Chinese National flag, a red cloth with spotted stars has been seen fluttering over Gunjur beach as a Chinese Fishmeal company, Golden Lead installs new pipes to discharge Industrial Waste into the ocean. This unprecedented move has prompted numerous environmental activists to brand this decision “a threat to our National Sovereignty”.

Just last month the community of Gunjur dug out waste pipes connecting to the ocean from Golden Lead, which the authorities ordered to be removed by the company. This order which was never enforced by the National Environmental Agency (NEA) has been reversed by Golden Lead in a move which will destroy the local marine life and has infuriated Gambian Nationalists.

According to a letter obtained by Gainako, the pipes were installed on the approval of the NEA Executive Director Momodou J Suwareh. The NEA had initially dragged the Chinese fishmeal company to court for failing to abide by the National Environmental Management Act 1994 (NEMA, 1994).

In a revealing article published last year, Hon. Suwaibu Touray of the National Assembly Select Committee on Environment stated that “when we contacted the NEA and the Ministry of Environment, they all came separately. We discussed with them and that issue came up. They explained that they have visited the site. They have seen what’s there and they’ve stopped. They kind of suspended them for a while at that time and they were preparing to take them to court. But then after a while the Government, the Executive decided to allow them to operate.

So that became a bit confusing, the roles. Because these people have the right to stop them and take them to court. But then incidentally the Government came and he has to use some other measures to see why that was the case. ”

This highlights that Government interference could be a factor in the Golden Lead saga. In early July 2017 news of Golden Lead’s settlement outside of court with the Gambian Government who bagged $25,000 in return, began making the rounds. Since then Gambian Authorities have refused to regulate Golden Lead’s fishing activities. The situation reached its peak when local Activist and former Information Minister Scattered Janneh was invited for questioning on the removal of the pipes which the Government had ordered to be removed by Golden Lead. 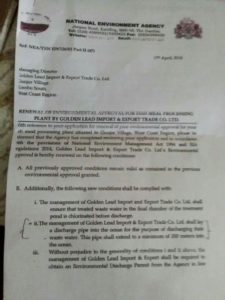 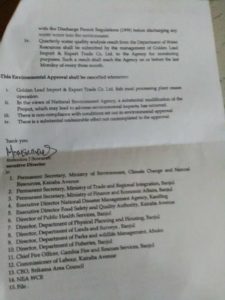 In a complete reversal, Gainako received an approval letter from the NEA, dated April 17th, 2018 signed by the Executive Director of the Agency Mr Momodou J Suwareh. The letter states that the Agency has completed a successful review of Golden Lead’s Environmental Approval.

Approval was then granted with some of the following conditions.

1.      That the management of the Golden Lead company shall ensure that treated waste water in the final chamber of the treatment pond is chlorinated before discharge.

2.      The management of the company shall lay down a discharge waste pipe into the ocean for the purpose of discharging their waste water. This pipes shall extend to a minimum of 350 meters into the
ocean.

3.      That the golden lead company shall be required having an environmental discharge permit from the Agency before discharging any wastewater into the sea.

The recent instalment of the new toxic wastewater pipes into the ocean and the hoisting of the Chinese national flag during the process by the golden lead fishmeal company have brought dismay to many environmental activists in the community of Gunjur and beyond. Many have highlighted that the use of Chlorine will lead to the destruction of marine life and adversely affect the environment.

Speaking to Gainako online newspaper, Buba Touray a native of Gunjur and the Secretary of the Environmental Concerned group in Gunjur said the issue of golden lead fishmeal company has now become a national concern for many environmentalists in the country. According to him, the people of Gunjur are going to organise themselves peacefully as environmentalist and concern citizens of the community and walk to the NEA Headquarters demanding for the authorities to remove the pipes discharging fishmeal waste into the ocean.

‘’We want the NEA to give us an explanation of where they gained the authority to allow Golden Lead to install new waste pipes into the ocean. Though it pains us a lot as an affected community but despite that we are going to follow the rightful laws in order to have final result from the NEA.” he said.

He pointed out that the state cannot afford to risk the health of its own people by allowing a foreign company to damage the environment and the people living in the surrounding. He highlighted that the community is demanding for more thorough regulation of the company to avoid destroying the environment.

As an experienced Environmentalist, lab tests were once conducted by a native of Gunjur residing in the US which indicates that water from the infected water could lead to severe brain disease in the next five to seven years if the fishmeal plant continues to pump the untreated toxic waste water into the sea.

He said what is more frustrating on the issue of golden lead is that some prominent community leaders such as the District chief, Alkali, and the Majority leader were present together with the NEA officials when the Chinese are laying back the waste pipes into the sea. 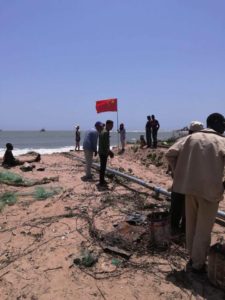 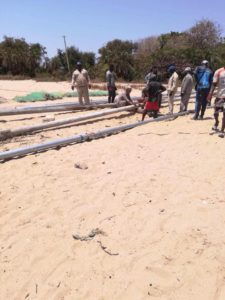 Lamin Jassey also an environmentalist and a native of Gunjur said he, for now, cannot blame the Golden Lead fishmeal company for the instalment of the waste pipes but rather the politicians whom he accuses of knowing everything related to the operation of the company. He stated that he almost drops tears when he heard of the company hoisting their national flag up in the sky whiles returning back their waste pipes into the sea which he said shows as an indication of having more authority over them in our territory.

“We wanted to go to the beach and as the Chinese are fixing back the pipes we will also be digging them out, but with the advice from some of our leaders, we cancel going there. I can tell you that some of us might be in jail today because we are going to do it with no regret.’’ He said the community of Gunjur and it’s sympathizers are preparing to stage a peaceful protest at the NEA house where statement concerning the golden lead fishmeal plant will be read in front of the NEA officials.

“We are currently in preparation for a protest at the NEA where we are going to voice out our demands and read out a statement for all to hear. The preparation is high, we have forums where people are joining every day for the protest.’’

When Gainako contacted the Golden Lead ‘s country representative, Bakary Darboe he declined to comment on the matter and simply said that questions relating to the wastes pipes should be directed to the NEA and not Golden Lead company.

When Gainako tried to contact the PRO and the Director of NEA in order to shed light on the approval letter given to the Golden lead Fishmeal Company both declined to comment on the matter.