You are at:Home»Business Economy»China donates Rice as Golden Lead settles outside court

The Gambia is facing a difficult choice between protecting its environment or receiving more donations from China. On Friday, June 30th, AfricaNews reported that Chinese fishmeal company, Golden Lead had settled out of court as it faced charges of environmental pollution in Gunjur. Golden Lead agreed to pay $25,000 US dollars and take immediate measures to treat its wastewater. Only three days later, on Monday 3rd July 2017, Standard Newspaper reported that China donated 2,500 tonnes of rice to the Gambia Government. China has a long-standing donor relationship with The Gambia. Earlier this year in May 2017, Jollofnews reported that the Gambian Government signed a $50 million US dollars grant with China for the construction of an International Conference Center in the tiny West African nation.

On Saturday 1st July 2017, in an exclusive interview with Suwaibu Touray (National Assembly Member for Wuli East and Select Committee member of the Environment Committee), he disclosed that both the Ministry of Environment and the Environmental Agency ordered the closure of Golden Lead only for the Government to reverse this decision. The interview is available below. Besides Chinese Trawlers, local fishing boats from Gambia and Senegal have also been accused of dumping unwanted fish on the river bank and ditches.

Demba Baldeh: There is a massive pollution going on in the Gunjur area by a Chinese company the Golden Lead. What can you tell us about the Golden Lead, is this committee [National Assembly Select Committee for Environment] aware of what is happening with the Golden Lead and their recent negotiations with the Government?

Suwaibu Touray: When we contacted the National Environment Agency and the Ministry of Environment, they all came separately. We discussed with them and that issue came up. They explained that they have visited the site. They have seen what’s there and they’ve stopped. They kind of suspended them for a while at that time and they were preparing to take them to court. But then after a while the Government, the Executive decided to allow them to operate.

So that became a bit confusing, the roles. Because these people have the right to stop them and take them to court. But then incidentally the Government came and he has to use some other measures to see why that was the case. But then from the investigation, it was proven that the Golden Lead said they were not responsible for the dumping of the fish at the ditch or at the banks of the river. So, but they were asked to make a clean-up of that area which they agreed to. They were also asked to briefly suspend and make a clean-up which they have done according to my knowledge. Now they are being monitored to make sure no such thing like that occurs there again.

A community-based group, Gunjur Development Fund has been monitoring the situation and advocating for better environmental protection in their local community. According to Planet Earth World News, biomedical scientist Mr Ahmed Manjang has been ringing the alarm bells on the environmental pollution facing Gunjur. We are allowing foreign investors to operate fishmeal factories to overfish our waters and pollute our environment, he said. ‘What if all the fish is gone, are we going to eat each other?’. According to the scientist, Gunjur’s water system is poisoned with dioxins created by ammonia and sulphur. Dr Manjang explains that people with different forms of cancer will suffice in the near future as pollutants enter the body through eating cattle meat grazing from dioxin infected grass with dioxins. 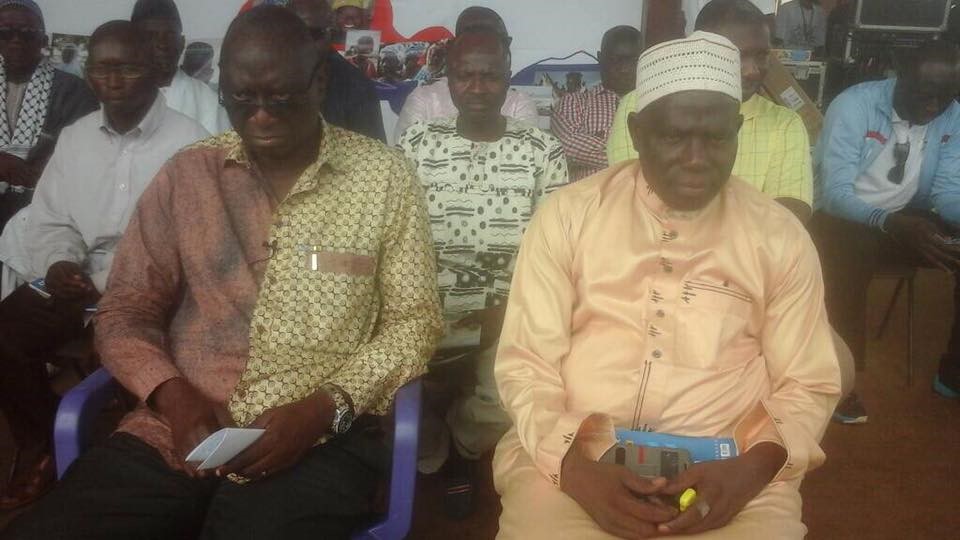 At a question and answer session covered by local television broadcaster, GRTS, Fisheries Minister, James Gomez, was quizzed about the strong odour from the fish meal Factory at Gunjur. To which he responded, “in other countries, the smell you are complaining about is referred to as the smell of money.” Such comments have led community activists to protest that “the nation’s environment is in the wrong hands.”

The Government’s interference in the closure of Golden Lead Fishmeal Company has led to public concerns that China’s donor relations could leave Gunjur at the losing end of pollution continues. On Monday 3rd July, renowned Activist Dr Amadou Scattred Janneh from Gunjur posted the picture below with the caption. “Gunjur Beach today, Monday, July 3. You think we are just making noise? This is a disaster that should concern us all regardless of partisan political affiliations. Something must be done. We can’t allow this to continue.” 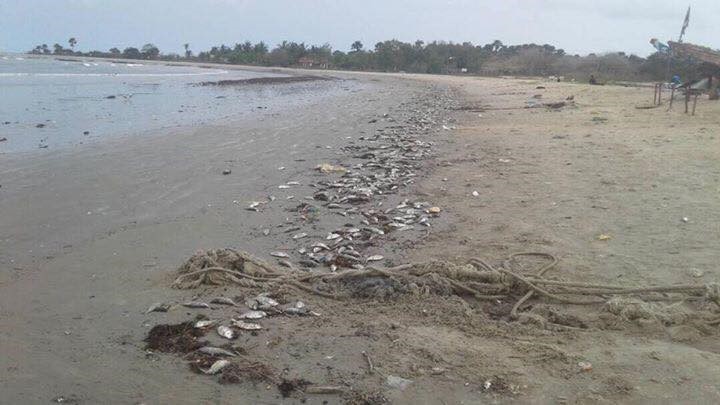