Asked if the Government’s $1 Million contribution was coming from the Covid 19 Emergency Fund or Nana’s budget. To this Mr Njie explained that “the D50 Million Dalasis ($1 Million) was planned even before the advent of Covid 19 the Government already made a commitment that they will contribute D50 Million Dalasis towards the Social Assistance program called the Nafa. So, it’s not coming from the Covid fund but the Government of the Gambia like I said already committed this and it was going to come from the Ministry of Finance as the local fund contribution.” 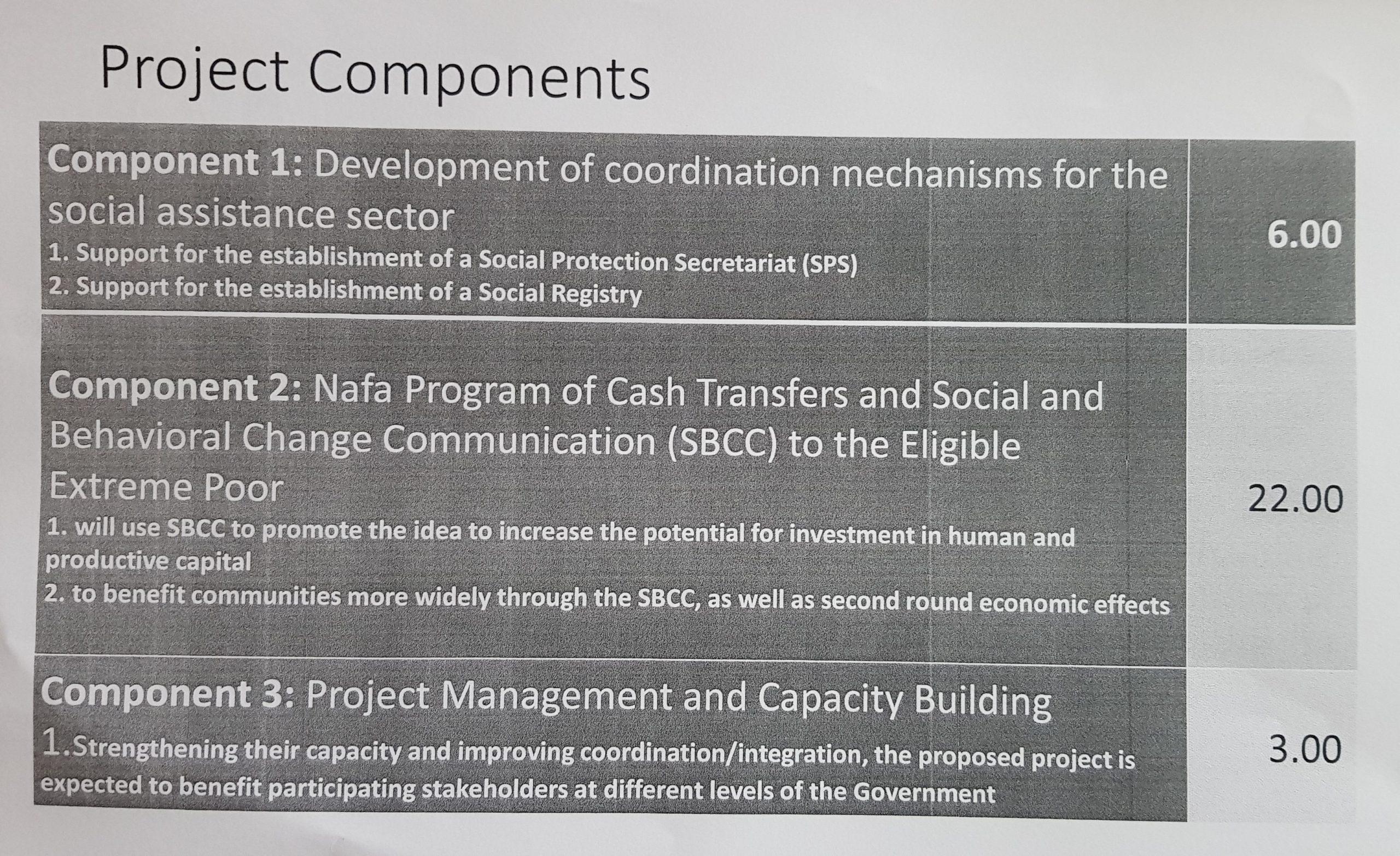 According to Nana Deputy Director Dr Hamat Bah, the project is to help coordinate all social welfare projects. A Nana press briefing paper highlighted that the project aims to “target approximately 15,606 extremely poor households in the 20 poorest districts in The Gambia” and that this “equates to approximately 40 per cent of the extremely poor households in The Gambia”.

“$6 Million was allocated to the Component 1 and $22 Million to the Nafa program and $3 Million to Project Management and Capacity Building.” Lamin Njie, Finance Manager

According to Nana officials, they were about to launch the Nafa project before the Coronavirus Pandemic, however “with the advent of the Covid-19 Pandemic and the stringent measures to prevent and contain the virus as well as to mitigate its impact on food and nutrition security the Nafa program that I talked about, the 22 Million Dollars was restructured to contribute to the fight against Covid 19 and that restructuring we created a subcomponent called Nafa quick.”

“Because Covid is here we have to mitigate the impact of Covid so we created Nafa Quick.” Lamin Njie, Finance Manager 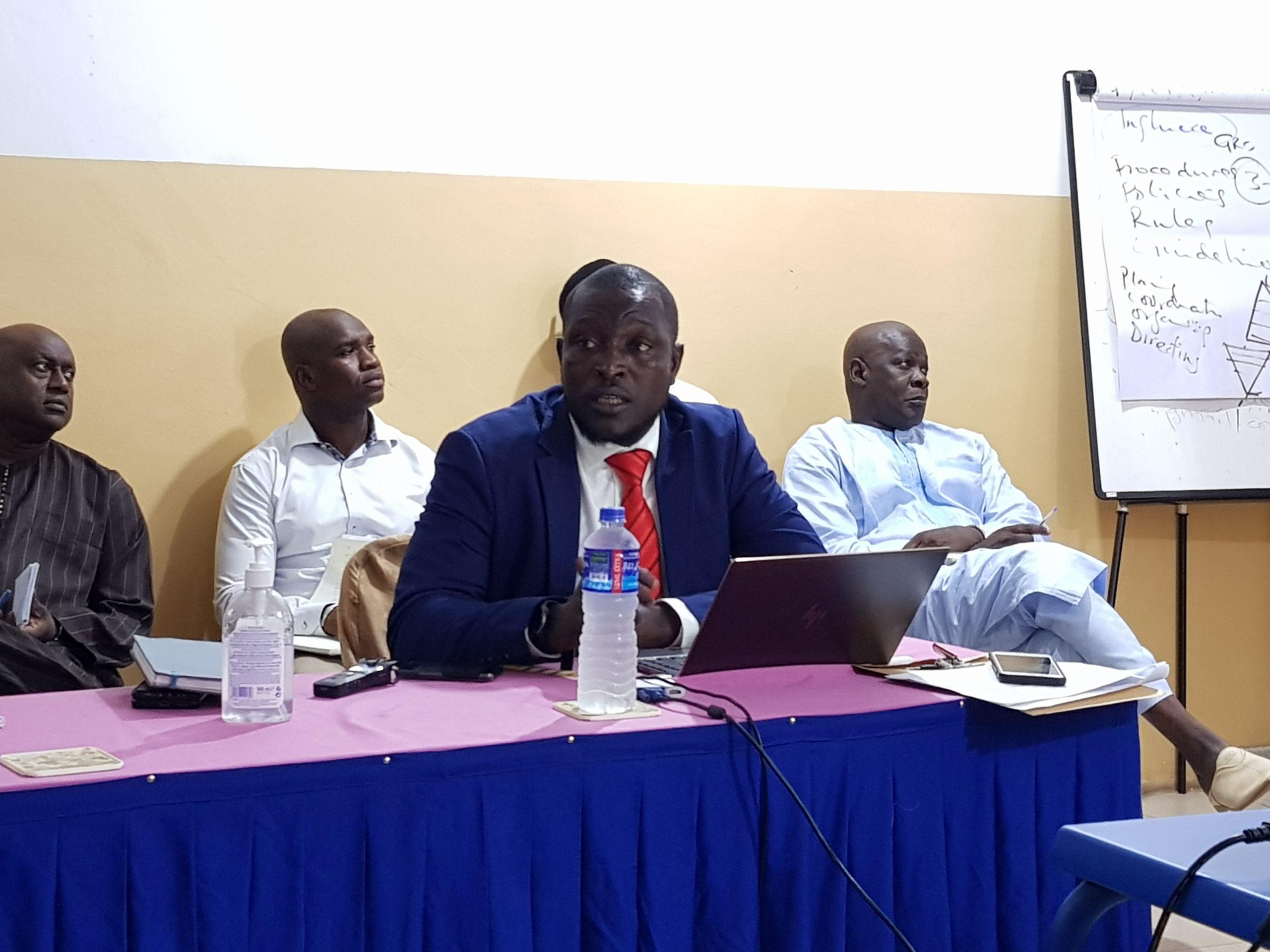 During Mr Njie’s presentation, he explained that “we are here to do this press briefing because we want to go into the Nafa Quick as soon as possible and it’s important for people to know that Nana was working on a project but because of Covid we want to respond quickly. We restructured the project, took out $10 Million Dollars to roll out a universal cash transfer to 30 districts.”

“We intend this cash transfer to cover the lean season, that is between July, August, September up to October…. This project we estimate will take up to $10 Million of the original project sum” said Mr Njie.

In his presentation, Mr Njie explained that “The Nafa Quick intends to contribute to the mitigation of the social and economic impact of Covid-19 on the population by providing immediate universal cash transfer of D1,500 per month (2 transfers of D3,000) within 4 months to about 83,000 households in the 30 districts. These 30 districts include all the Foni’s, some parts of North Bank, Lower River Region, Central River Region and Upper River Region. These are the 30 districts we are targeting for the Nafa Quick.”

When the total amount to be transferred of D6,000 is multiplied by the total number of households the total amount of cash transfers come to a staggering D498 Million Dalasis, at today’s rate of $1 to D51.82 this is approximately $9.61 Million. This is very close to the $10 Million referred to by Mr Njie.

When a question was asked on how much money will be paid to the cash transfer business Reliance, Mr Njie explained that “the total service fees normally in every cash transfer program is between 4 to 5 or 6 per cent. In our case, we are able to get 3.7% maximum as the service fee. That’s the amount we pay to reliance to do this. Reliance charges us about D85 per household per transfer. If we had gone for 4 transfers, we would have paid 6.4% service fee but we are going for 2 cash transfers we’re actually getting 3.7% as the transfer fee. The service fee should be kept at a minimum.”

Deputy Director Bah explained that the figures quoted are approximate figures because some people can choose to abstain. “For the Nafa Quick once a district is identified it’s for everybody. Except somebody who says look, I have enough and before I take the money and another household which needs it can get it, I will abstain. But otherwise, the districts that are identified every household in the district will now get the Nafa Quick.”

What About Greater Banjul and KMC and the List?

One of the key questions was if the Greater Banjul and the Kanifing Municipal Council regions will be afforded another package. In response, a senior Nafa official explained that “the regions that are most hard hit are those districts we are targeting. That’s why for this project we are targeting these areas but our wish is to mobilise more resources to cater for every extreme household in the country including Banjul and KMC.”

In addition, Deputy Director Dr Bah reiterated that “these districts were already identified as the poorest of the poor.”

Nana’s Social and Behavioural Change Communication (SBCC) Manager, Mr Aziz Ceesay also explained that “during payment days we will have a registration/enrolment team and any community that did not receive the rice that the government gave you. You will definitely be enrolled. That’s the list that we have. We wanted to go for primary data collection but since the government came and said the Governors through their Chiefs and Alkalous will be collecting data why do we have to do a similar program so we just banking on what they have but we know there are gaps.”

Asked if any effort will be made to confirm that the people on the list have already received the rice and other food distributions from the Government since the same list is being used to coordinate the cash transfer. In response, Deputy Director Dr Bah explained that this “is not our role. That’s not why we are there. We are not there to confirm whether you have received or not received but we are using the same data.”

To this, Deputy Director Dr Bah was adamant that “you have to understand that people have mandates. What’s in our mandate you go and do that. It is not our responsibility to go out there and to confirm who other institutions like the National Disaster Management Agency have distributed rice and oil and so on to. So, we have to be careful as to what we do and don’t do. So, it could be good data for us but it’s not something that we need in order to do our work. So we will go and do our work these people need the cash that we have. Immediately we give that cash and don’t ask unnecessary questions.”

Deputy Director Bah’s response was met with a simple question “you think that’s an unnecessary question?” In his defence Finance Manager, Njie explained that “these two programs are complimenting each other but they are not looking after each other how much is done. It’s a complimentary exercise.” 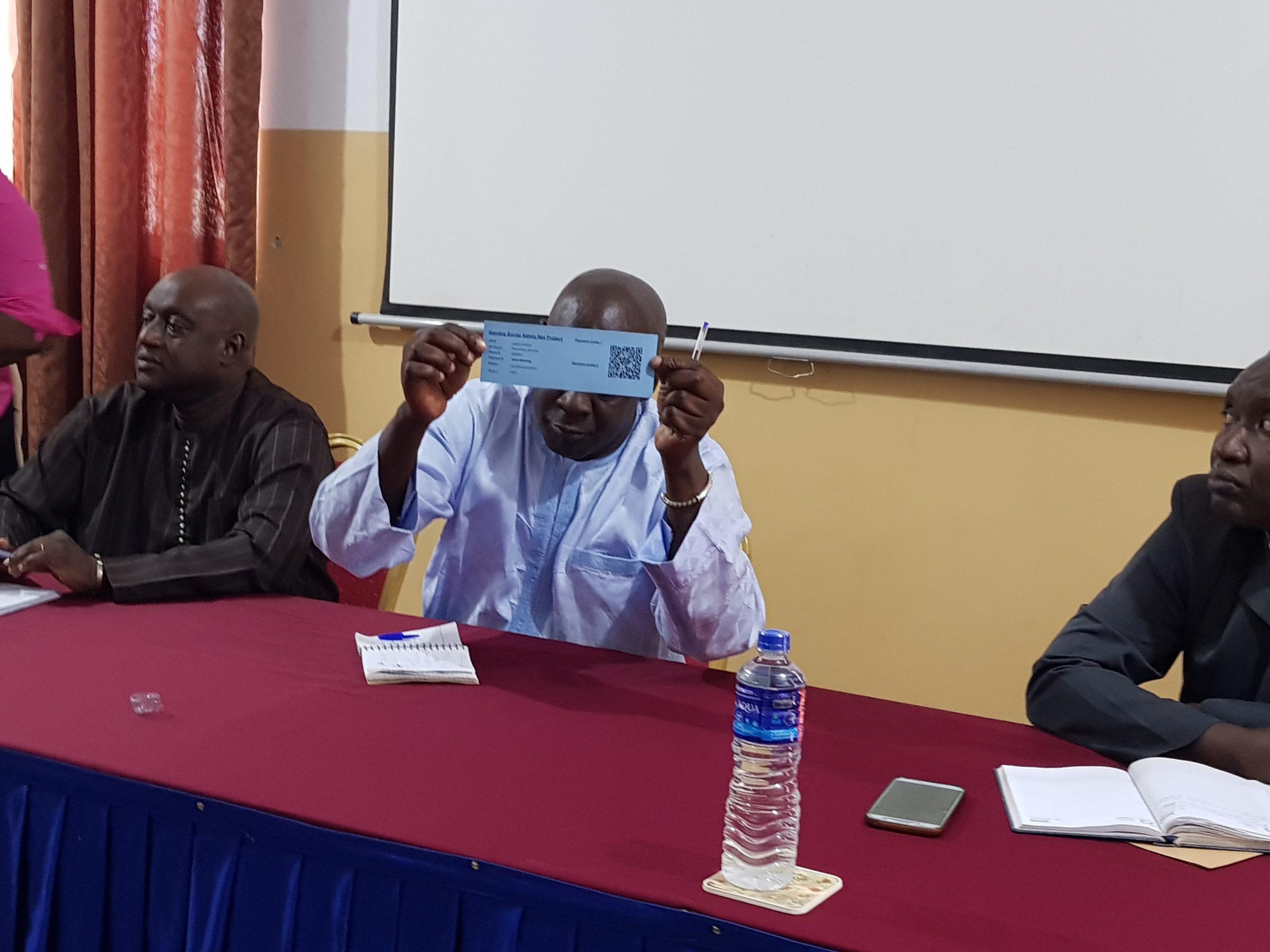 Studies Show Women Make Better Use of Money for the Household

According to a presentation by Nana’s Social and Behavioural Change Communication (SBCC) Manager, Mr Abdul Aziz Ceesay “preferably we want the female to be the principal recipient of the household. She’s taking on behalf of the household. We’re also asking them to identify a substitute that in the absence of this person the substitute can collect.”

In response to Nana’s preference that women should receive the money, a number of journalists asked why this was the case. In response, Mr Ceesay explained that research shows “that when women receive anything with cash on the household most of the time the money stays in the household. This is the only reason why we prefer women to receive this cash. But if they insist that in my household women will not receive it there will not be any further discussion on that, of course, we’ll allow that to happen.”

Deputy Director Dr Bah also added that “research has shown and experience has also shown that women-headed households receiving some of these social protection benefits make better use of it that we men. We men are in trouble here.” 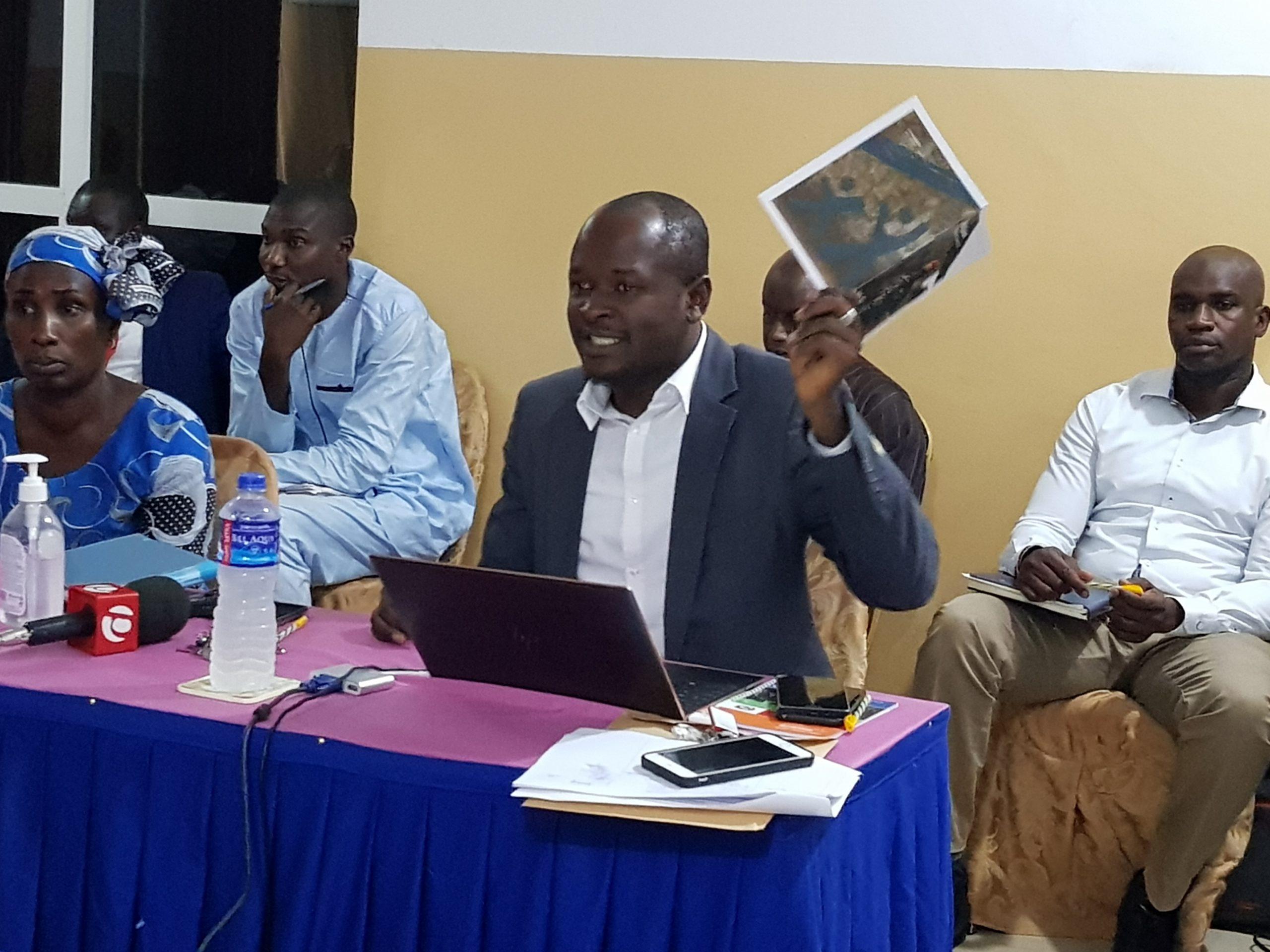 One of the components which stood out in the Nafa Quick Package is the Grievance Redress Mechanism (GRM) which allows for the resolution of grievances that arrive during the cash transfer process. During his presentation, SBCC Manager Mr Ceesay explained that “anywhere money is involved so many people will want to receive the cash and in that we understand there must be some grievances. If there are grievances where will they go to lodge their grievances? So, we deem it fit as a project management team to set up a Grievance Redress Mechanism across the country ranging from where the cash transfers will take place at the level of the community. We have set up a GRM within the Village Development Committees (VDC).”