You are at:Home»Corruption»Gambia ranked 74th out of 128 Countries on Rule of Law

By the World Justice Project

WASHINGTON, DC (11 March 2020) – The World Justice Project (WJP) today released the WJP Rule of Law Index® 2020, an annual report based on national surveys of more than 130,000 households and 4,000 legal practitioners and experts around the world.

The WJP Rule of Law Index measures rule of law performance in 128 countries and jurisdictions across eight primary factors: Constraints on Government Powers, Absence of Corruption, Open Government, Fundamental Rights, Order and Security, Regulatory Enforcement, Civil Justice, and Criminal Justice. The Index is the world’s leading source for original, independent data on the rule of law.

A new addition to the WJP Rule of Law Index this year, The Gambia placed 74th out of 128 countries and jurisdictions worldwide. The Gambia’s score places it at 10 out of 31 countries in the Sub-Saharan Africa region* and 5 out of 19 among low income** countries.

Denmark, Norway, and Finland topped the WJP Rule of Law Index rankings in 2020. Venezuela, RB; Cambodia; and the Democratic Republic of the Congo had the lowest overall rule of law scores—the same as in 2019.

More countries declined than improved in overall rule of law performance for the third year in a row, continuing a negative slide toward weakening and stagnating rule of law around the world. The majority of countries showing deteriorating rule of law in the 2020 Index also declined in the previous year, demonstrating a persistent downward trend. This was particularly pronounced in the Index factor measuring Constraints on Government Powers.

The declines were widespread and seen in all corners of the world. In every region, a majority of countries slipped backwards or remained unchanged in their overall rule of law performance since the 2019 WJP Rule of Law Index. 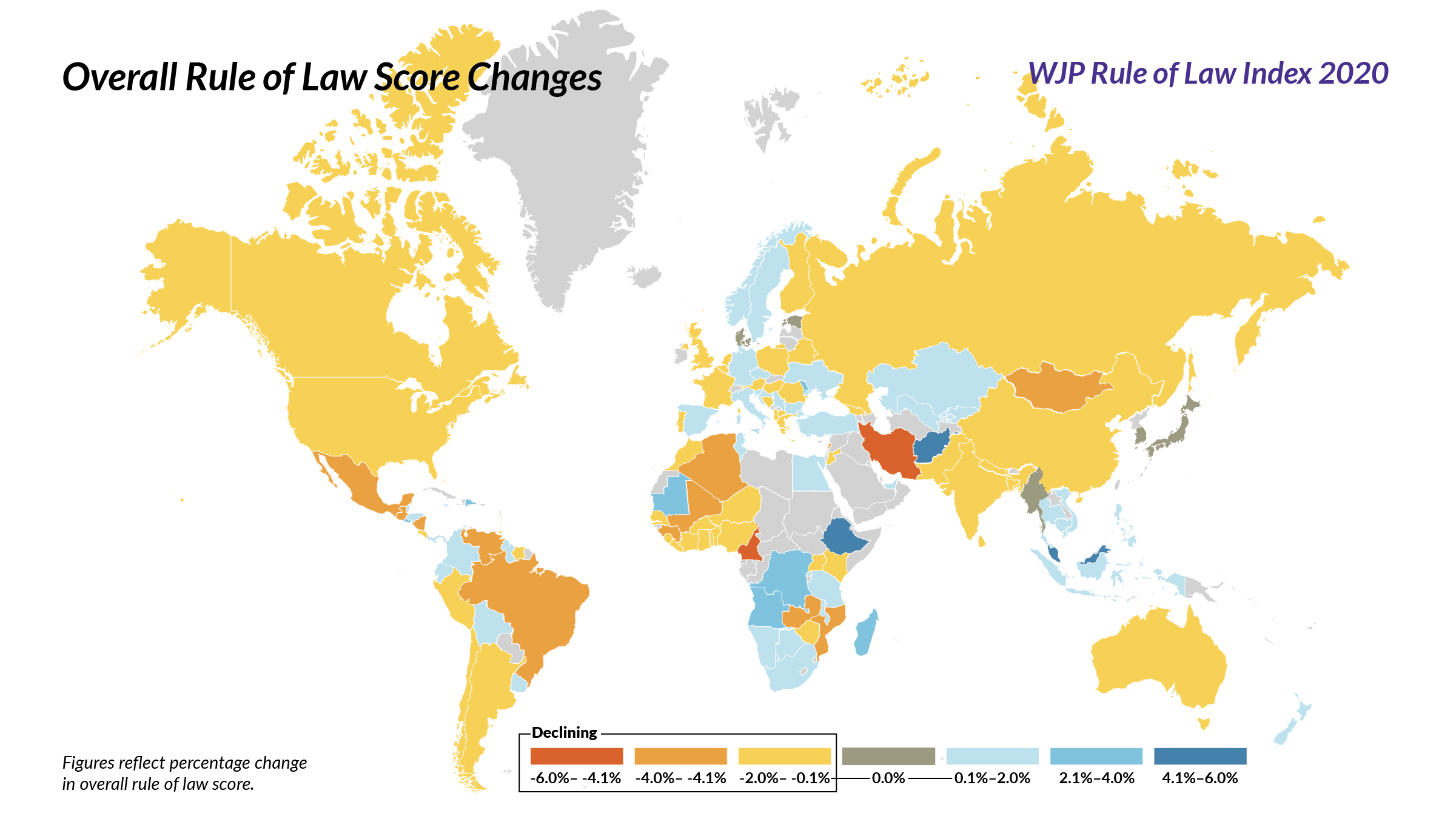 The single biggest decline by factor over the past five years was Egypt’s and Poland’s score for Constraints on Government Powers, with an average annual decline of -8.5% and -6.8%, respectively.

“The rule of law is not just a matter for judges or lawyers,” said William H. Neukom, WJP founder and CEO. “It is the bedrock of communities of justice, opportunity, and peace. We are all stakeholders in the rule of law and therefore we all have a role to play in upholding it. The 2020 Index underscores that we have our work cut out for us.” 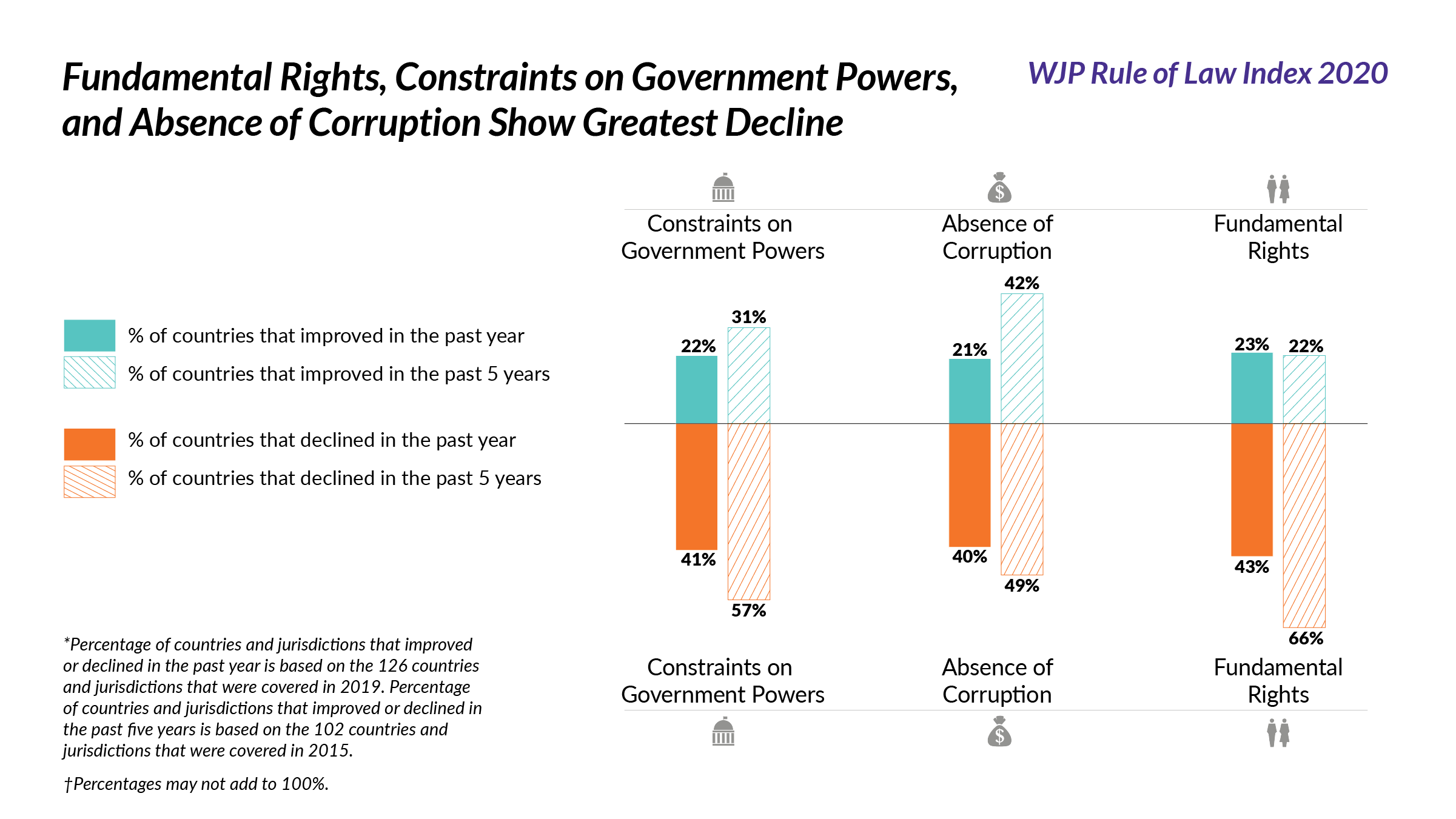 WJP Countries which improved and declined

ABOUT THE WJP RULE OF LAW INDEX

The WJP Rule of Law Index® is the world’s leading source for original, independent data on the rule of law. Now covering 128 countries and jurisdictions, the Index relies on more than 130,000 household surveys and 4,000 legal practitioner and expert surveys to measure how the rule of law is experienced and perceived worldwide. The Index provides current and reliable information to policymakers, civil society organizations, academics, citizens, and legal professionals, among others, and is intended to encourage policy reforms, guide program development, and inform research to strengthen the rule of law.

ABOUT THE WORLD JUSTICE PROJECT:

The World Justice Project (WJP) is an independent, multidisciplinary organization working to create knowledge, build awareness, and stimulate action to advance the rule of law worldwide. Effective rule of law reduces corruption, combats poverty and disease, and protects people from injustices large and small. It is the foundation for communities of justice, opportunity, and peace—underpinning development, accountable government, and respect for fundamental rights.

The World Justice Project defines the rule of law as a durable system of laws, institutions, norms, and community commitment that delivers: accountability, just laws, open government, and accessible justice. Learn more about these four universal principles and our work at www.worldjusticeproject.org