You are at:Home»Editorial»Gambia much improved in Mo Ibrahim’s 2019 Index for African Governance

Every year the Mo Ibrahim Foundation for African Governance Report ranks African countries in various categories and hands out prizes to African leaders in an effort to promote and monitor good governance in Africa. The last winner of the Mo Ibrahim Prize was Liberian President Ellen Johnson Sirleaf who last won it in 2017, since then no African leader won the prize last year, sparking deep reflection across the African continent on Good Governance.

This is what the Mo Ibrahim Foundation said about their 2017 Laureate “in very difficult circumstances, she helped guide her nation towards a peaceful and democratic future, paving the way for her successor to follow.” Together with other West African Leaders in the Economic Community of West African States (ECOWAS) she helped spearhead negotiations which compelled a reluctant President Yahya Jammeh to vacate State House after loosing elections in December 2016.

Many Gambians would remember the key role she played in The Gambia, the effect of her leadership resonated across the country when ex-President Jammeh called her and televised their conversation on the state broadcaster without her consent. Nonetheless, she held her own and did not succumb to President Jammeh’s unusually polite requests. After this breach of trust made international news, she stayed calm and together with the ECOWAS sent ECOMIG and Senegalese troops to ensure a peaceful transition of power in the Gambia in January 2017.

It’s important to note that data used in the publication of this 2019 report is based off data for the years 2014 to 2017 as can be seen at the top of each data sheet. Take the figure above for example which demonstrates that The Gambia’s Statistical Capacity has declined from 2014 to 2017 and is in the range of 0 to -5. The data highlights that The Gambia’s statistical capacity trend has improved more than 14 countries, however, 36 other countries have improved more than The Gambia.

The African average, highlighted in Yellow is on the increase (range 0 to +3) meaning that most of Africa is improving and that The Gambia needs to catch up. It must be noted that the data shows trends so even though Gambia is shown to have a better trend than other countries those countries could have better actual scores and lower trends. Such countries would still rank lower than The Gambia. The reverse could also be true, i.e. countries with lower actual scores could rank above The Gambia if their trend shows an increase.

I hate to be the bearer of bad news but the first mention of The Gambia in the report is a negative one, however, overall there are much more positives to take away from the report for The Gambia. I’m sure this will please a lot of Government Officials. The executive summary mentions this about The Gambia’s Sanitation ranking.

“DRC, Gambia, Madagascar and Nigeria have all deteriorated since 2014 in IIAG’s Access to Sanitation indicator.” 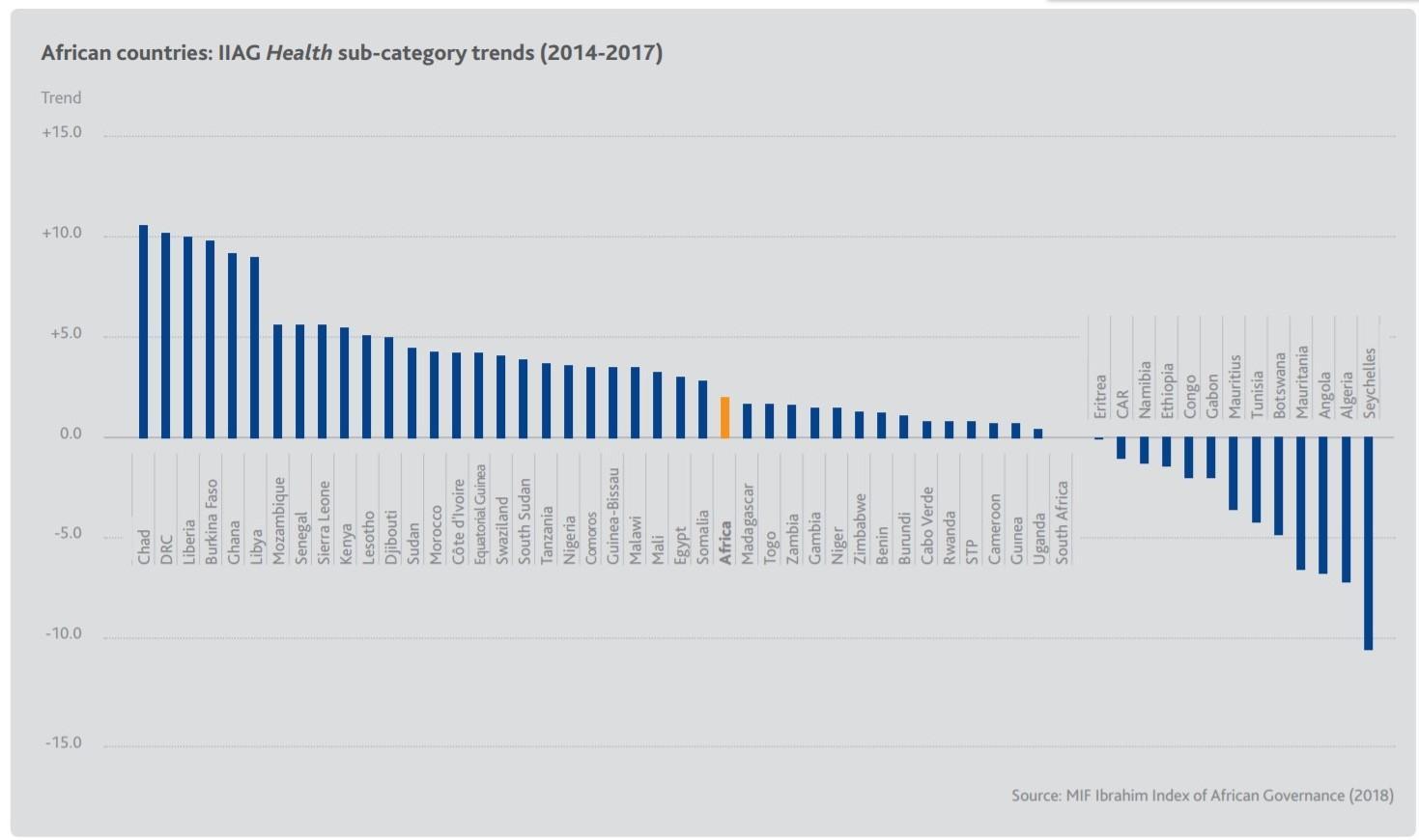 There is a lot more good news for The Gambia in this report than bad news. There are at least five categories in which the Gambia is mentioned favourably in contrast to the two negative mentions which all occur in the health sector.

The biggest category winners for The Gambia are the Education Sector, Gender, the Rule of Law, Transparency and Accountability and National Security. At this stage I must remind our readers that these indicators measure trends from 2014 to 2017 and it is our hope that the 2019 scores show a genuine improvement, however, some of the improvements mentioned rank The Gambia and Morocco as joint highest in Transparency and Accountability.

Across Africa The Gambia is second highest for Absence of Corruption in Government Branches and Accountability of Government & Public Employees. Considering that the data is covering 2014 to 2017 a period in which the Gambia transitioned from Dictatorship, this could have a huge impact in data showing huge increments in good governance. It will be interesting to see if that trend of improvement continues into 2018 and 2019.

“African average trends since 2014 in IIAG Rule of Law indicators