Claim: “…and this was the Management’s response, which, deliberately was ignored by the auditors and they decided not to incorporate it into the Audit Report”

Two months after the National Audit Office (NAO) released its Phase 1 Audit Report on the Government’s Covid 19 Response, the Minister of Health, Dr Ahmadou Lamin Samateh, assembled members of the press to lament that his Management’s Responses to the audit findings were “deliberately omitted” from the report by the auditors.

“…and this was the Management’s response, which, deliberately was ignored by the auditors and they decided not to incorporate it into the Audit Report,” Samateh claimed during a press conference held in April 2022 (Watch Video: from 21:01 to 21:15 minutes).

On February 9, 2022, the NAO published on its website, a damning “Audit Report on the Government COVID-19 Response – Procurement and Distribution of Medical and Food Items” which stated that the Ministry of Health (MoH) could have saved up to D148, 858, 492 from procurements including Turkish medical supplies in April 2020.

The publication of the full report was followed by the NAO’s release of the Summary Report (a simplified version) on the Gambia government’s Covid-19 Response on April 23, 2022. It was titled: “Phase 1 of The Gambia’s Covid-19 Response: Procurement and Distribution of Food and Medical Items in the Greater Banjul Area”.

Health Minister said his ministry submitted a management response and supporting documents to the NAO but it “was neglected”.

He further highlighted that the pre-procurement negotiations with the company Turkish Medical Services were also omitted in the Audit report.

In this regard, Health Minister Samateh noted that his office “totally disagreed with this audit finding” because the MoH’s management response was “deliberately ignored” by the Auditors and that “they decided not to incorporate it into the audit report”. Watch the video from 12:12 to 21:13 minutes.

“The Ministry believes that the series of evidence provided as explained in not less than two management responses backed with the required supporting documents continued to be deliberately ignored thereby inimical to the principles of fair and objective reporting in this regard,” Samateh was also quoted by Kerr Fatou to have said. “The Ministry considered the NAOs’ disregard of the ministry’s view as deeply shocking and a manifestation of the audit team’s adamant resolve to not only attract cheap public attention but also a reflection of aggressive intent seen in some of the audit team members during the Ministry’s interaction with them while on the exercise.”

In an exclusive interview with the NAO’s Auditor General, Mr Karamba Touray, he said that his Office did not omit any of the Ministry’s covid-19 management responses.

Fact-Check Gambia looked into the full audit report to establish whether or not the auditors indeed omitted the ministry’s responses to the audit queries.

Our findings revealed that MOH’s Covid Management Responses were indeed included in the Audit Report and contained in pages 112 to 114.

One of the concerns detailed in the Audit Report and referred to by the Minister of Health during his press conference is the “failure to negotiate contract terms” on the procurement of medical items worth over D197 million.

The Audit Report reveals that the “MoH signed a contract for procurement of medical items by World Bank through the Project Coordination Unit (PCU) amounting to $3,946,637 equivalent to about GMD197,331,850 without being negotiated contrary to” section 6.9 of the World Bank Regulations which focuses on proportional fit for purpose and value for money.

It can be seen that for this particular finding, at least three pages of Management Responses have been included from pages 112 to 114. This is replicated throughout the report which features over 50 different management responses. 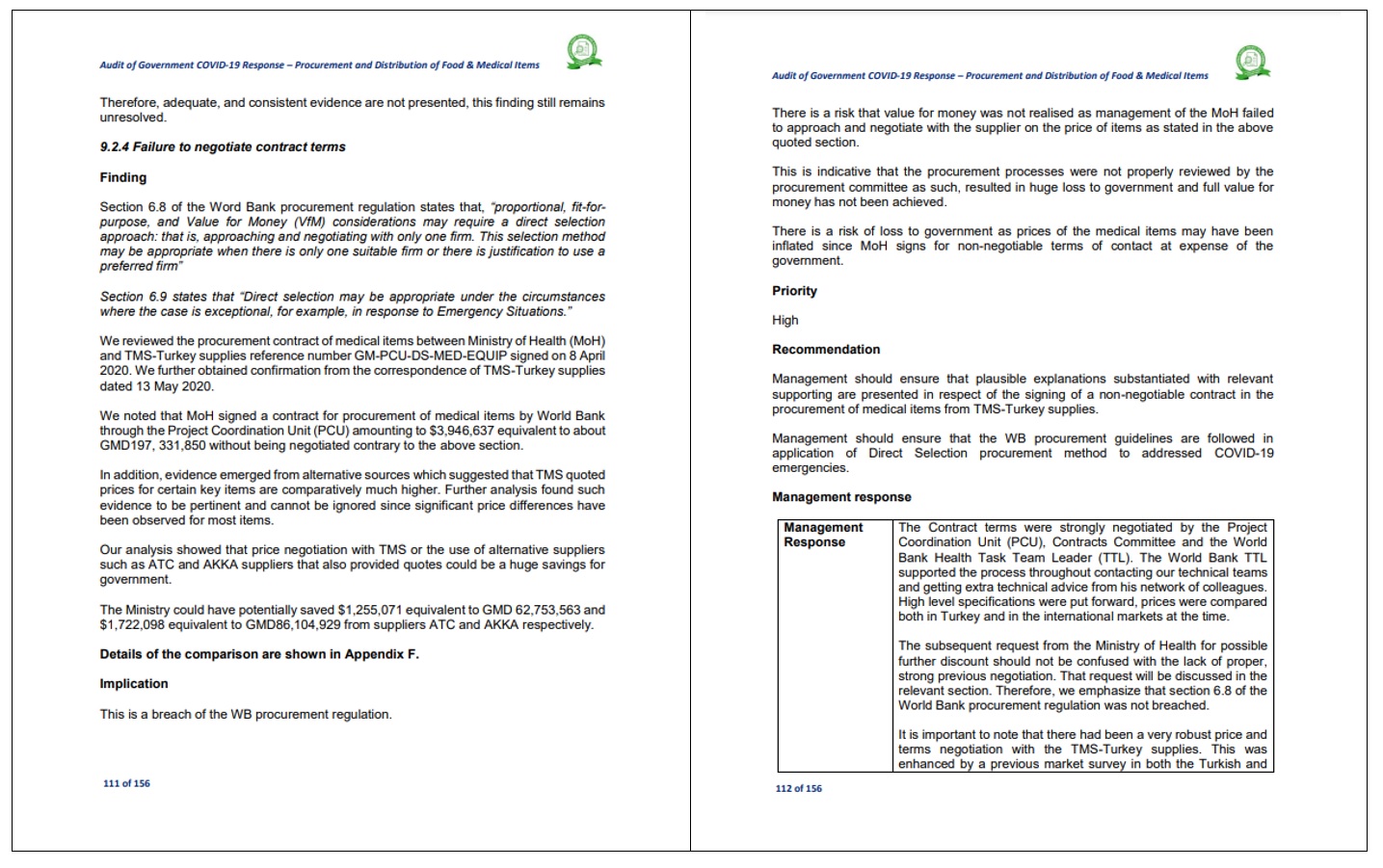 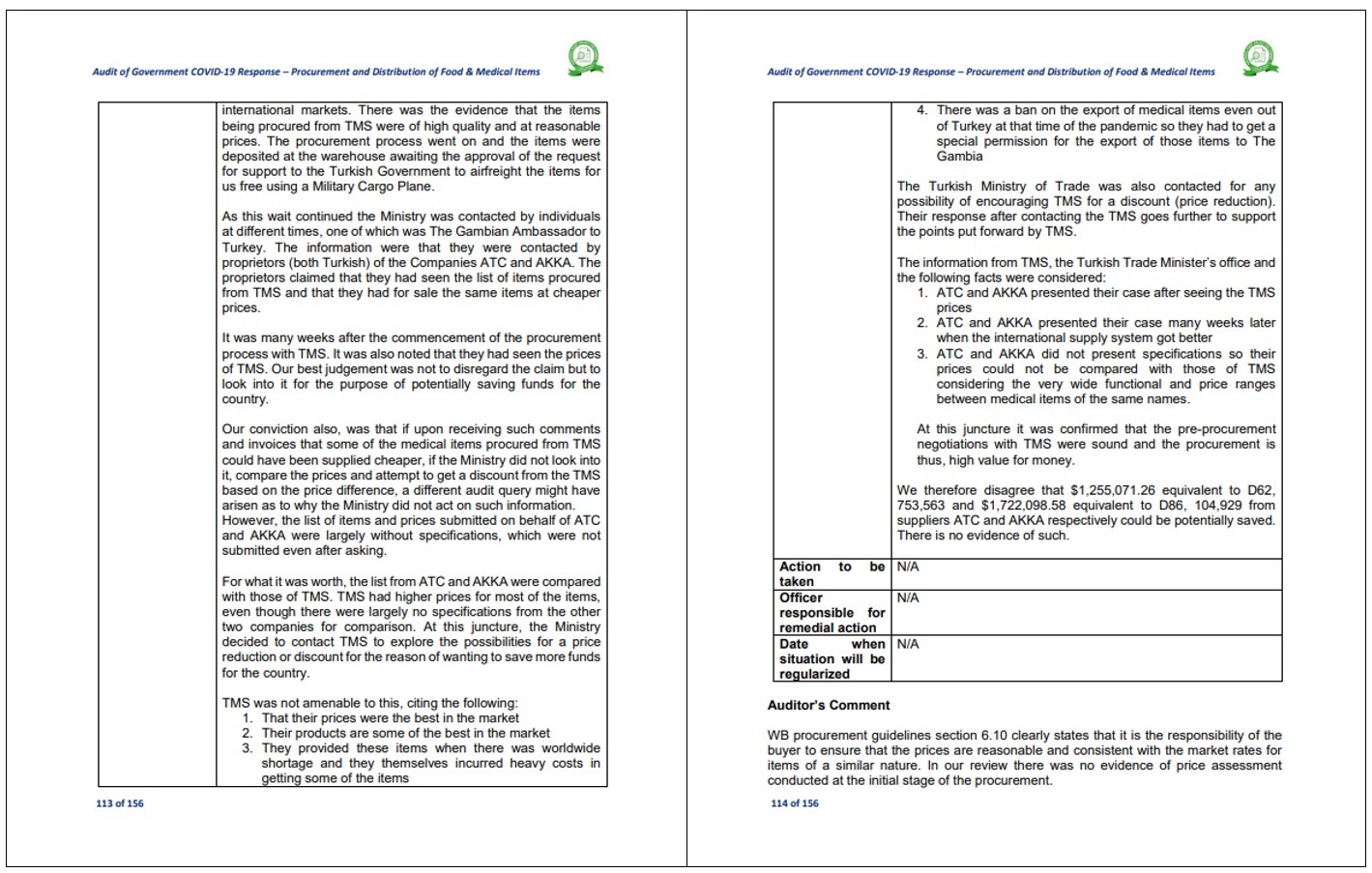 Verdict: Having reviewed the Phase 1 Audit Report of Government’s Covid-19 Response we found the Minister of Health’s claims that their Management Responses are not included to be FALSE.

It’s important to note that the Covid 19 Report issued by the NAO in April 2022 focuses on the first phase which highlights funds spent on the procurement and distribution of food and medical items. Another Audit Report is being prepared for publication sometime this year as Phase 2 of the Government’s Covid-19 Response.