Chapter XIII, Part V of the Draft Constitution focuses on The Gambia’s budget process. In comparison the budget process is included in Finance in Chapter IX, Part I of the 1997 Constitution. One of the biggest changes in the Draft Constitution is the requirement for the Finance Minister to table the estimate of revenues and expenditure (henceforth called Budget Estimate) sixty days before the end of the Financial year and provides no deadline for the National Assembly (NA) to pass the Annual Budget [248 (1)]. If the current Draft Constitution passes through a referendum, National Assembly Members (NAMs) will have an additional thirty days to review the Budget Estimate. This allows more time for NAMs to scrutinise the second most important national document, yearly.

According to the 1997 Constitution currently in effect, NAMs are mandated to debate and scrutinise the Budget Estimate within 14 days after being laid at the NA [152 (1A)]. This year the Finance Minister laid the Budget Estimates at the NA on Monday, 18th November and are expected to approve it by Friday, 6th December 2019 (see image above).

As demonstrated by the United States of America in 2018 – 2019, which was shut down for 35 days, a Government shutdown is possible if for some reason the Budget Estimate is not approved by the NA.

In The Gambia’s context this could occur if a Budget Estimate is not approved after the 4-month period allowing the President to approve funds. To avoid such a scenario the Draft Constitution could include a provision in section 249 stating that;

“In any case if the annual budget is not approved after the commencement of the financial year the National Assembly shall either; adopt the remaining 8 months and two third of the preceding year’s Approved Budget sum for appropriation or approve an annual budget with the Executive, no later than 4 months into the financial year.”

The rationale for this is thus; if the President has approved 4 months and 1/3 of the previous year’s Approved Budget a default budget has already been adopted. To avoid a government shutdown because of a deadlock between the NA and the Executive this provision will compel both Institutions to either compromise or continue the year with the remaining sum, two thirds of the preceding year’s Approved Budget sum. 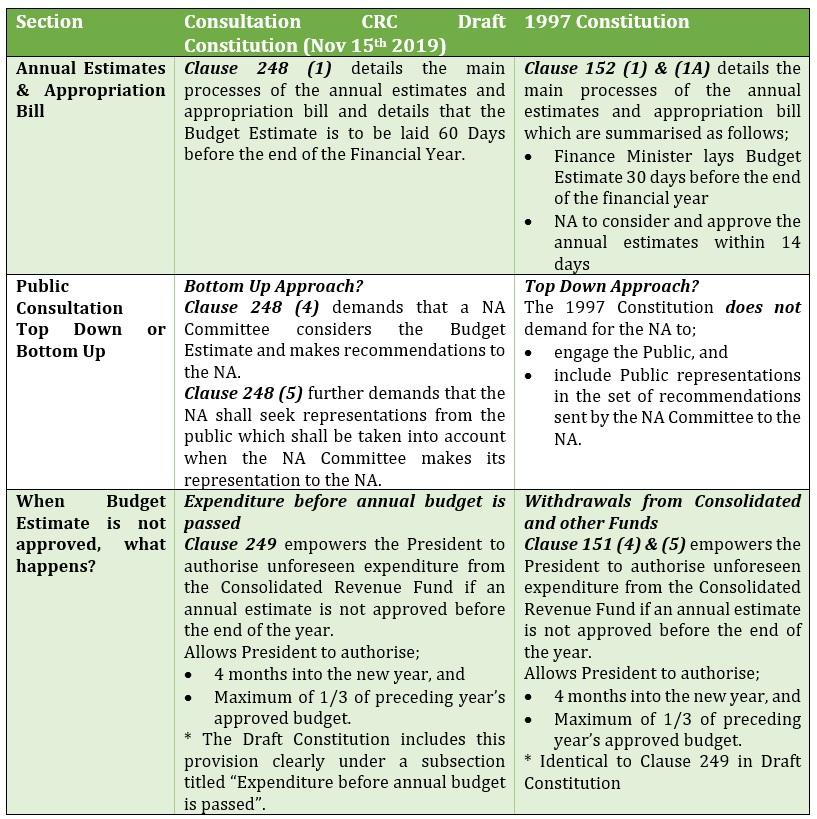 Most importantly, the Draft Constitution includes a number of provisions expected to subject the Budget Estimate to expert and public scrutiny before the NA considers the Budget Estimate. In doing so the Draft Constitution also requires that “the recommendations shall be taken into account when the committee makes its recommendations to the National Assembly. [248 (5)]”

This means that public scrutiny is provided for at the end of the Budget Cycle, however, public involvement at the beginning of the Budget Process could prove even more beneficial. A provision could be included in 248 stating that;

“At Call Circular stage, Ministries shall consult beneficiaries on project performance of the preceding year, such considerations shall be considered and included in each Ministry’s budget estimate.”

The rationale is that the public’s needs should be considered from the onset and the performance of projects should be assessed by engaging project beneficiaries. Can one provide for a household without engaging members of the household from the onset? Ministries can only assess project impact by engaging project beneficiaries. If this provision is adopted it could eliminate unnecessary spending on projects with minimum impact, freeing up funds for more impactful projects.

In summary the Budget Process has been significantly improved in the Draft Constitution as it encourages more Public Consultation and National Assembly scrutiny. However, there are some areas for improvement which could cut down on unnecessary government spending on projects with minimal impact and by ensuring that a Government shutdown does not ruin the lives of ordinary Gambians who depend on the Government as their biggest employer.