You are at:Home»News»CRC Begins External Consultations in Senegal

By The Gambia’s CRC

The Constitutional Review Commission (CRC) has begun its external public consultations beginning in Senegal on Sunday, 28th April, 2019 at the Hotel De Ville in Dakar.

The consultative process is aimed at eliciting the views and aspirations of Gambians living in the diaspora on the drafting of the new Gambian Constitution and it will cover Africa, Europe, the Middle East and United States of America.

Reacting to CRC external consultations with Gambians in the diaspora, CRC Chairman Justice Cherno Sulayman Jallow said: “The CRC continues to engage all Gambians across all strata of society, both within and outside The Gambia, in accordance with its mandate under the Constitutional Review Commission Act, 2017. We are particularly pleased that the various public consultation platforms that the CRC has established, including the Gambian diaspora public consultation, continue to be well-embraced by Gambians and other stakeholders, all collectively geared towards building an all-inclusive new Constitution for The Gambia.”

In his welcoming remarks, the Gambian Ambassador in Senegal, His Excellency Ebrima Ousmane Ndure, said the Government recognizes the Gambian diaspora as the 8th region of The Gambia and thus seeking their views on this very crucial national process is a worthwhile venture.

He said the diaspora has always played an important role in the development of The Gambia.

‘This is your show. Make your views and opinions known not only for us here today but for the generations of Gambians to come,’ he told the gathering.

Ambassador Ndure said the occasion is an opportunity for all Gambians residing in Senegal to come together under the umbrella of one Gambian association irrespective of their different political affiliations. 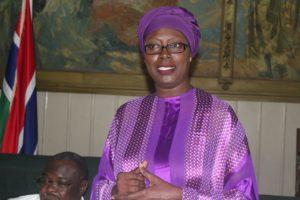 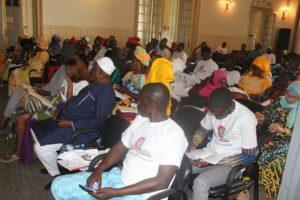 Participants at the event

The Vice Chairperson of the Constitutional Review Commission (CRC), Hawa K. Sisay – Sabally, said the Commission is established by an Act of the National Assembly to review and analyze the current Constitution, draft a new Constitution for the Republic of The Gambia and prepare a report in relation to the new Constitution.

The Vice Chairpersondescribed the event as a “great success”, saying an impressive number of Gambians attended the public consultation.

“It shows that they are keen about what is going on back home and they want to participate in the Constitution making process. They want their voices to be heard and to be provided for in the new constitution” she noted.

She said the level of participation was very high and that indicates the significance Gambians abroad attach to the constitutional building process.

The President of the Association of Gambians in Senegal, Muhammed Saho, said they are satisfied that the Constitutional Review Commission (CRC) values their contribution in national development. He thanked the Commission, on behalf of the Gambian community in Senegal, for soliciting their views in the new Constitution Gambians are making.

“We feel involved and this goes to show that the government recognizes that we are Gambians irrespective of our geographical location”, President Saho added.

Aisha Dabo, a Senegalese-based Gambian, said the CRC’s external consultation shows that the Commission considers Gambians in the diaspora. She said giving Gambians abroad the opportunity to express their opinions on such a significant national engagement is historic and will go far enough in ensuring that the new Constitution reflects the views of the majority.

Dabo said the consultative process is inclusive and suitable enough for everyone to express their views.

A similar meeting will be held in Nouakchott, Mauritania and in Jeddah, Saudi Arabia on Thursday 2nd May, 2019.