By Yusef Taylor and Lama Jallow

Attorney General, Hon. Ababacarr Tambedou’s tabled the motion for a 45 Days extension by citing section 34(5)(a) (i) of the 1997 Constitution. In his submission, the Attorney General urged Parliamentarians to extend the SoPE to empower the Government to continue with its regulations and restrictions on open markets, shopping areas, public transportation, essential commodities, closure and restrictions on non-essential public places, educational services and places of worship.

“The objective for the motion is to protect lives, including the lives of people living in your constituencies,” Hon. Tambedu told Parliament. According to him “the government is aware that the measures which may be imposed as a result of the extension will affect livelihood but is a matter of survival first and not about individual preferences”.

He said several emergency regulations were issued by the president to address these hardships which include essential commodities emergency powers regulations which sought to protect the public from price hikes and ensure adequate food supplies in the country during the period of the emergency.

According to the Justice Minister “to enable the government to continue to provide effective leadership, the government must be given a margin of appreciation in deciding the measures it wishes to adopt” and sufficient time to implement the regulations to curb the virus.

In his view, the 45 days extension requested by the government is the minimum that has been recommended by the Government’s Chief Health Adviser. He acknowledged that more testing is needed and referred lawmakers to the World Health Organization (WHO) who he said reported that nearly a Quarter Billion Africans could be infected which could result in 200,000 deaths. This he said was something they are avoiding the Gambia to fall into.

He emphasised that it is incumbent upon all to do everything they can including sensitizing people about the dangers of this pandemic not just to follow individuals wishes and desired. During Attorney General, Tambedu’s submission to NAMs he highlighted that “the regulations are not been implemented and enforce in large parts,” which was taken as an admission that the implementation for regulations needed improvement. This was not taken lightly by NAMs, some of whom had toured the country assessing the implementation of the SoPE Regulations.

Opposing the motion for the extension of the SoPE, Hon. Madi MK Ceesay member for Serekunda West said the reason advanced is unjustifiable considering the living condition of the people. He argued that there is a total failure on the implementation of the regulations given to the government during the 45 days SoPE extension.

He added we are not going to support any motion for an extension because the government has lapsed in terms of implementing some of the regulations.

Parliamentarians argued that the government’s request for an extension was not justifiable and that the first 45 days SoPE they approved was misused. 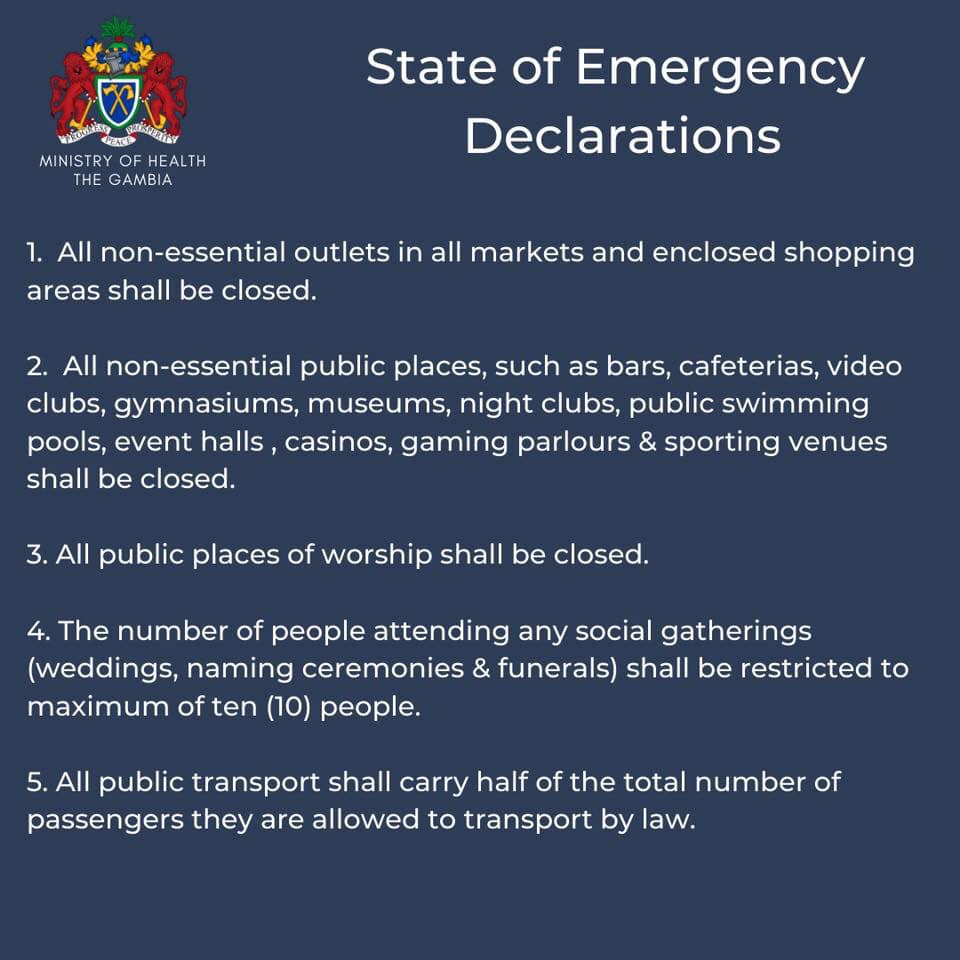 At the end of the debate, the motion was rejected as three-quarters of the National Assembly did not vote for the motion. NAMs from the majority United Democratic Party voted against the motion to extend the SoPE. Some NAMs had expressed to vote in favour of the initial 21 days SoPE Extension recommended by the Committee however, the Speaker declined to revisit the motion.

Many have raised concerns that UDP NAMs shouldn’t have voted against the extension in an attempt to boycott President Adama Barrow’s government. However, some have welcomed the motion claiming that the single casualty combined with the socio-economic impact does not justify an extension of the SoPE.

It is left to be seen if an extension will be granted for a lesser period.