Days before the recently concluded Parliamentary Elections the Centre for Policy, Research and Strategic Studies (CepRass) published a poll predicting that President Adama Barrow’s National People’s Party (NPP) would win sixteen (16) seats while former Vice President Ousainou Darboe’s United Democratic Party (UDP) would win thirteen (13) seats. Considering that the poll results were “inconclusive” on 10 predictions a total of 43 predictions were conclusively made. Comparing the elected members and the prediction it can be seen that 33 out of 43 predictions were accurate which translates to an accuracy rate of 77%.

Below is a table that summarises the CepRass Poll Predictions per party compared to the 2022 Election Results. It can be seen that despite the 10 “inconclusive” constituents the CepRass Polls were quite accurate. Given that the NPP actually won 18 seats instead of the 16 predicted and that the UDP won 14 seats instead of the 15 predicted it shows that the polls were very accurate and that both parties would win most of the seats.

The poll also accurately predicted that the Gambia Democratic Congress (GDC) led by Hon Mama Kandeh would not win any seats after winning 5 seats in 2017. This CepRass Parliamentary Poll accurately predicted that the Peoples Democratic Organisation for Independence and Socialism (PDOIS) would lose two seats with one to be won in Serekunda. However, the prediction that Hon Ousman Sillah of the PDOIS would win in Banjul North proved to be inaccurate as UDP’s Momodou Lamin B Bah defeated the incumbent.

Another bold prediction by the Poll was that an unprecedented 4 Independent Candidates would win. This proved to be inaccurate as Gambians elected 12 Independent Candidates after only electing one Candidate in 2017.  More importantly, it’s worth noting that besides the People’s Progressive Party (PPP) the CepRass Poll accurately predicted that no other Party will win a seat. 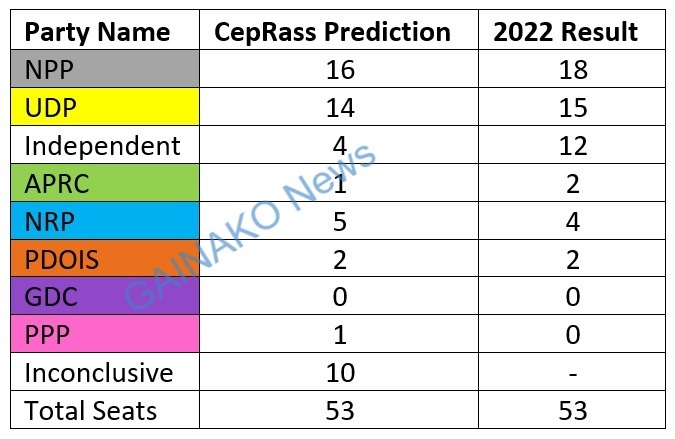 Similar to when the CepRass Presidential Elections Poll predicted an NPP Landslide the Opposition was not convinced about the credibility of the poll. Just a day before the Parliamentary Elections a Standard Newspaper article quoted the GDC Candidate for Jeshwang Constituency, MC Cham Jr rubbishing the CepRass Predictions.

According to MC Cham Jr the “CEPRASS election polls have never been close to the outcome of any election result as in the last mayoral elections, their prediction was the opposite of the final”. Making reference to his campaign observations Mr Cham says he has “visited almost all the compounds in Jeshwang Constituency and no one knows the existence of such polls, so this begs the question how did they arrive at such a false conclusion?”

Although the Poll predicted that GDC would not win any seats the poll failed to accurately predict the winner of Jeshwang Constituency. According to the Poll, a UDP Candidate would win Jeshwang, however, Sheriff S. Sarr from the Alliance for Patriotic Reorientation and Construction (APRC) won Jeshwang.

Below are 33 of the accurate predictions made by CepRass. 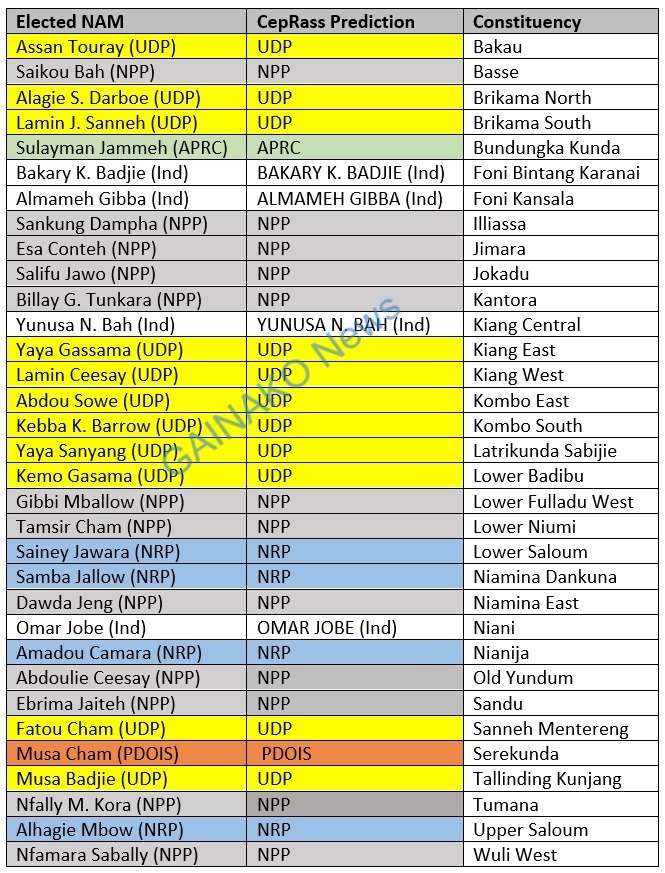 Out of the ten inaccurate predictions, it can be seen that three of them are from Banjul. Some of the surprising predictions which proved inaccurate is that Independent Candidate Hon Fatoumatta Njai would be defeated by an NPP candidate.

Another inaccurate prediction claimed that Hon Suwaibou Touray would lose to an NPP Candidate in Wuli East. Wuli is known as a PDOIS stronghold so, it was a surprise when the CepRass Poll predicted that both Wuli East and Wuli West would fall to NPP Candidates. The CepRass Poll was 50% accurate in Wulli as it accurately predicted the biggest surprise result of the Parliamentary election, Veteran PDOIS Politician Hon Sidia Jatta losing to NPP.

It was also a surprise to see the CepRass Poll predicting that the NPP would win Busumbala which is a UDP stronghold. Although UDP’s preferred Candidate, Momodou Sabally was rejected by the Independent Electoral Commission, Independent Candidate Muhammed Kanteh was declared the winner after enlisting the support of Momodou Sabally. Mr Kanteh was a former Police Commissioner who is affiliated with the UDP.

Below are the 10 inaccurate predictions. 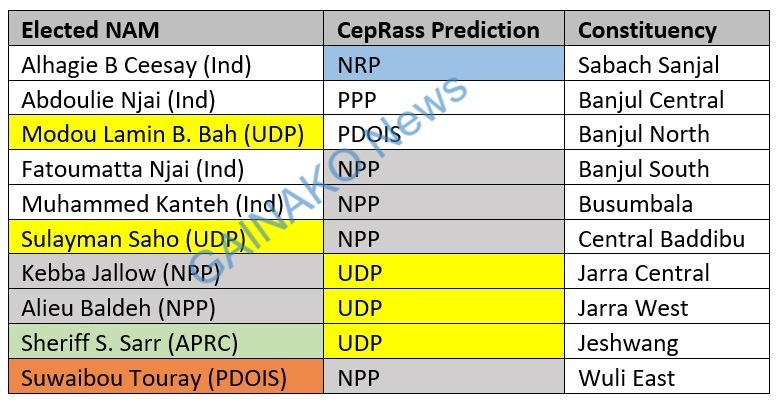