If it is true that ECOWAS has suspended the UN-approved intervention based on the will of the Gambian people to remove Yaya Jammeh out of the State House, then I am completely opposed to the decision. Our Chief Servant Adama Barrow must not endorse such a decision and as the Head of State he must demand that either Yaya Jammeh surrenders himself immediately or all forceful means by applied to capture and remove him from the State House.

ECOWAS must bear in mind that Yaya Jammeh has flouted the constitution and sovereignty of the Gambian people when he rejected the elections of December 1. Following this, ECOWAS leaders spent huge public resources to visit Yaya Jammeh on two occasions on December 13 and January 11 only to send them back empty handed. It was not the case that Jammeh was the one who was unfairly treated or offended but instead it was he who has damaged the law while everyone was seeking to plead with him to respect constitutionality. How therefore can we allow Jammeh to cause the waste of public resources of these leaders and their governments, their people and ECOWAS only to now succumb to him as he wishes?

Since December 9, Jammeh has caused incredible social strife, economic loss and political instability in the Gambia to the point that the elected Chief Servant of the Gambia had to be sworn-in in a foreign country. He has caused the entire world to be on edge and to expend huge resources to deploy military personnel and hardware only for Jammeh to play games with them. There should not be any negotiation with Yaya Jammeh.

Yaya Jammeh deserves no sympathy at this stage because of the huge cost of his unconstitutional behaviour. He must not be allowed to hold hostage the Gambia and the world when in fact he is a criminal. Where have we ever seen a terrorist given the freedom to determine when and how and where he will abandon terrorism? As a citizen, I hereby demand that our Chief Servant Adama Barrow inform ECOWAS that we the people wish to see them enforce our will by going after Yaya Jammeh and arrest him. If he is afraid, then let him surrender now to ECOWAS forces so that they can him over to the Gambia Government.

Yaya Jammeh is a fugitive and we cannot and must not ever allow a fugitive to occupy our State House. Yaya Jammeh does not deserve any rights and privileges of a former president because of the clear willful violations of the constitution and sovereignty of the Gambia. If we honour Yaya Jammeh with the rights and privileges of a former president then we must also honour people like John Hawkins and Governor Sitwell of England who had enslaved and colonized and massacred our forefathers and foremothers during slavery and colonialism. Yaya Jammeh is the Hitler of the Gambia and where the Germans do not honour Hitler we have absolutely no justification and reason to honour Yaya Jammeh. He must surrender now or be captured.

I am opposed to any deal or negotiation with Yaya Jammeh.

Gambians stand up and demand the unconditional surrender or forceful capture of Yaya Jammeh and his accomplices in the APRC and the Gambia Armed Forces. 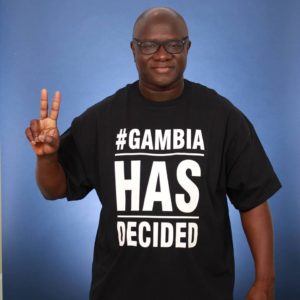