You are at:Home»Human Rights»Why is The Gambia’s 2019 Universal Periodic Review Report so evasive?

The Universal Periodic Review (UPR) is a process which involves periodic review of the human rights records of all 193 UN Member states. According to the United Nations Human Rights Council Database The Gambia has only submitted three Periodic Cycle Reviews, first in 2010 and again in 2014. The third and most recent cycle is from 2015 to 2019. The Gambia’s 2019 Universal report can be accessed here.

I first got hold of The Gambia’s 2019 UPR report today, and started going through the area I had the most interest in, which happened to be “Freedom of Opinion and Expression”. The first thing any reader will notice is that the document does not include the actual recommendations that the Government is responding to. This makes it very difficult to follow.

Let’s take a look at the first recommendation on Freedom of Opinion and Expression as shown below in the Gambia’s UPR 2019 Report. 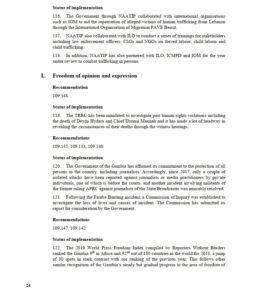 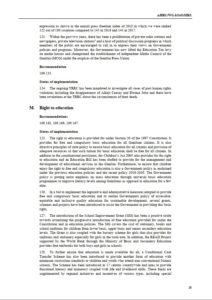 For example, recommendation 109.148 requests that The Gambia Government “Demonstrate its commitment to freedom of expression, including by members of the press, by allowing the UN unfettered access to complete its investigation of the death of journalist Deyda Hydara in 2004 and the disappearance of journalist Ebrima Manneh in 2006.”

This recommendation is accompanied with a response submitted in 2014 “Rejected, there cannot be unfettered access anywhere.” This was the tone of the previous government who’s responses are published in “A/HRC/28/6/Add.1”. The current Government has now responded in a positive tone, albeit indicating that the Truth Reconciliation and Reparations Commission (TRRC) is already conducting investigations on the deaths of Ebrima Manneh and Deyda Hydara, suggesting that the UN need not duplicate their efforts.

This makes the Gambia’s UPR 2019 Report very evasive and not easy to follow. Is this intentional or is this standard practice, I begun to wonder, as previous UPR reports were not done in this manner? This confusion could have been easily avoided if all the recommendations were included in the report and the new Government could then comment on how they will implement the recommendations differently from a Government who was previously un-willing to grant UN investigators “unfettered access anywhere”. At least the recommendation should have been included in the report’s annexes.

As soon as one goes through the time consuming task of joining the recommendations, The Government’s 2014 responses and the current Government’s 2019 responses under “status of implementation”, the document begins to make more sense allowing readers to assess if the Government’s response is sufficient and the change of tone from the previous Government.

In this case both the recommendations and the responses are available but in two different documents which can be seen below. 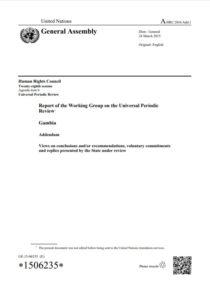 “109.148. Demonstrate its commitment to freedom of expression, including by members of the press, by allowing the UN unfettered access to complete its investigation of the death of journalist Deyda Hydara in 2004 and the disappearance of journalist Ebrima Manneh in 2006.

“109.145. Fully protect and promote freedom of expression, association and peaceful assembly for all, without fear of arbitrary detention, intimidation or harassment, and to investigate all allegations, of torture or ill-treatment and hold the perpetrators to account.

109.133. Ensure independent, effective ad speedy investigation to violations of the right to freedom of expression committed by officials engaged in law enforcement duties, to hold those responsible to account; and provide redress to victims.

109.140. Promote and guarantee freedom of expression in compliance with international standards as recommended previously.

Recommendations on Freedom of the Press and Expression

“109.147 Take all the necessary measures to ensure that all persons, including journalists, opposition leaders and political opponents and human rights defenders can freely exercise their rights to freedom of expression, association and peaceful assembly without fear of arrest, detention, intimidation or harassment.

109.142 Create and maintain in law and in practice, a safe and enabling environment, in which rights defenders can operate free from hindrance and insecurity, in accordance with Human Rights Council Resolution 22/6. 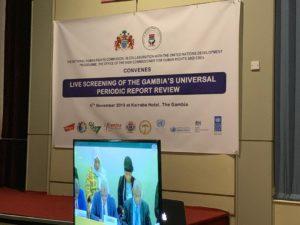 The good news is that the report has a different tone to the 2014 report by the previous Government. It is less defensive and uses the TRRC as cover for not investigating the deaths of Chief Ebrima Manneh, Deyda Hydara, Alhaji Cessay and Eboue Jobe.

Another positive from the report is that it does not ignore the Faraba Bantang incident, however, the Faraba Bantang commission report is still not public, during the screening event organised by the National Human Rights Commission, a representative from Civil Society Organisation, Article 19, called on the Government to publish and publicize the Faraba Bantang Commission Report. Article 19 also highlighted the arrest and detention of 37 youths in the notoriously overcrowded Mile 2 Central Prison. 30 of those arrested were eventually released after 14 days without any case to answer.

Some notable human rights violations which were omitted in the report include;

With regards to the Government’s commitment to creating “a safe and enabling environment, in which rights defenders can operate free from hindrance and insecurity, in accordance with Human Rights Council Resolution 22/6″ the current Government has clearly changed it tone and lists numerous efforts and its progress in the 2019 World Press Freedom Index and lifting the Education Tax Levy.

While these are all commendable efforts by the Government, there is still more work to be done beginning with making sure the next Universal Periodic Review Report is more comprehensive and less evasive. This underlines the Government’s weakness in implementing it’s own National Development Plan objective of E-Governance which is to reform The Gambia into “a Digital Nation and creating a modern information society”.

Yet still the burning issue around freedom of assembly and expression have not been dealt with such as Civil Society’s demands for Government to repeal draconian sections of the Public Order Act criminalizes and punishes protests without permits.

Gambian Security officers have recently been trained by French security officers on riot control and have been showing off some brand new riot gear and water cannons. As December looms the imminent standoff between the Security apparatus and determined protesters will paint a true picture of how the Government is dealing with dissenting voices. Will they be crushed like the April 2000 Students or the Faraba Bantang riots? Only time will tell.