Yesterday the Independent Electoral Commission (IEC) issued a press release postponing the General Registration of Voters indefinitely on 4th January 2021 drawing condemnation from the public and the United Democratic Party (UDP). Today morning, 5th January 2021, news that Mr Remi Joiner had been appointed as the IEC’s Deputy Chair was being circulated on Social Media. By afternoon the UDP had issued a statement condemning both the postponement and Mr Joiner’s appointment as IEC Deputy Chair.

According to the UDP presser signed by Party Leader Ousainou Darboe, Mr Joiner is a member of President Barrow’s National People Party (NPP) and the IEC had enough time to prepare for the General Registration of Voters. To find out more from the IEC on the reasons for the postponement I visited their office in Kanifing Layout, opposite National Nutritional Agency, where I spoke to the Chief Executive Officer, Sambujang Drammeh.

Mr Drammeh declined to grant me an interview and remained tight-lipped on the IEC’s reasons for postponing the General Voters Registration which was set to commence on 14th January 2021. With barely a week to go the presser failed to indicate a new date, instead stating that “the new date for the voter registration will be announced in due course”.

I asked Mr Drammeh if there was any truth in rumours that the IEC is facing financial constraints which have impacted on equipment and logistics but he declined to comment. In reaction, I informed Mr Drammeh that the public has raised concerns that the presser contained insufficient information to which he responded that he would not be able to comment on the reasons for the postponement.

In response to my request for further information, Mr Drammeh said that the IEC’s presser is all he could go by at the moment and that a new date will be communicated as soon as the logistical challenges have been ironed out. 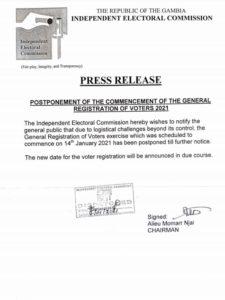 I asked Mr Drammeh if the IEC would hold a press conference on the matter anytime soon and he questioned the need for a press conference on the issue. I highlighted that a number of issues need to be addressed especially the tenure of the IEC Chairperson, Mr Alieu Momarr Njai. I explained that Political Party leaders have questioned the IEC Chairperson’s tenure and called for him to clear the air as soon as possible.

As expected, Mr Drammeh declined to comment and instead shared the IEC presser seen above, after which I left his office only to receive another press release from the UDP on the same issue this afternoon. 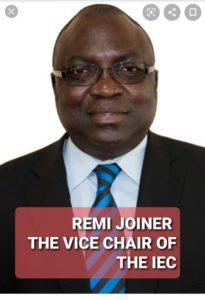 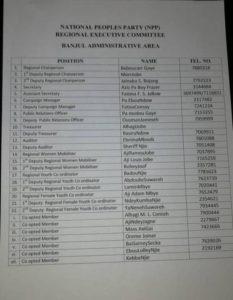 Just before publishing this article, the UDP issued a presser condemning the IEC’s indefinite postponement demanding “that the IEC provides clear and justifiable bases to all political parties and the general public the reasons for the postponement of the voter registration process”.

“UDP is aware that that IEC had enough time to prepare for this process more than a year ago. Coming up with a notice that indicates “……. due to logistical challenges beyond our control…..” is totally unacceptable.
The Elections are a matter of public interest and any logistical challenges must be communicated to the general public in full details.”

Another condemnation from the UDP was fired on the Executive’s decision to appoint Mr Remi Joiner as the Deputy Chair of the IEC. The  UDP claims that Mr Joiner is an Executive Member of President Adama Barrow’s NPP, Banjul Regional Branch.

Their presser claims that “the illegality of this appointment” is a “violation of and contravention of Section 42 (5) (c) of the 1997 Constitution of The Gambia”.

The presser signed by Party Leader Ousainou Darboe ends by calling “on all patriotic Gambians to condemn these acts of illegitimacy and demands the IEC further explains the reasons for such unprofessional and unconstitutional actions being taken when we have only months to go to the Presidential elections of The Gambia.”