You are at:Home»Business Economy»TRRC’s Dunes Hotel: Stolen by Jammeh and used for NIA operations

What are the chances that the very premises which now serves as the center for The Gambia’s Truth Commission into human rights violations during former President Yahya Jammeh’s 22 year rule was actually stolen by the same man and used by the National Intelligence Agency (NIA)? A Janneh Commission Report details how Jammeh fraudulently used a bank account owned by the Gambia National Petroleum Company (GNPC) to purchase Dunes Hotel Resort back in 2014. According to the Janneh Commission “investigations have revealed that the property was used by the NIA for their operations”.

Just last week the Justice Minister, Hon. Ababacarr Tambedu announced to the Media that D50 Million Gambian Dalasis (GMD) were seized from Jammeh’s assets and paid into the Victims Trust fund to compensate victims. Highlighting the scale of Jammeh’s acquired assets, Hon Tambedu explains that “we continue to sell the assets of former President Jammeh as the [Janneh] Commission recommended. That is not going to happen quickly, it’s going to happen over time. Former president Jammeh has a lot of assets. I think he has 281 properties.”

Back in 1994 before Jammeh and the Armed Forces Provisional Council took over State House, Jammeh had no assets to his name. Fast forward 22 years and he has now amassed Islands, Reserved Wetlands, Parks and private properties. The Commission report states that besides using public funds to purchase properties, Jammeh stole at least 29 properties. “The Ex-President was in possession of 29 properties which were not acquired from the State or any district authority, nor were they acquired by purchase”.

In a section detailing source of funds to purchase the properties mentioned above, the Janneh Commission highlights that “the Ex-President’s legitimate earnings are insufficient to acquire properties worth D195,000,000 and £1,150,000 & $150,000”.

According to findings detailed in Volume 3 of the Janneh Commission report, which focuses on special landed properties acquired during Jammeh’s 22 year rule, Susan Waffa Ogoo acted as a witness while then President Jammeh signed the deed worth over D32.5 Million GMD. In total Jammeh paid $650,000 United States Dollars from GNPC’s Skye Bank Account and renegade on an agreement to pay the outstanding amount of $97,000 USD due for Capital Gains Tax. This amounts to D37.4 Million Gambian Dalasis, going by a rate of D50 Gambian Dalasis to One United States Dollar.

The report details that Dunes Hotel and Resort was previously owned by David Ford and since the illegal purchase and deed transfer was effected with GNPC’s funds the commission recommends that the country’s Petroleum Corporation should retain property rights over Dunes Hotel. The Janneh Commission also recommends that “Dunes Hotel shall be forfeited and sold and the proceeds of sale applied to any debt owned by GNPC to Central Bank of the Gambia”. Finally it concludes that “if no liability is outstanding, the sum of $650,000 USD shall be repaid to GNPC.” Outstanding sums shall be paid to the Consolidated Revenue Fund. 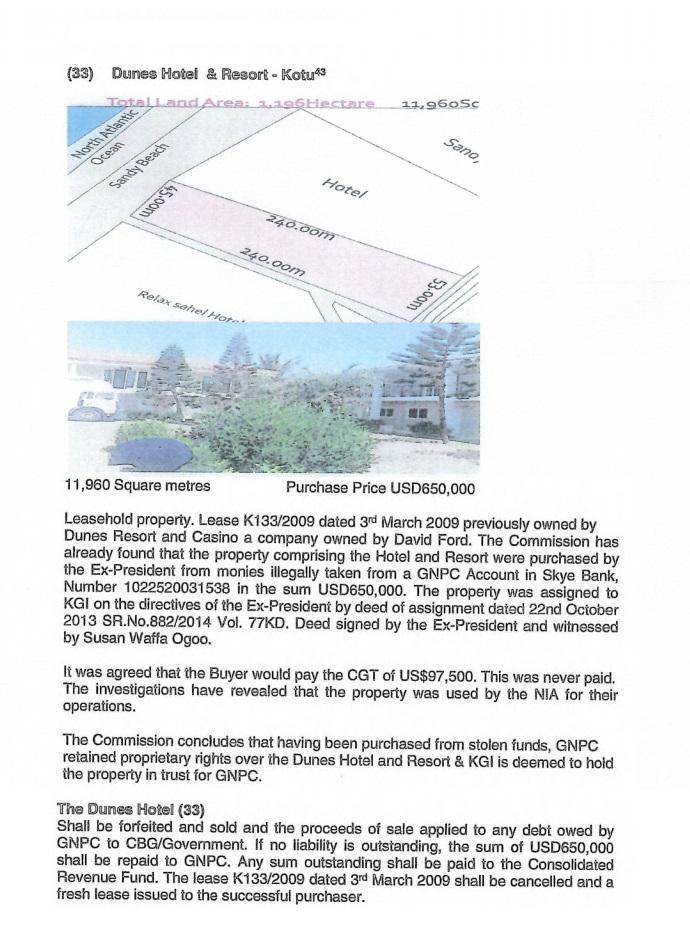