The Gambia is currently under a “State of Emergency” and facing a political impasse as rebel leader Yahya Jammeh refuses to give way to newly sworn-in President, Adama Barrow. In a country where civilians are usually arrested and abducted for dissent, a “State of Emergency” is the perfect cover to detain anybody without consequences. A significant number of civilians have been arrested temporarily for wearing the hugely popular #GambiaHasDecided T-Shirts.

The #GambiaHasDecided movement rose to prominence after December 1st, 2016 Presidential elections won by then Opposition Coalition candidate, Adama Barrow. Since last week soldiers have been arrested for allegedly showing support to the newly inaugurated President who took his oath of office in Dakar, Senegal on Thursday, 19th January 2017. This week three civilians have been arrested including one Gambian woman, Monica Njie based in Birmingham. Two young men, resident in the small West African state have also been arrested, namely ‘Logou Man’ and Tijan Barrow. The recent wave of civilian arrest comes hot on the heels of Yahya Jammeh’s recent pronouncement of amnesty until January 31st, 2017.

Monica Njie, host of “Every Woman’s Show” on Kibaroo Radio

According to Monica Njie’s family, she traveled to The Gambia from the United Kingdom on January 10th and is scheduled to travel back to the UK on January 24th, 2017. She was arrested on Wednesday, January 18th, 2017 around 11 O’clock in the morning and has since been missing for over 24 hours. Monica traveled to the capital city, Banjul where she witnessed the chaotic scenes of people rushing to evacuate the country via the ferry. However, when she started taking pictures of the mass exodus unfolding she was quickly arrested by unidentified security officials. Her family members are now concerned for her well being as they do not know where she is being detained. It’s still not clear if she was arrested by Police Officers, National Intelligence Agents, or Military Personnel.

Monica is survived by her two daughters and partner who are all concerned for her safety in The Gambia. Given the current “State of Emergency,” they do not know who to turn to as they try their best to facilitate her release. According to family members, she tried to ring one of them without any response but managed to contact her driver who reported her arrest to her family. Monica a 43-year-old woman was wearing a black dress, black shoes, and a black bag on the day of her abduction. Gambians in the UK are hereby urged to call their Embassy and the Birmingham MP to request for her quick release so she may return home by the 24th of January 2017. 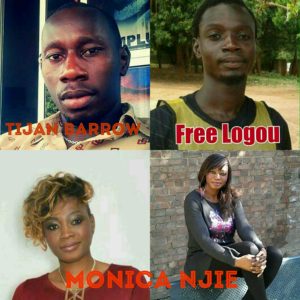 Unfortunately, contact with Logou Man and Tijan Barrow’s loved ones could not be established prior to this article being published. However, rapper-activist Jerreh “Retsam” Badgie posted this message on his Facebook page to alert the world of his friend’s arrest. Retsam and friends are currently assisting Gambian’s seeking refugee in Senegal. A build up of Gambian refugees has emerged across the Senegambian border as thousands flee The Gambia in an attempt to escape the imminent military intervention of ECOWAS forces, determined to flush out rebel leader Yahya Jammeh. Raptivist, Retsam, and Killa Ace have been advocating for the release of Gambians like Lamin Sey, since they fled The Gambia and seeking refuge in Dakar Senegal. Their efforts for freedom from dictatorship intensified after the April 2016 uprising which saw the torture and death of two Political Activist including Solo Sendeng.

Here is Retsam’s Facebook Post. “So a brother Logou Man someone I really got esteem for, and the whole of pipeline got arrested yesterday with Tijan Barrow and colleagues at their workshop for printing #GambiaHasDecided t-shirts. In the dying moments of Yaya Jammeh’s rule, something like this happening is so unacceptable having agents going around arresting people and taking them to undisclosed locations should be resisted. I mentioned this before, be your brother’s keeper, you can’t stand and watch these buffoons take our brothers for the sake of pleasing one man and without any violation of the law. As long as these things are happening consider The Gambia as an oppressed Nation and still under Jammeh rule. We are yet to be free we are yet to celebrate until all abducted and illegally jailed people are set free. Aluta Continua.”

Lamin Sey who was arrested in April 2016 also posted this on social media “Information just reached us that this dude by the name Sheikh Tijan Barrow who owns a printing business workshop at pipeline has been arrested by the stupid NIA’s for printing the Gambia has decided t. shirts together with his entire team. Free the brother for God sake.”

According to the Gambian Constitution Section 36, Subsection 1 (a) – Persons detained under emergency powers “shall, as soon as reasonably practicable, and in any case not later than twenty four hours after the commencement of the detention, be furnished with a statement in writing specifying in detail the grounds upon which he or she is detained”.

Family members of the detained are also granted access rights and to be informed of their loved one’s detention within Section 36 of the constitution, failure to abide by the constitutional provisions mentioned herein turns an individual’s arrest into an illegal abduction. Section 36, Subsection 1 (b) guarantees that family members of “the spouse, parent, child or other available next-of-kin of the person detained shall be informed by the authority effecting the detention and shall be permitted access to the person concerned at the earliest practicable opportunity, and in any case not later than twenty-four hours after the commencement of the detention”

However, the current situation is very tense in The Gambia as ECOWAS forces are on the verge of intervening militarily to enforce the will of the Gambian people who voted for Adama Barrow in December 2016. This has made family members and most Gambians very tentative to leave their homes. Yahya Jammeh and his surrogates have now been branded rebels after refusing to vacate the country’s State House because their mandate expired after midnight of Wednesday, January 18th, 2017.