The International Republican Institute (IRI) organised a half day workshop with stakeholders on Land and Natural Resources provisions in the Draft Constitution. The forum was moderated by Ministry of Petroleum & Energy Advisor, Momodou Sarr and attended by the National Assembly member for Wulli East, Hon. Suwaibou Touray, Officials from the Ministry of Petroleum, Geology Department, members of Civil Society and Media practitioners.

The workshop held on Tuesday, 14th January 2020 at IRI’s residence in Cape Point, commenced with a brief presentation on the Constitution provisions on the Right to clean environment (Provision 59), Principles of land, environment and natural resources policy (252), the land Commission (253 – 256), Land ownership by citizens (257) and ownership of land by non Gambians (258). The Draft Constitution can be accessed in the link online.

Provision 59 “Right to clean environment” is fundamental. It states that “Every person has the right to a clean and healthy environment, which includes the right- (a) to have the environment protected for the benefit of present and future generations through legislative and other measures, particularly those contemplated in Chapter XIV, and (b) to have obligations relating to the environment fulfilled under Chapter XIV.”

During his presentation, Mr Sarr stressed that the most important provision in the Draft Constitution is the protection of genetic resources and biological diversity. He explained that this had to do with living organisms and plants which are necessary for a healthy environment and human survival. 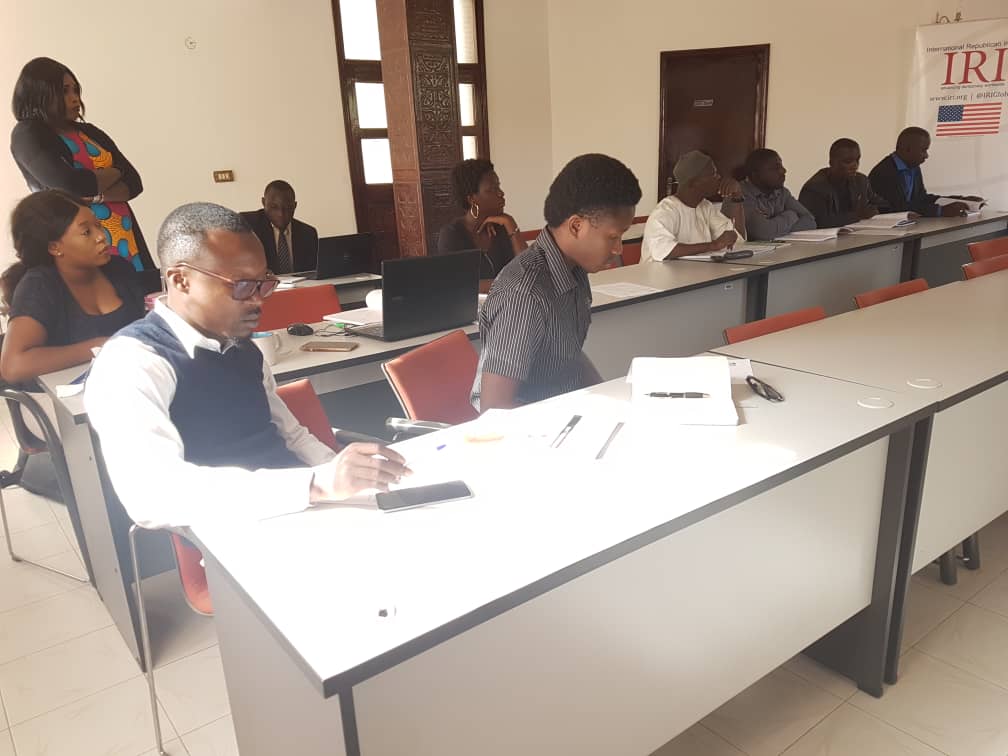 Cross Section of Delegates at Workshop

Participants recommended that provision 252 (1) k should be amended to include tribe. 252 (1) k “elimination of discrimination in law, customs and practices related to land and property in land based on gender and tribe”. One participant noted a particular incident in which some decades resident locals who had settled in remote areas were asked to evacuate their land by another tribe who claimed ownership of the land in question.

One participant highlighted that equitable distribution can be very subjective as stated in provision 252 (1) “Land, environment and natural resources in The Gambia shall be held, used and managed in a manner that is equitable, efficient, productive and sustainable, and in accordance with the following principles”. However, supporting acts promoting Corporate Social Responsibility are very important in effecting equitable distribution.

One participant raised a query that a provision should be included which mandates for a share of proceeds raised from resources exploited in a certain community to be reinvested in that particular community. In response the Assistant Director from the Ministry of Geology, Mr Alieu Jawo explained that although the constitution does not include such specific provisions an act of the National Assembly provides for 20% of resources exploited from a certain community to be reinvested.

One participant highlighted provision 254 which outline of the “Powers and functions of the Commission”. However, it was observed that the new act should not just only provide for advisory roles but address land use and natural resource preservation by actively promoting the protection and conservation of land and the Gambian Environment.

In this regard, Hon. Suwaibou Touray highlighted that the Draft Constitution did not include any legal provisions for implementation of land recommendations and land management. In other words the land Commission did not have the appropriate teeth to bite. Generally all participants noted that the provisions are a marked improvement to the lack of provisions promoting equitable resource use and management. However, are noted there remains some room for improvement.