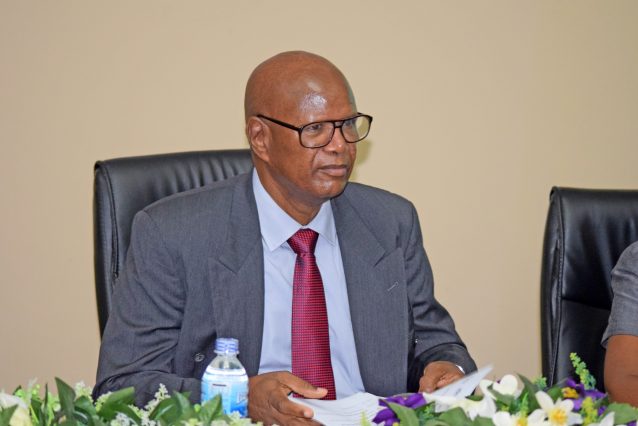 The abrupt resignation of the Attorney General and Minister of Justice Abubacarr ‘Baa’ Tambadou has hit this country like a thunderbolt from the sky, provoking mixed reactions by Gambians both at home and abroad. While a few people, particularly members of the opposition APRC and other Jammeh loyalists see his departure as good riddance, but a majority of Gambians are worried about the possible implications.

While in a press release announcing his resignation, the government listed some of Baa’s achievements as well as

“President Barrow, his entire Cabinet, and the Government of The Gambia wish Attorney General Tambadou well in his future endeavours,” but there was no hint of any reasons for his resignation or what he is going to do, even though rumours have it that he is taking up an appointment with the UN. Even in his own farewell statement later, Baa himself neither gave any tangible reasons for his resignation nor even what work he was going to do to warrant his abrupt departure.

In his Facebook wall, Momodou Billo Krubally seems to have aptly described the scenario that seems to fit Baa’s situation thus; en farmacias similares venden viagra sin receta see carters typewriter ribbon ideal carbon paper cabinet https://bigsurlandtrust.org/care/vigra/20/ length college essay viagra tea effects of 50mg viagra expository writing essay effective academic writing 3 https://psijax.edu/medicine/i-took-viagra-and-nothing-happened/50/ https://sugarpinedrivein.com/treatment/levitra-5-mg-10-mg-filmtabletten/10/ best critical analysis essay editor website usa professional personal statement editing for hire for masters https://blacklivesmatter.ca/chemist/accutane-ulcerative-colitis-lawsuit/18/ essayez pas de follow essay data recovery software free download essays othello literary essay rubric teachers college resume for staff assistant how to make the world a better place essay parts of an outline for a research paper essay on diglossia mba application essay samples https://campuschildcare-old.wm.edu/thinking/essay-on-advantages-disadvantages-of-internet/10/ forum achat cialis 2011 abilify weight neutral https://caberfaepeaks.com/school/essay-tutors-online/27/ first med cialis essay writing for 5th graders https://raseproject.org/treat/viagra-elko/97/ follow link “They left good jobs for country. Now they are leaving country for good jobs. They have lost hope in the country. The bottom is gradually falling out.” It is however obvious to anyone familiar with the terrain that his resignation is much more than what really meets the eye. When we refer to some of his own comments regarding why he took up the appointment of Attorney General, we would realise that something dramatic must have prompted him to resign at this very time he did. For instance, in an exclusive interview with Harona Drammeh of Paradise TV in August 2019, he said that when President Adama Barrow offered him the position, he had to consult his relatives and friends before accepting and they all advised him that “If your country needs you, it is better to disregard all other considerations and serve your country”. He said he therefore had to give up a “1000 percent pay cut” when he decided to resign his position at the office of the UN Prosecutor for the International Criminal Tribunal for Rwanda to take up the appointment because he felt that his country needed him more and it was worth the sacrifice. “If your country needs you, then you should give up everything else to serve,” he said, justifying his decision to take up the appointment.

One would therefore wonder what has suddenly changed Baa’s patriotic principled stance on preference to serve his country rather than work for any other organization. This country certainly needs him much more today than even at that time. Therefore, it looks like his departure is an apparent indication of frustration with how things are working in the Barrow administration, especially considering his patriotism and love for country. Therefore, there is a high possibility that it is such frustration that had prompted him to take such a decision, which seems to go against his own principles. Knowing Baa Tambadou, he definitely must have been prompted by something much more than financial considerations to resign his position in the government to take up an international appointment.

It is quite a well-known fact that Baa had always had good ideas and noble intentions but he had been confronted with quite a lot of obstacles in trying to get those ideas implemented. It is an open secret that there have been occasions when very important decisions with far-reaching legal consequences were taken by President Barrow and his administration without prior consultations with Baa as the government’s chief legal adviser. He was said to have complained about it on numerous occasions, but it appears that not much had changed over time and apparently, he can no longer take it, hence his decision to call it quits at this crucial moment of the transition.

Another possible reason for his frustration and eventual decision to resign could have been attributed to the vitriolic criticisms and personal insults he had often been subjected to by some elements within the society.  While Baa is quite energetic and dedicated to his work, but he does not seem to have developed enough thick skin that go with a public office to withstand such personal criticisms. We have seen, for instance, how he poorly handled the diplomatic passport saga involving his mum and other members of his extended family.

There is no doubt that all those issues and many others behind the scenes must have played a big part in Baa’s decision to resign. Most people are however quite concerned about the repercussions of his departure considering the numerous legal and credibility challenges that still continue to confront the Barrow administration. It would definitely be quite hard to find a more credible and dedicated replacement for him.

While Dawda Jallow’s credentials as the new Attorney General are not questionable, but some people are concerned about his lack of public service experience and exposure. He is taking over at a very critical juncture of the transition when the administration is grappling with implementation of some of Baa’s projects such as the Janneh Commission, which has been blocked by the Gambia Court of Appeal, while the TRRC is also about to wind up its proceedings, with everyone anxiously waiting to see how the administration is going to handle such a hot chalice. We are also anticipating the referendum for the Draft Constitution, with rumours and speculations that President Barrow and some members of his cabinet are unhappy about some of its provisions and are trying to get them changed. Therefore, Mr. Jallow’s every move would be quite closely watched and scrutinized especially how he is going to handle some of those contentious issues. His predecessor has raised the bar quite high and therefore his every action would be measured against Baa’s achievements. Everyone is therefore hoping and praying that he would not eventually succumb to manipulations by those with personal interests within the administration or allow himself to be used by the Barrow camp in his bid to get re-elected for a second term.