The Deal We Know?

An Australian company, FAR Ltd, announced in late August that they will commence oil exploration offshore The Gambia’s coast in early quarter four 2018, however, Gambian authorities are yet to make a public announcement. Exploration precedes oil exploitation as it will confirm the quantity of oil off The Gambia’s coast. However, this key stage requires transparency and trust to avoid the country’s natural resources being undervalued for cooperate interest.

The Gambia’s oil blocks dubbed Samo, consist of six oil blocks on the Atlantic coast right next to Senegal’s SNE oil wells. On 22nd August FAR Ltd issued a press release announcing that “the Samo-1 well is planned to spud in early Q4 2018 and is expected to take approximately 40 days to drill on a trouble-free basis.” A week later another announcement from FAR Ltd highlighted that the Government has approved FAR Gambia Ltd’s farmout agreement of a 40% interest in petroleum licenses for offshore Samo blocks A2 and A5 to Petronas. The farm-out agreement means that the Malaysian oil company, Petronas will fund 80% of the exploration costs capped to US$45 Million. FAR will retain 40% of its original 80% working interest. FAR Ltd has created a local subsidiary company, FAR Gambia Ltd which currently employs about 5 operatives. 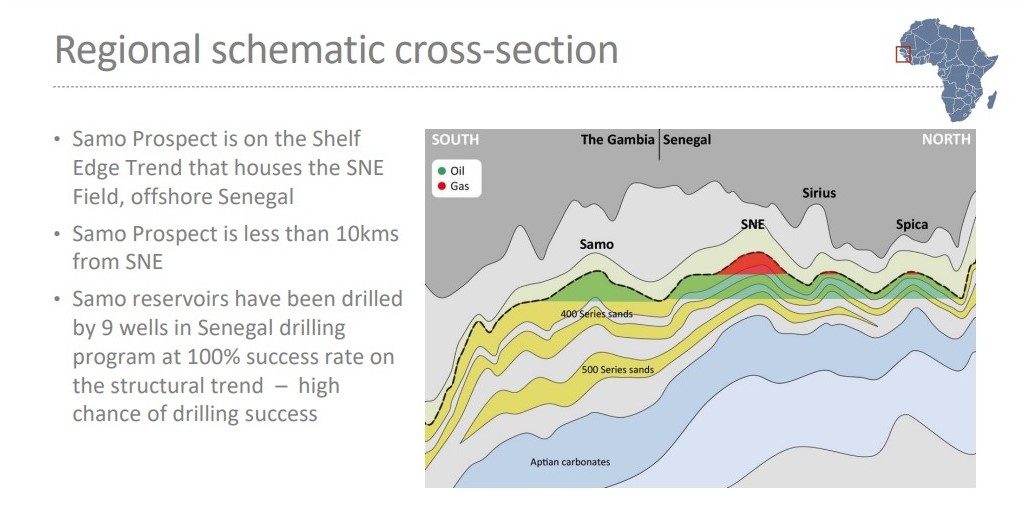 The Samo-1 oil well shown on the map is over 1,017m below sea level and approximately one hundred kilometers offshore. It is in very close proximity to Senegal’s SNE oil well as shown by the schematic and the plan. A PowerPoint presentation prepared by FAR Ltd shows a “Regional schematic cross-section” which according to them demonstrates that “the Samo Prospect has two main targets; an upper reservoir interval which contained liquid-rich gas at SNE and a lower reservoir interval which was oil-bearing at SNE.”

Observing the schematic [which must be seen as a representation]depicts the concept that the oil highlighted in green automatically stops where the Samo and SNE valleys meet. It’s more likely that the green shade, representing oil continues well below the point which the valleys meet raising the possibility that both oil wells are connected and thereby have a combined “Senegambian oil reserve”. Senegal recently launched its national dialogue on oil and gas and announced plans for oil exploitation in 2021. If oil wells in Senegal begin full operation then The Gambia’s total oil potential reserves could decline.

In an interview last year with Offshore Energy Today.Com FAR directors revealed that “the two [A2 and A5] prospects have a combined best estimate Prospective Resource of 1.1 billion barrels on a gross unrisked basis (926 million barrels net to Far).” However, after a more detailed 3-D seismic survey a follow-up announcement highlighted that “the two target reservoir intervals are assessed to have a combined Prospective Resource of 825 mmbbls of oil” about 100 million barrels less than the initial announcement.

Transparency out the Window

Given the wide reporting on the Gambia’s oil exploration deal outside the country, the time has arrived for The Government to disclose the full details of the agreement and outline what the country stands to gain from it. The deafening silence from the authorities is in sharp contrast with how oil exploration is progressing across the border. To engage the public Senegalese President Macky Sall, opened a national dialogue on the management of oil and gas in June this year and contract agreements have been made available for public scrutiny.

According to APA News, a government press release was issued inviting “all stakeholders in the nation to the national consultation on the management of revenue from exploitation of oil and gas”. The release also states that the Senegalese Government intends to seek parliamentary approval stressing that “the conclusions of this consultation will be the subject of a draft law on orientation regarding the distribution of the revenues resulting from the exploitation of oil and gas, a bill for which will be submitted to the National Assembly”. This will allow stakeholders to engage the government during the national dialogue and via the National Assembly.

In contrast to The Gambia, last year former British Premier, Tony Blair visited The Gambia and held closed-door meetings with newly elected President Barrow. In February 2018, Mr Blair’s partner, Cherie Blair represented The Gambia in a legal case against African Petroleum Company which was holding on to two blocks A1 and A4 in The Gambia. In a follow-up public event in May, Tony Blair invited President Barrow to London’s Chatham House where they both remained tight-lipped on oil exploration in The Gambia.

If the authorities silence on this issue raises a cause for concern then the alarm bells must be ringing given the blatant conflict of interest overshadowing the FAR agreement. Lawyer Amie Bensouda is the legal representative of FAR Ltd and also a lead counsel for the Janneh Commission of Inquiry tasked with investigating the financial excesses of previous Dictator Yahya Jammeh’s regime. On the governments side their legal representatives negotiating the FAR contract is Berwin and Leighton however, Amie Bensouda associates also advices the Government on Model License for Blocks 1,3,4 and 6 together with Berwin and Leighton. This is a clear conflict of interest and gives Amie Bensouda a unique advantage during oil and gas contract negotiations as she has a working relationship with the government, Berwin and Leighton and also a representative of FAR Ltd.

Another cause for concern is the interference of FAR Ltd and Erin Energy in Gambia’s recent KMC Mayoral elections. In many countries with evolved electoral laws, external interference is not permitted in any local elections. This is highlighted in the United States Mueller probe of Russian Interference in the 2016 Presidential Elections. Current KMC Mayor, Talib Ahmed Bensouda had a cover photo [seen above]posted on his GamSense Facebook page, promoting his flagship local project supported by international oil companies FAR Ltd and Erin Energy. Mayor Bensouda is the son of Amie Bensouda and boldly announced on their GamSense page that “the agreement to begin the $12,000 [school rehabilitation]project was signed by Talib Bensouda and Far Limited.” This should be a cause for concern for anybody interested in free and fair Gambian elections.

Can the Barrow administration emulate the transparency being exhibited next door by making the contracts public and engaging the general public on how best to manage the country’s natural resources? Can National Assembly members exercise oversight and ensure that Gambia’s interest is being protected? How will the environment be protected? How will the government monitor the oil exploration project? Will there be independent studies or will The Gambia just take information submitted on the “total oil reserve” in good faith? Certainly, there are more questions than answers around the oil deal. It must be clearly stated that all Government key players have a responsibility to engage The Gambian public, however, its very clear that more information is available from international companies not under The Gambian taxpayers’ payroll.