The Gambia’s Ministry of Justice (MoJ) issued a list of ninety (90) adversely mentioned persons to Gainako Online News whom they plan to pursue prosecutions, suspensions, termination of service, voluntary retirement and banning for their role in human rights violations orchestrated during the 22 years of dictatorship under former President Yahya Jammeh.

After Jammeh lost elections to current President Adama Barrow in December 2016, a Truth Reparations and Reconciliation Commission (TRRC) was enacted in 2017 to investigate the human rights violations that occurred from 1994 to 2016. After the TRRC Report and Recommendations were submitted to the President in November 2021 the Government published a White Paper outlining how it would implement the TRRC Recommendations in May 2022.

Speaking to the press on the day of the launch Minister of Justice Hon Dawda Jallow revealed: “that certain individuals who have been adversely mentioned by the Commission continue to serve in various areas of the public and security services”. He added that “the Government shall take steps for their immediate suspension from service while we work on a lawful means to effect their dismissal, termination or compulsory retirement as each case may require”.

The Minister’s bold statement was well received by victims, Civil Society Actors and supporters of the Transitional Justice process. In response to this, a journalist requested to know how many people will be affected by this action. Hon Dawda Jallow explained that the statistics are not readily available however, their Office “will compute that immediately”.

Our reporter contacted the MoJ to request for the list of adversely mentioned persons identified for suspension, dismissal, voluntary retirement, prosecution and banning and received a list of 90 adversely mentioned persons. A Legal Counsel from the MoJ’s Office sent our medium this list which includes persons currently working in the Government and others not currently in public service.

The list of adversely mentioned persons includes three former Executive Members in Harry Sambou, Samsideen Sarr and former Vice President Isatou Njie Saidy for her role in the killing of some 14 students and a Red Cross Volunteer during the April 2000 students demonstration. Quack Doctor Tamsir Mbow who implemented former President Jammeh’s Alternative Treatment Programme is also recommended for prosecution and his license revoked. Dr Mbow fraudulently claimed to treat patients suffering from HIV/ Aids and stopped them from taking conventional treatment thereby resulting in their death.

Also included in the list are some 42 soldiers from the Gambia Armed Forces including members of President Jammeh’s private hit squad named the Junglers, 9 Officers from the Gambia Police Force and 17 Security Agents from the National Intelligence Agency that reported directly to the President. For their role in torturing prisoners at the infamous Mile 2 Prison referred to as President Jammeh’s Five Star Hotel, some five Officers of the Gambia Prison Services have been recommended for prosecution.

Light at the end of the Tunnel

On a more positive note, it’s recommended for two Officers from the Gambia Prison Services to “be recognized and rewarded for the good services rendered” and “Justice Na Ceesay Salla-Wadda should be reinstated and her reinstatement backdated to 2017”. In the latter’s recommendation, the State notes that “the reinstatement should substitute the reappointment. Reinstatement will be in line [with] the rules of restitution and this is consistent with natural justice and fairness and taking into account her long-standing service in the justice sector both as State Counsel and Judge”.

This article is supported by the International Center for Transitional Justice (ICTJ).

The entire list sent to Gainako has been reproduced below with additional computations of the number of persons mentioned per institution as well as the number of multiple mentions. 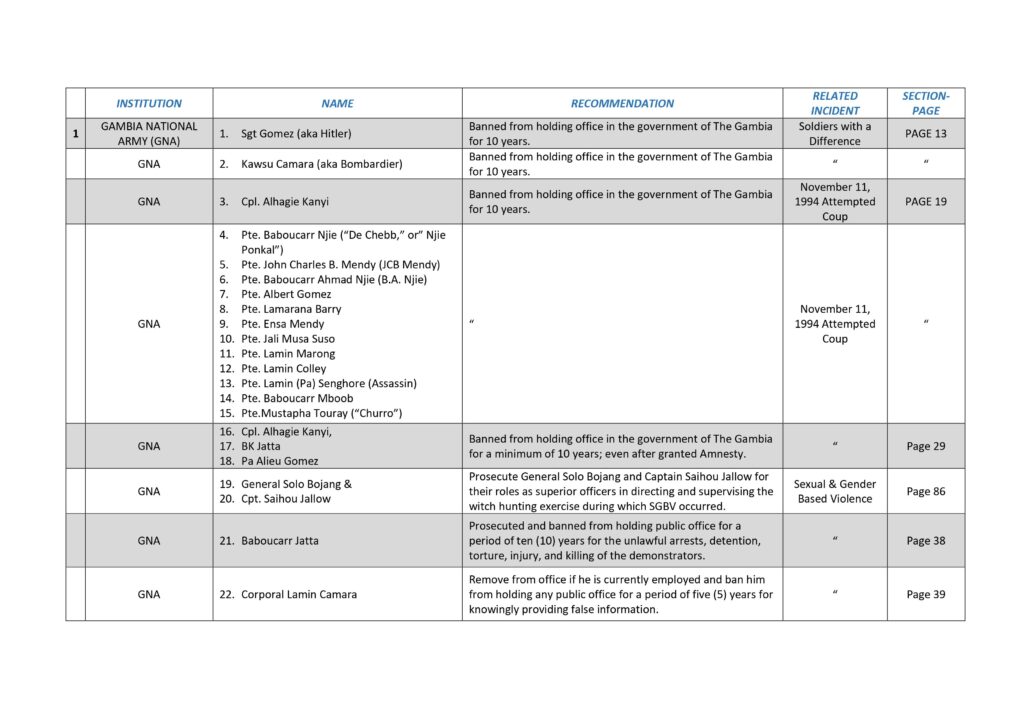 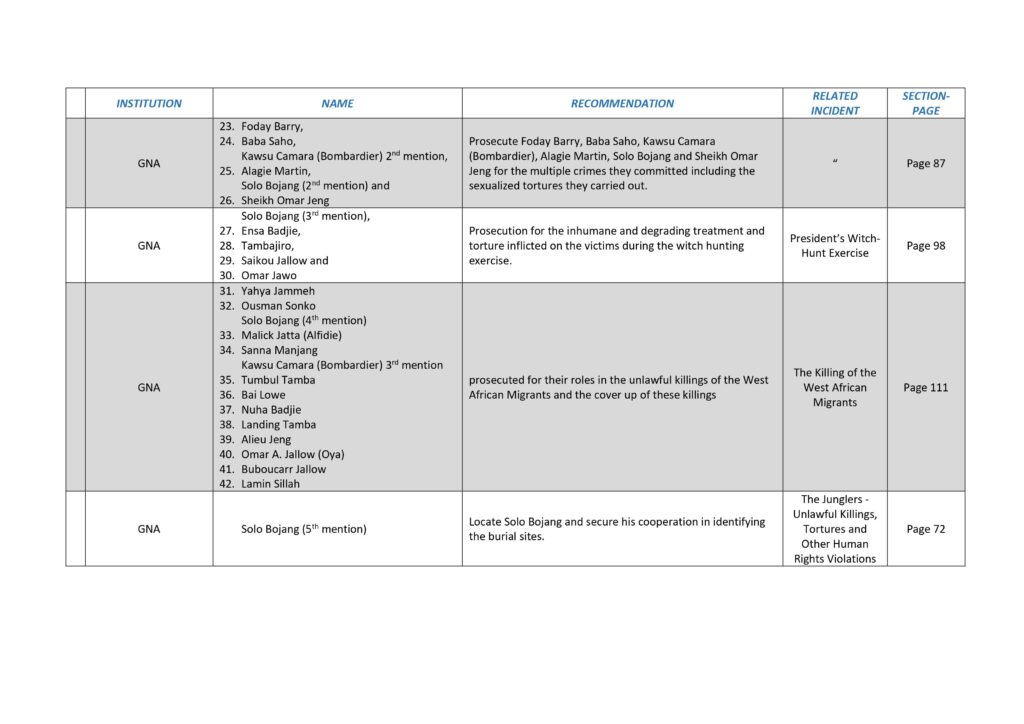 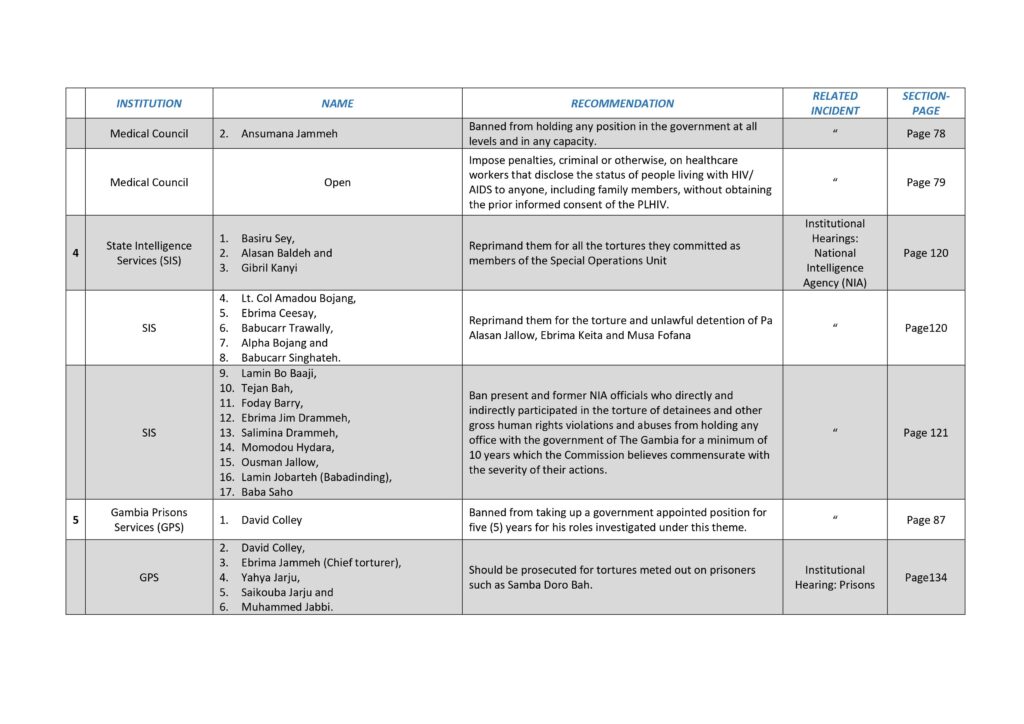 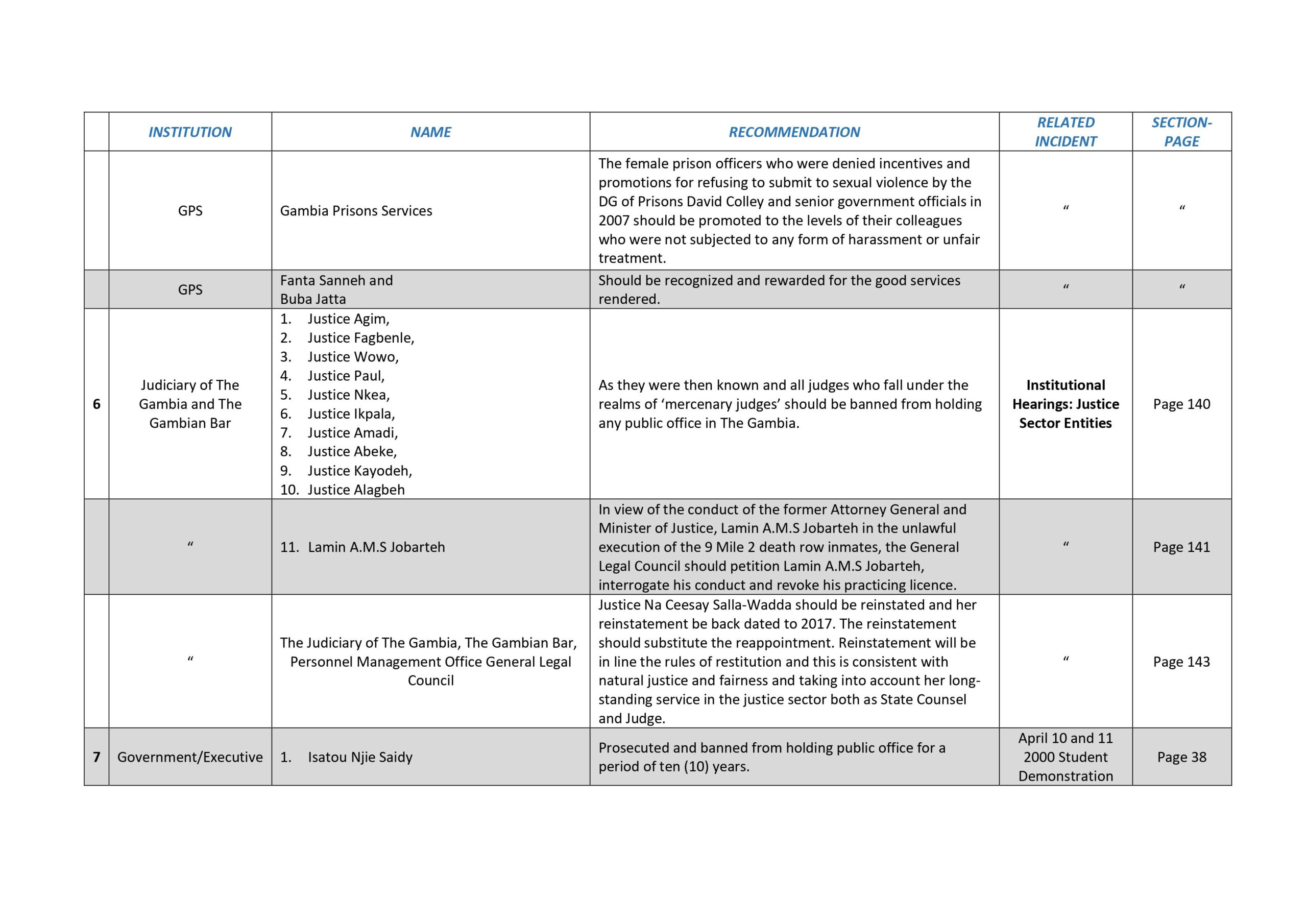 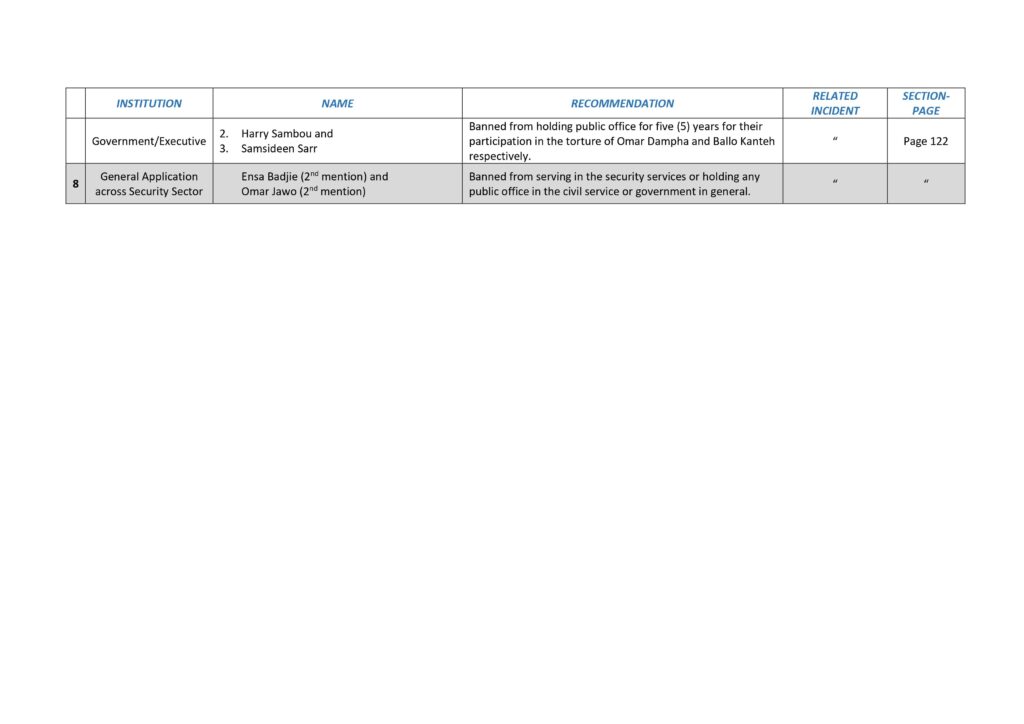