By Edrissa Jallow and Yusef Taylor

The Sixth Stake in the Nation Forum (SNF) brought together Officials from the Gambia Government, Gambians from the Diaspora and the donor community on Saturday 14th January 2023 in what has become an annual gathering to take stock of Diaspora contributions towards National Development. This year’s event took place at the Sir Dawda Kairaba Jawara International Conference Center in Bijilo.

The theme for the Sixth SNF focused on “Supporting Private Action for Public Benefit”.

Spearheaded by GK Partners and the Migration and Sustainable Development in the Gambia (MSDG) Project, this year’s event highlighted that over $712 million USD has been pumped into the Gambian Economy in remittances alone last year, 2022. Government Officials added that this amounts to over 60% of the Gambia’s Gross Domestic Product (GDP) in 2022.

In attendance at the forum were the Finance Minister, Hon Seedy Keita, the Minister of Basic and Secondary Education, Hon Claudiana Cole and the Central Bank Deputy Governor Abdoulie Sireh Jallow who provided updates on Diaspora Remittances and their impact on the Economy.

“For 2022, the interim remittance inflow to The Gambia is seven hundred and twelve million four hundred and fifty thousand US Dollars ($712,450,000.00) even though it represents [a] contraction of 8% relative to last year it is none the less significant,” said Mr Jallow during his opening speech centred on the country’s 2022 interim flows.

Remittances in 2021 exceeded $773.7 Million USD which means that total Remittances reduced by over $61 Million USD in 2022 compared to the previous year.

Proferring reasons for the contraction, the Deputy Governor noted that “the contraction is partly due to the increased digitalization of informal sectors or channels to send money as Covid restrictions eased globally. As a result, there are some of these remittances that are not captured in the formal system in our official statistics”.

The Director of the Gambia’s Diaspora and Migration Directorate (GDMD) Musa Camara, who moderated the opening session stated that remittances collected “still constitute over 60% of our Gross Domestic Projects (GDP)”. The GDMD is a Directorate under the Ministry of Foreign Affairs where Mr Camara is currently the Deputy Permanent Secretary.

Gross Domestic Product (GDP) is an economic term for all the goods and services produced and sold by a particular country within a particular period, usually the financial year of a country. According to the 2023 Approved Budget, the Gambia’s GDP in 2022 amounted to over D115 Billion Gambian Dalasis, D115,182,000,000. 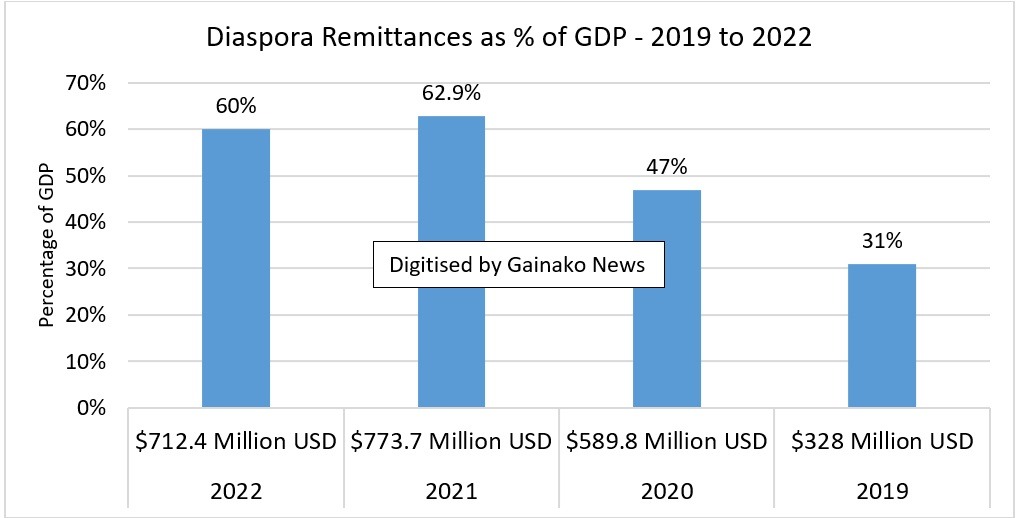 The Gambia’s Basic and Secondary Education Minister, Ms Claudiana Cole attened the event and highlighted some of the contributions of GK-Partners and MSDG towards the country’s education system.

During her speech she revealed that MoBSE signed a framework agreement with the MSDG Project which aims “to undertake practical activities aimed at optimizing private actions for the public benefit of educational development in The Gambia”.

Minister Cole explained that the agreement is based on three aspects which are listed below;

The first being “an initial co-finance of D1.8 Million Dalasi for the fitting-out and kitting-out of laboratory and other facilities in four Senior Secondary Schools in Urban and Rural Gambia”.

The second being “an online school platform created as a repository of relevant facts and figures on each and every school”. While the third is for the “MSDG Project and MoBSE to facilitate the participation of the Gambian diaspora in the National Volunteer Service”.

Edrissa Jallow is a journalist with over three years of experience working for two online media platforms. Mr Jallow joined Gainako News during the Nomination process for the December 2021 Presidential Elections. Since joining Gainako, Mr Jallow has published over 50 stories in less than a year. He is currently a final year student at the Media Academy for Journalism and Communications (MAJaC), a leading journalism training institution in The Gambia. Mr Jallow is currently the Project Manager of The Gambia Parliamentary Newsletter and reports extensively on Parliamentary proceedings.