Two Gambian Parliamentarians have condemned the Government’s decision to demolish houses in Jabang believed to be obstructing waterways and causing flash floods during the rainy season. Speaking to Hon Yahya Menteng Sanyang of Latrikunda Sabiji he vowed that he would take all possible action with fellow parliamentarians to order Government “pay adequate and reasonable compensation to those affected”. Hon Abdoulie Njai of Banjul Central promised to join his colleague to hold the government accountable for what he called selective justice.

It can be recalled that soon after flash floods affected the greater Banjul and Kombo Area in early August 2022 both the President and the Vice President visited Jabang Estate to assess the extent of the damage on different dates. Jabang Estate is a government-sanctioned project implemented by the Department of Social Security Housing and Finance Corporation (SSHFC). The first warning of the demolition was fired by Vice President Alieu Badara Joof on his site visit when he noted that buildings which are not in compliance should be broken down.

Soon after the visit, the Minister of Lands, Regional Government and Religious Affairs Hon Aba Sanyang visited Jabang “to assess and obtain firsthand information on the level of encroachments on the waterways of the said areas which resulted to unprecedented flash floods,” noted their Social Media page. In addition, the post noted that “operational action plans are concurrently being drawn as part of the Ministry’s emergency response strategy”.

Soon after the visit from the Minister of Lands the order for the demolition was issued via a letter from the Department of Physical Planning and Housing dated 20th August 2022 with the title “notice requiring removal or demolition of building/ fence erected without a development permit or declared unsafe”. The letter demanded that the buildings or fences should be removed within two days of issuance of the letter failure of which will result in the demolition of the property with the cost of demolition being charged to the owner of the property.

However, affected homeowners have raised concerns that the government sold the land to customers via the SSHFC, shifting the blame back to the government. 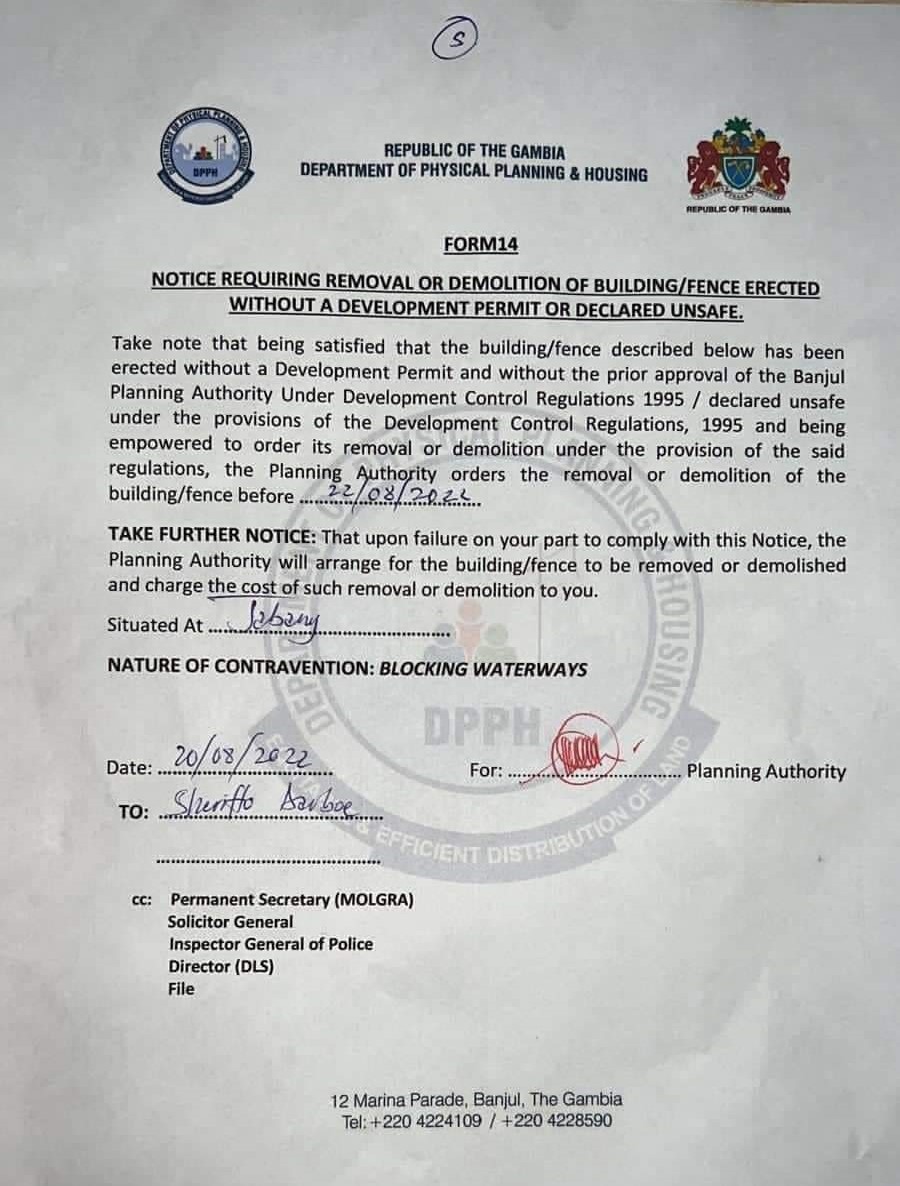 What Physical Planning is Doing is Illegal says Hon Sanyang

Speaking to Hon Yahya Sanyang for Latrikunda Sabiji he expressed serious concerns over the demolition of houses in Jabang. Hon Sanyang believes that what “physical planning is doing at Jabang is illegal and very unfortunate. These are clear signs that the Barrow-led admiration has failed Gambians woefully and he [Adama Barrow] and his cabinet should all resign to give way to a decent administration that will respect the plight of Gambians”.

Speaking in Defence of property owners Hon Sanyang noted that they “were issued a genuine lease thus they have embarked on their millions worth of projects, only to wake up one day and see those developments reduced or ground by a reckless government”. In his view “the government doesn’t have any right to demolish any structure without the court’s oversight”. He urged all “affected property owners to sue the government of the Gambia for damages”.

Hon Sanyang opined that the authorities starting with the President should “surely be held accountable and pay adequate and reasonable compensation to those affected. In fact, what feasibility studies has the government informed themselves that those properties are situated on the waterways before demolishing them? Was this based on speculation? Is it a witch hunt?”

Parliamentarian for Banjul Central, Honorable Abdoulie Njai also expressed his concern for the manner in which the demolition exercise was carried out. He first opined that “the process by which this demolition was carried out is unparalleled. I would say I think the Government was very irrational and demonstrated a non-factored outlook on the situation because I don’t think many aspects of deracination or ramifications in the aftermath of this decision” have been considered by the government.

In his view, various authorities going around identifying which houses to be demolished without a coherent plan and assessment is really inadequate to address the problem.  Hon Njai says “this is not a good show of leadership”. The preferred action “should have been a more technical and consultative approach [that] should have been taken towards finding a more progressive and conceptual settlement with regards to this issue [Jabang demolition]” said the Hon member for Banjul Central.

In his view, homes in Jabang “were provided and purchased from SSHFC [which are] all legally required documentation,” however, “if this was a real estate private own company there would have been a liberal agreement to this, but these areas were availed by the government themselves which shows an unexplainable double standard which doesn’t make any sense”.

The Hon member who is arguably the youngest Gambian Parliamentarian revealed that he made additional enquiries on the demolition exercise and found that some affected homeowners have been compensated while others are yet to be compensated.

The Hon member urged the authorities “to stop the irrational blame games and to take responsibility and admit that there are certain lapses within the state system that needs to be looked into”. He opined that the blame cannot be placed on ordinary citizens who “went through due process as citizens to acquire these lands and settle down”. Raising concern that some affected homeowners may not be able to recover Hon Njai says that the Jabang demolition “is really unfair on their side because these are valuables that sometimes most of the [victims] cannot really replace so, it’s quite sad”.

It can be recalled that President Adama Barrow intervened to stop the demolition of Jabang properties towards the end of August 2022. This was announced during an interview with the Minister of Information Lamin Queen Jammeh on the popular “Coffee Time” morning radio show with Peter Gomez of West Coast Radio.

During the interview information Minister Jammeh revealed that “President Barrow did not only order for it to stop but also instructed, in the strongest possible terms, that we identify a small group including ministers to go and engage the community of Jabang, to discuss with them, to let them understand the concern of the government and of course the political leadership and assure them that working on [the] legal basis, they will be considered by [the] government for compensation”.