The Islamic Development Bank (IsDB) has approved the financing of US$ 21 million for two of The Gambia’s development projects. In total, the IsDB has approved a total of US$ 1.6 billion for 24 new projects in 19 member countries in Africa, Asia and Europe.

According to the press release published on 19th December 2021, the money invested in the Gambia will go towards the “widening of the Bertil Harding highway project” and the “development of the University of the Gambia (UTG) Phase II Project.

Below are the main details of the US$ 21 million investment in The Gambia.

“US$ 14 million for the “Widening of BERTIL – HARDING Highway Project”.

“The project will contribute to the economic growth of the country by supporting the transport, increasing the percentage of the primary road network from 80% to 100%.”

“US$ 7 million for the “Development of the University of the Gambia (UTG) Phase II Project”.

“The project increases the number of students enrolled in UTG by 1,600, increasing the percentage of the enrolled girls to 25% and 2 schools constructed and equipped.”

The quarterly brief from the IsDB also indicates that the new commitments will secure US$ 100.8 million of which US$ 14.4 million are business insured. 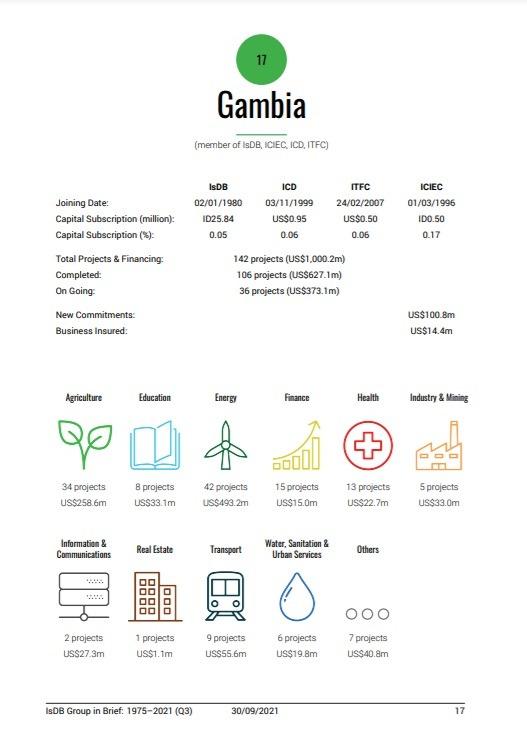 The Islamic Development Bank is a multilateral development bank that has been working for over 45 years to improve the lives of the communities it serves by delivering impact at scale. The Bank brings together 57-Member Countries across four continents, touching the lives of 1 in 5 of the world population. Its mission is to equip people to drive their own economic and social progress at scale, putting the infrastructure in place enabling them to fulfil their potential. Headquartered in Jeddah, Kingdom of Saudi Arabia, IsDB has regional hubs and centers of excellence in 11 of its Member Countries.