During President Adama Barrow’s 2022 State of the Nation Address delivered on 15th September 2022, he claimed that the Gambia is the “only country on track to achieving the Paris Agreement temperature goal of 1.5°C by 2050”.

The United Nations Framework Convention on Climate Change (UNFCC) dubbed UN Climate Change is the world’s leading institution galvanising global support to counter the threat of climate change. According to their website the Paris Agreement, often referred to as the Paris Accord “is a legally binding international treaty on climate change — adopted by 196 Parties at COP 21 in Paris, on 12th December 2015 and entered into force on 4th November 2016”.

Claim: During President Barrow’s 2022 State of the Nation Address in Parliament, delivered in the presence of the representatives of the international community, Ministers, Parliamentarians and others he claimed that “the international community recognises The Gambia as the only country on track to achieving the Paris Agreement temperature goal of 1.5°C by 2050”. Watch this one-minute excerpt from the President’s speech in the video link below.

FactCheck: Our reporter managed to get hold of The Gambia’s “Third National Communication (TNC) — under the UNFCCC” published in July 2020. The report notes that “The Gambia ratified the UNFCCC in 1994 and became obligated to submit national communications as per [the] requirement of the UNFCCC”.

To verify our findings our reporter made reference to the Climate Action Tracker (CAT), a collaborative independent scientific analysis tool “that tracks government climate action and measures it against the globally agreed Paris Agreement” target to limit temperature rise below 2°C with the ambition of limiting it further to 1.5°C”. The CAT is pioneered by Climate Analytics and NewClimate Institute and “has been providing this independent analysis to policymakers since 2009”.

According to the CAT Climate Target Update Tracker published on 9th November 2021 “The Gambia submitted its Second NDC in September 2021”. Most importantly the update indicates that The Gambia’s status changed from “1.5°C Paris Agreement compatible” to “Almost sufficient”. 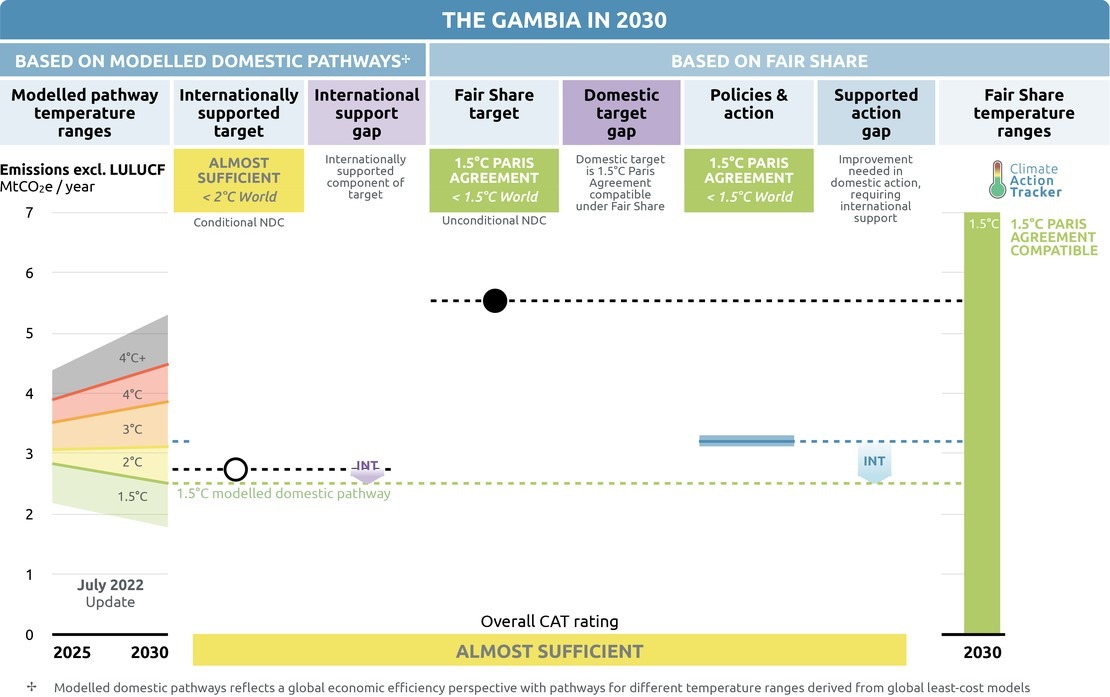 A more recent publication issued by Forbes in 2021 under the headline “the only country known to be on course to achieve 1.5°C climate target gets off track,” details how The Gambia is no longer “1.5°C Paris Agreement Compatible”. The report highlights The Gambia as “the only country whose plans to tackle climate change were deemed compatible with the goals set out in the 2015 Paris Agreement,” however, it “has lost that status”.

The Forbes report notes that after The Gambia submitted its NDC in September 2021, CAT downgraded The Gambia from “1.5°C Paris Agreement Compatible” to “Almost Sufficient,” a status currently held by eight other countries.

Verdict: This indicates that the President’s claims are False. The Gambia is currently not the only country categorised as “1.5°C Paris Agreement Compatible”. Since September 2021 when The Gambia submitted its NDC its category has been downgraded to “Almost Sufficient” joining a list of eight other countries namely; Costa Rica, Ethiopia, Kenya, Morocco, Nepal, Nigeria, Norway and the United Kingdom.

Therefore, the President’s claims that The Gambia is the “only country on track to achieving the Paris Agreement temperature goal of 1.5°C by 2050” is FALSE.