You are at:Home»Human Rights»Is Gambia Government Prioritising Crimes Against Properties over Killing of Civilians?

Final year University student Kebba Secka was killed in early July 2019 after he was stabbed by Police Officer Lamin Trawally near Palma Rima Junction. According to witnesses Kebba, fondly called Daddy Boston, was chilling with his friends when he was attacked by Lamin Trawally and an alleged second assailant.

At a press briefing organised by the Justice Ministry on September 14th 2019, Gainako’s Flex Dan questioned Hon. Abubacarr Tambedu, the Justice Minister, if it “would it be fair to say that the Public’s concern is that the [Government’s] focus is on the burning of properties and not so much on the killers of Kebba “Daddy Boston” Secka and the alleged torture of Ousman Darboe?”

In response the Justice Minister highlighted that “the Police did a brilliant job following the murder of Kebba Secka. Let us admit they arrested the culprit who was a Police Officer and that culprit is in detention. Now you can’t say that the Police have prioritised the burning over that incident because the culprit, the alleged suspect in the murder of Kebba Secka, a Police Officer for that matter is in custody and the Police acted very swiftly.”

Contrary to the Minister’s explanation, the family representative of Kebba Secka, Yusupha Njie, rebutted this at a Team Gom Sa Bopa press conference held on July 29th 2019. According to Mr Njie “in the press release by the PRO they wrongly stated I don’t know whether to call them untruths or lies or calculated lies.”

Yusupha denied the Police press release which stated that there was an autopsy done on Kebba Secka and that the Police did not move his body. Instead he claims that “OJ the driver is here in this room, he was the person that moved the body from Serrekunda hospital to Banjul hospital”.

“In the press release by the PRO they wrongly stated I don’t know whether to call them untruths or lies or calculated lies.” ~ Yusupha Njie

Yusupha’s explanation of how the suspect Lamin Trawally was arrested shed some light on the Justice Minister’s claims that the Police did a brilliant job following the murder of Kebba Secka. According to Yusupha, “Lamin Trawally was caught because the boys of Kotu did an investigation and actually identified him.” He provided further clarification that “[Lamin Trawally] fought with two other boys in Kotu South two weeks prior to stabbing Daddy [Kebba Secka] and he dropped his Police ID card”. 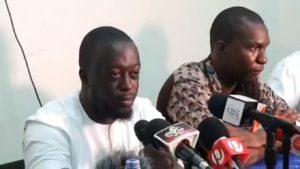 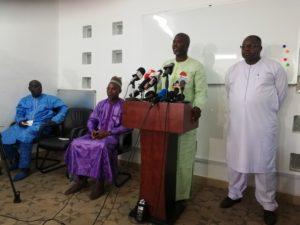 “It was that card that was used when word got round that a Police had stabbed Daddy. We live in Kotu West it was the boys in Kotu South that he fought with two week earlier. And it was his card that was used by the boys some of who are in the room and did their own investigations. Visited three of the boys that are in this room, Daddy’s friends meet them in the Police cells and showed them the card and they identified Lamin Trawally as the suspect.”

According to Mr Njie “It was then that he was arrested and he confessed to his crime. The Police didn’t investigate, they didn’t even have a clue what was happening, they didn’t know”. This explanation of how Lamin Trawally confessed to his crimes leading to his arrest is clearly at odds to the Justice Minister’s claims that the Police did a brilliant job in the aftermath of Kebba Secka’s death.

“The Police didn’t investigate, they didn’t even have a clue what was happening, they didn’t know” ~ Yusupha Njie

Meanwhile at the Justice Minister’s September press conference he insisted that “there have been improvements on the way the Police are dealing with ordinary Gambians compared to the past”. According to him “there will be occasional excesses” and “the challenge for [the Government]really is to try and prevent it from happening and that when it happens occasionally we address them”.

In responding to questions on Amnesty International’s recommendation for the Anti Crime Unit to desist from arbitrary arrests, the Justice Minister stated that “we trying very hard to make sure that everyone who is arrested in this country is brought before a court within 72 hours. I think that is a credit to the new government unlike in the past”.

However, according to Yusupha Njie three of Kebba Secka’s friends were detained for over 72 hours over the murder of their friend. Speaking at a press conference in late July, Mr Njie stated that “there are three people in this room who were arrested beyond 72 hours because of Lamin Trawally’s crimes, his [Kebba Secka’s] best friends they were arrested beyond 72 hours and they’re in this room. So [detention beyond]72 hours is a normal practice for the Gambian Police”.

Where is the second suspect?

Last month Gainako’s Flex Dan published an article titled “Where is the second suspect? says late Kebba Secka’s family“. In the article the family representative, Yusupha Njie alleged that a second suspect is involved and also explained how they were misinformed by the Police PRO Lamin Njie.

The family are raising questions to know if the second suspect will be charged and are dejected that Lamin Trawally was taken to court without the knowledge of the family. The fact that the media was not present and nobody knows about it further strengthened their belief that “it was a deliberate move by the PRO” who Yusupha challenged, saying “maybe he can clear that”.