“My Dad used to say, don’t tell me what you value. Show me your budget, and I’ll tell you what you value”. These are the words of then United States President-Elect, Joe Biden speaking on successor President Donald Trump’s Budget priorities. Turning our attention to the Gambia, after four years of Governance what has President Barrow showed to be his priority? This is the focus of this publication.

To ascertain the Barrow Government’s actual expenditure, we conducted some analysis using the 2019, 2020 and 2021 Approved Budgets which contains the Government’s Actual expenditure for 2017, 2018 and 2019 respectively. According to data from the Ministry of Finance and Economic Affairs (MoFEA) the Gambia Government spent over D35 Billion in three years from Loans, Grants and Government Local Funds. 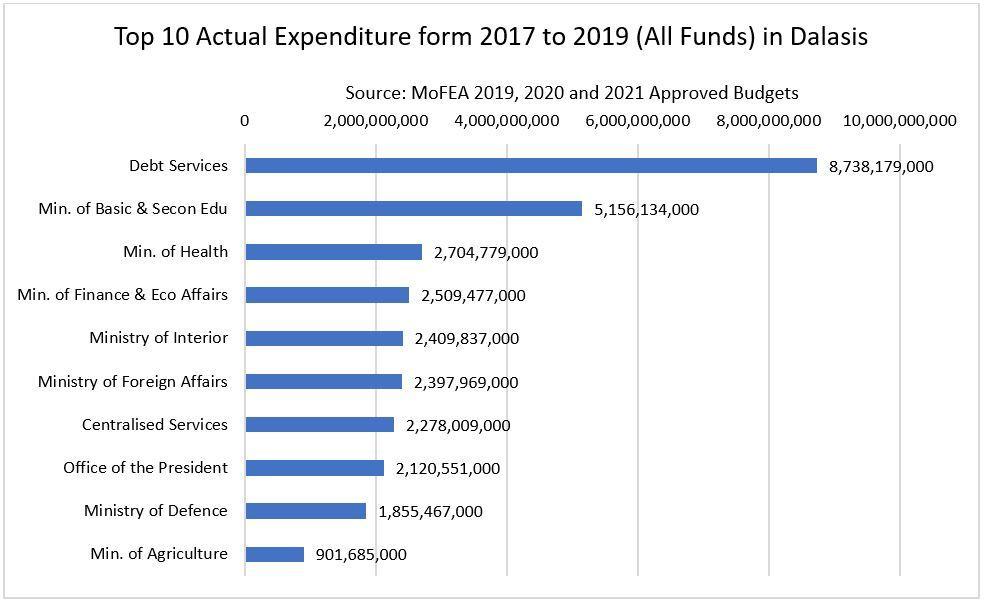 10 Highest Priorities of the Barrow Government

The data shows that almost D9 Billion has been spent on Debt Services accounting for almost a quarter (24.4%) of all Government’s Expenditure during this period. It’s worth noting that the 2019 Approved Budget highlights that the Government spent nothing on Debt Service in 2017 Actual Expenditure, which does not seem realistic. Besides 2017 it can also be seen that 2018 and 2019 both show that Debt Service absorbed the highest actual expenditure. So, as expected Debt Service which is the repayment of Debt absorbed the highest Government Actual Expenditure, followed by the Ministry of Basic and Secondary Education which has absorbed 14% (D5.2 Billion) of the total actual expenditure (D35 Billion).

Next on the top 10 list is Security. Security as a sector combines two Budget Entities, namely; Defence (5.9%) and Internal Security (6.7%) which together have absorbed almost 12% of the total actual expenditure ranking it as third highest after Ministry of Secondary Education. If these two Budget Entities are combined it shows that the Gambia Government has spent over D4.2 Billion on Security even though ECOMIG has been providing Security to the Gambia since President Barrow took power in 2017.

Some of the notable mentions in the top 10 highest list are; the Ministry of Health over D2.7 Billion (4th highest), the Ministry of Finance and Economic Affairs over D2.5 Billion (5th highest) and the President’s Office which spent over D2.1 Billion (7th highest). Ministry of Agriculture ranks as number 9 with an expenditure of less than D1 Billion over the three year period. This is because Security has been combined as one sector. 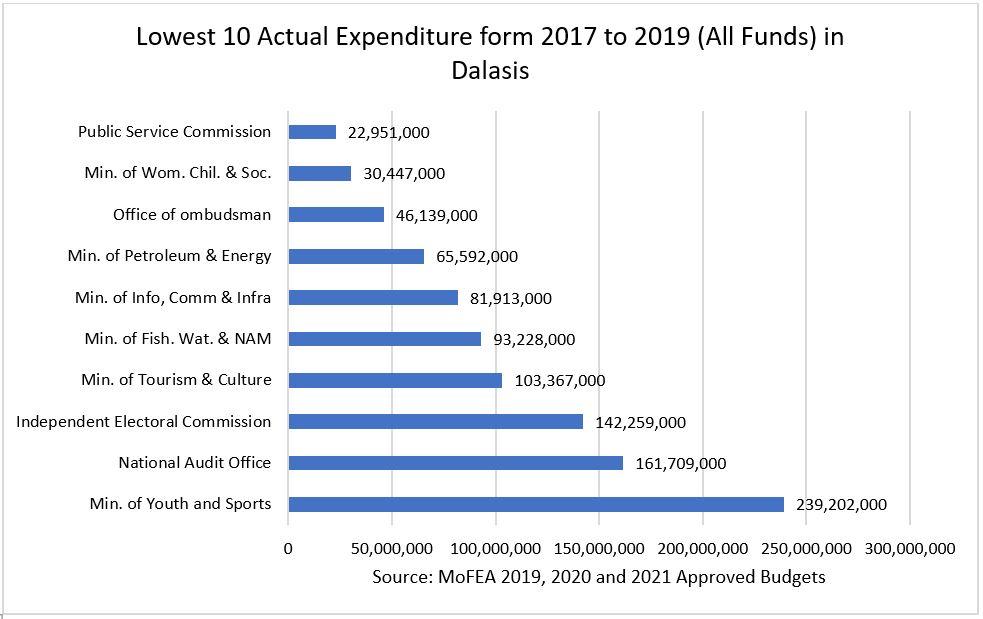 10 Lowest Priorities of the Barrow Government

On the lower end of the scale, it can be seen that the Government’s lowest actual expenditure has been on the Public Service Commission which almost spent D23 Million from 2017 to 2019. This is closely followed by the Ministry of Women Children and Social Services which absorbed over D30 Million from the total expenditure of D35 Billion. Both Public Service Commission and Ministry of Women, Children… have absorbed 0.06% and 0.09% of the D35 Billion respectively. This highlights that the Government is not prioritising social services. However, it must be noted that the Ministry of Women, Children and Social Services appears to have been created in 2019 which explains why so little has been spent in this Ministry.

All expenditures in the 10 lowest categories each account for less than 1% of the actual expenditure from 2017 to 2019. One of the notable appearances at the lower end of the spectrum is the Ministry of Youth and Sports which is the 10th lowest expenditure accounting for only 0.67% of the actual expenditure. With a total expenditure of over D239 Million, Youths and Sports ranks higher than Tourism and Culture, one of the Gambia’s most important sectors creating employment and generating revenue for the country. Tourism and Culture ranks 7th lowest with a total expenditure of D103 Million over the three-year period. Tourism only accounts for 0.29% of the total Actual Expenditure (D35 Billion). 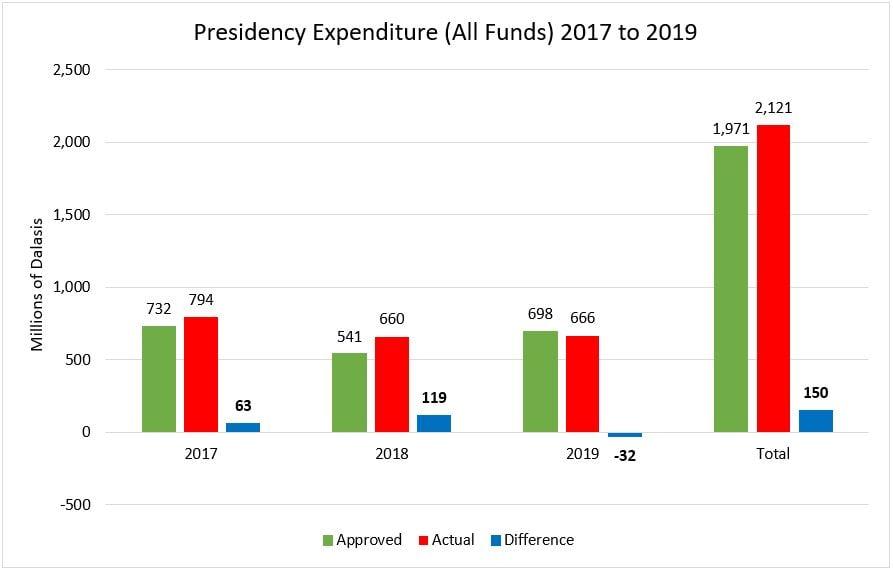 Presidency Expenditure Approved vs Actual 2017 to 2019

It would be useful to assess how the Government has overspent and underspent in the various sectors and budget entities. This will require another detailed analysis comparing the actual expenditures to approved estimates. Above is a preliminary study which shows that since President Adama Barrow came into office in early 2017, his Office has spent over D2.1 Billion in three years (2017 to 2019), averaging over D700 Million every year. Within this three year period, the Presidency has overspent by D150 Million with the largest overspend being recorded in 2018 (over D119 Million). It’s Gainako’s intention to publish similar analysis for the various sectors.

Below is a table showing the data used for this analysis which lays out the actual expenditure figures used from 2017 to 2019. 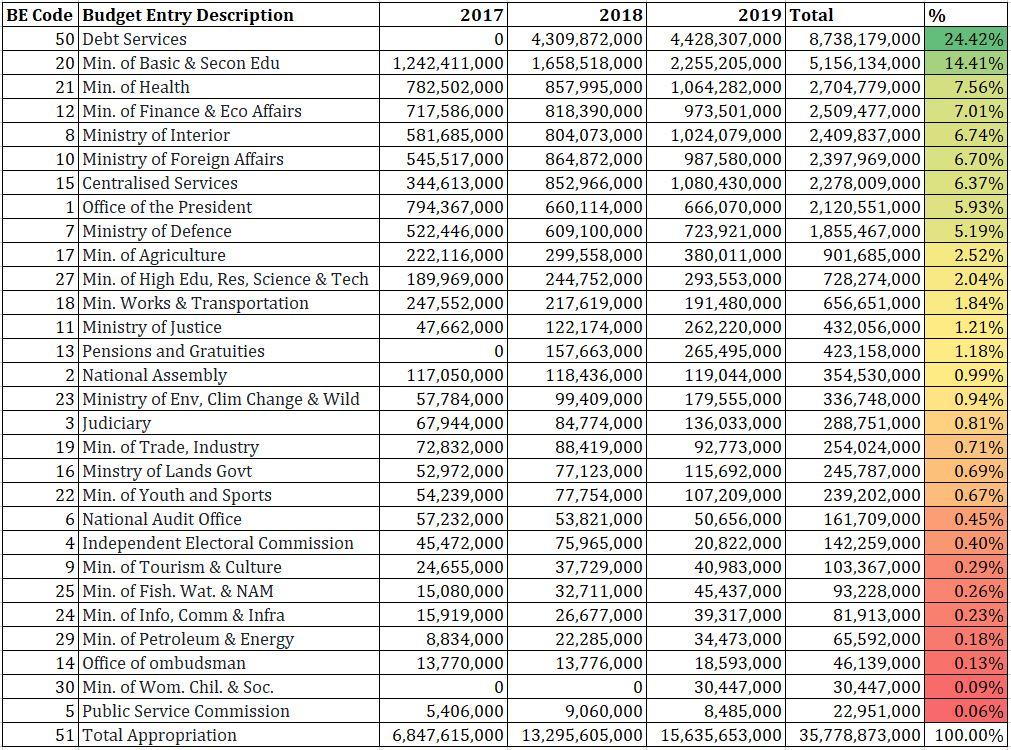