When Gambians decided for a change of leadership, they indeed voted out a leader but not him alone but the system that kept him entrenched and allowed him to violate our rights as a people repeatedly. We, as a people were elated and expectant, hoping that the new leadership would in the least, meet our noble aspirations, of living in the smiling coast, a nation built upon the solid foundation and good governance.

Alas, this hope is dissipating at a pace that has now become a concern for all and sundry except for those who have their heads buried in the sand.

This concern has now manifested itself right before our eyes in the recent arrest, in the guise of being called for questioning and subsequent imposition of the charge of false publication and broadcasting on, a dear brother and colleague in the person of Mr Madi Jobarteh, on 30th June 2020. On this day, Madi was called by ASP Darboe of Kairaba Police Station, who asked him to report to the said station to “clarify” a few questions relating to his interview with the media on Saturday, June 27, 2020, at the ‘Black Lives Matter’ protest, where Madi amongst other things spoke about the torture and detention of Ousman Darboe, killing of Haruna Jatta, and Kebba Secka. Upon his arrival at the station, he was received by Deputy Commissioner Pateh Bah who told him that they wanted the person of interest to clarify his comments that the Gambia Government “had not done enough to ensure justice for the killing of the three persons mentioned above”. May I pause here to ask, who amongst us has seen a report on investigations on these three deaths that are all allegedly connected to our security forces. What about the questions being asked by their families, who are helping them understand what went wrong and who is responsible? Will they have to wait for another TRRC to get answers and eventual closure?

Madi Jobarteh, we are told, was informed that he was not under arrest, but yet prevented from leaving the office of the Deputy Commissioner by the officers of the law. He was asked to write out a statement, which he reluctantly did as he was called to the police station to clarify… even though he was not under arrest, nor a suspect or a witness to any case. Upon writing the statement without which he was held against his will, Madi Jobarteh was then charged with ‘false publication and broadcasting’. He was kept in the police station for two hours and then released on bail and asked to report the following day in the morning, (1st July 2020), he complied and reported at the appointed time. He was once again asked to reported the following day again, 2 July and then asked to report at the prosecution unit of Kanifing station. Upon arrival, Madi was informed that he is going to be charged for false publication and broadcasting based on the comments he made at BLM March and now asked to report again on Monday. Madi is being charged under the same Jammeh laws designed to muzzle and repress freedom of expression. The same law that was used by the previous regime as an instrument of oppression to stifle dissent and media freedom. 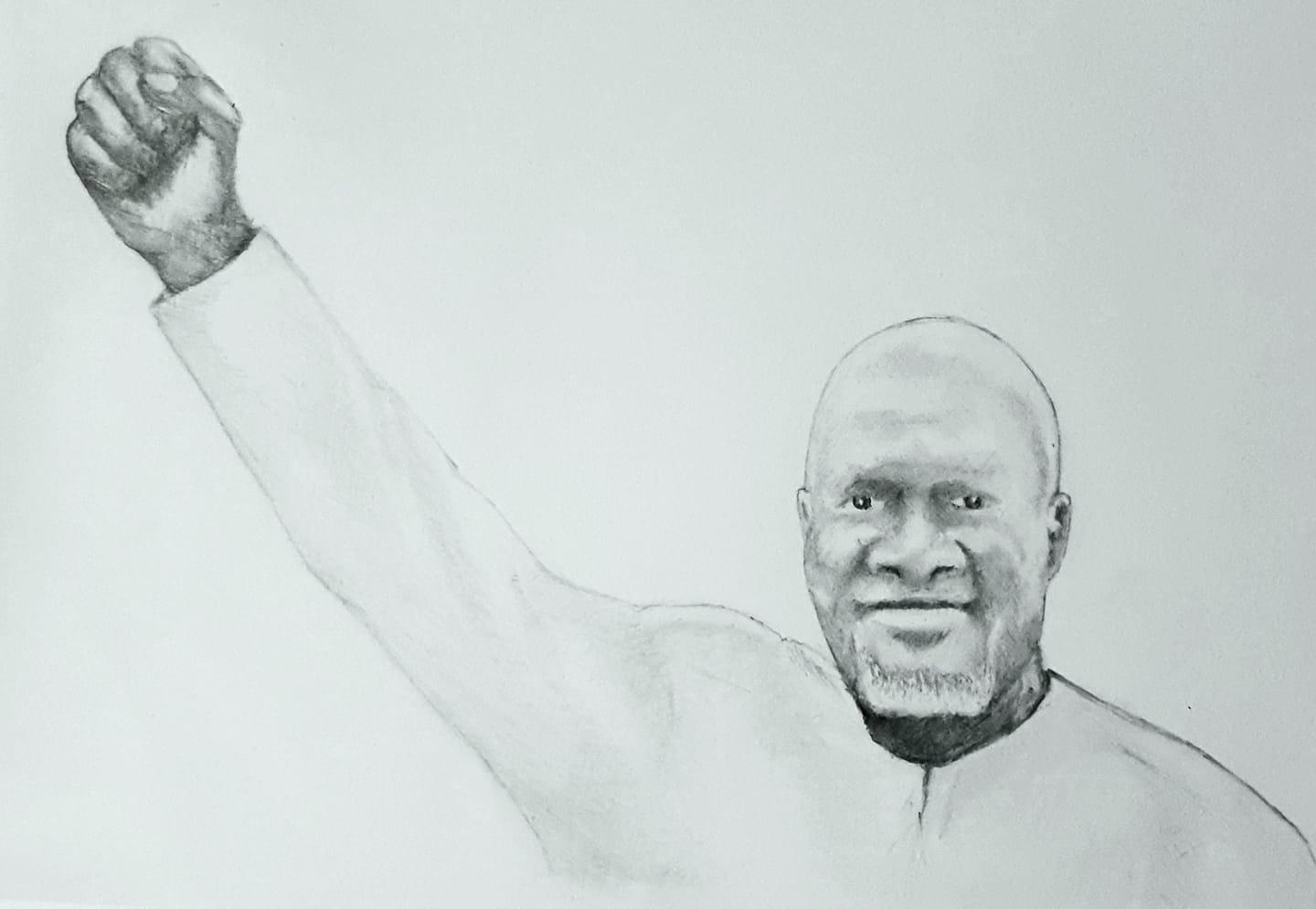 For a government that prides itself with leading a nation where freedom of expression thrives after 22 years of dictatorship, this systemic intimidation and harassment of citizens goes against the grain of their preaching. We will like to inform the state that Gambians have gone through nursery education of false promises by politicians, to primary school of systemic intimidation and being spied upon, through secondary education of unlawful arrests and detentions, to the University of disappearance, torture and unlawful killings and graduated on the 1st December 2016 with a number of degrees to PhD level, in Boldness, fearlessness, confidence and courage to withstand any system that will desire to take us back to those lower grades. In 22years we have seen it all been through it all and have now decided that NEVER AGAIN will we be dragged into the evil clutches of tyranny and dictatorship. We will not be silent and we cannot be silenced.

It is, for this reason, we gather today to convey our utter distaste and disappointment of this act of intimidation as shown in this situation and those that preceded it.

We are confident that Mr Jobarteh’s comments as stated in the interview, falls well within his constitutional and fundamental Human right of Freedom of speech and Expression. We find it unacceptable that the Gambian Police force under our current democratic dispensation, would have the audacity to arrest and intimidate any citizen or anyone for that matter for legitimately criticizing any organ or agency of the State at a protest. This is cause for great concern and brings back memories of the dark days of tyranny which we as Gambians rejected when we voted for change on Dec 1st. We believe that freedom of expression is the cornerstone of democracy and many a time, such expressions will be critical of the state or state organs. The reaction to such criticism in a democracy is not to clamp down or try to prosecute individuals or rights activists. The police or the state could have simply refuted Madi’s remarks or clarify any part of his statement that they feel is not factual or don’t agree with. The state as our protectors should not use draconian and repressive laws inherited from a dictatorship to prosecute Madi Jobarteh or anyone for that matter. This is not what is expected of the new Gambia founded on respect for good governance and respect for human
rights.

We therefore unequivocally condemn this act which we consider to be unlawful and a violation of the rights and freedoms of Madi Jobarteh as guaranteed by the 1997 Constitution, Section 25 1a which states that “ Every person shall have the right to freedom of speech and expression, which shall include freedom of the press and other media.” The actions of the Police constitute a blatant abuse of power and a direct violation of the Constitution.

It can be recalled that the police had also called for questioning, Dr Scattred Janneh, the GDC Party Leader Mama Kandeh, APRC Interim Party Leader Fabakary Tombong Jatta and Dr Ismaila Ceesay of the University of the Gambia in 2017 based on these citizens quest for state accountability.

In light of the above, the Gambia civil society hereby calls on the state:

The longer these reforms and the quest for truth are delayed the more we will likely continue to see a repeat of infractions by your security forces to muzzle freedoms to assemble, protest, and express opinion in a democratic society.

Our nation stands at a crossroad, the impact of Covid 19 is yet to be fully assessed and understood, have we as a nation considered the uncertainty in the hearts of our people about the future, the dilemma of the single parent to feed her children, the embarrassment and confusion of parents unemployed yet have to pay school fees in September, two short months from now. The allegations of corruption of public officials as highlighted by the Minister of Health and the Research conducted by Gambia Participates are yet to be addressed. The uncalled for hirings and firings as in the days of tyranny, the fresh wounds and pain of victims of human rights violation for 22yrs and of course a Constitutional review process that is yet to reach a logical conclusion, these and many more are all issues we the people are grappling with and have a lot of unanswered questions. With all this going on right in this tiny nation of ours, is this really the time to clamp down on freedom of Expression. Of course not.

Let me hasten to say, Gambia, we must not allow our disappointment of today to degenerate into frustration and hopelessness, this is no time to be discouraged or give up on our dear nation but rather “the time to make real the promises of our Democracy” as Dr Martin Luther King Jnr. aptly put it. So let us look beyond this dark tunnel of national challenges to the light of a new Gambia, not only in word but in deed. A nation with a leadership sensitive and empathetic to the pain of its people. A smiling coast where politicians are servant leaders with a passion for change for the upliftment of the people.

There is light at the end of the tunnel, fellow Gambians, we decided once, God intervened and change was made possible in a peaceful manner that shocked and endeared us to the world. We the citizens of Gambia will Never Again allow tyranny in any shape or form to take root in our budding democracy.

Thanking you all for your unflinching commitment to a thriving democracy and making
time to join us here.

Stay safe, stay positive in this smiling coast we will all smile again.

God bless you all, God bless our Motherland The Gambia.

For The Gambia our homeland.