According to the Executive Secretary of the Media Council the Gambia (MCG), Mr Junkung Jobarteh, four media houses have received rulings on complaints brought against them and have decided not to appeal. The names of the media houses have not been revealed but the type of violations and rulings reached were discussed with MCG’s Executive Secretary.

The MCG is an independent body tasked by the Gambia Press Union (GPU) to self-regulate and hold the Gambian Media to account. MCG Chairperson, Mr Nana Grey-Johnson told members of the media to adhere by the GPU’s Code of Conduct in their maiden press conference at the GPU’s Fajara Office on June 4th 2020.

Almost six months after being established I asked Executive Secretary, Mr Jobarteh, which media houses have been found wanting. To this, he explained that “unfortunately, I can’t reveal their identity to you at this moment because we have this confidentiality clause that I cannot divulge right now”. However, Mr Jobarteh revealed that “on the 23rd of December [2020] the Media Council will be two years and we will possibly provide a report to the public on what has happened so far including the cases we dealt with”.

I asked Mr Jobarteh to provide more details as to what kind of violations that the MCG has been dealing with. In response, he explained that “the violations are normally ethical misconduct, we had one on a labour-related issue that also was discussed. Mostly on ethical issues, the usage of certain languages. Usage of certain inappropriate photos in the news items. Misuse of photos for a person wrongly. Such as using my photo for another person for example.”

Asked for more details on the MCG ruling and if it involved a fine or any disciplinary action, Mr Jobarteh said that “so far there was no fine given in any of the cases but we had given recommendation such as an apology, right of reply to the aggrieved persons. Pursuing persons like the labour issue for the parties to pursue it further with the other relevant entities.”

According to Mr Jobarteh the four media houses which were dealt with did not appeal the case and in his view are satisfied with the ruling.

The revelations were hinted to journalists during a GPU workshop [on 9th December 2020], where journalists and managers reviewed a survey on the “Working Conditions of Media Workers in the Gambia”. The survey highlights that 39% of Gambian Media respondents “have suffered discrimination at work”. Perhaps most worrying is the fact that “there has been an increasing concern about the public’s decreasing lack of trust in the media”. 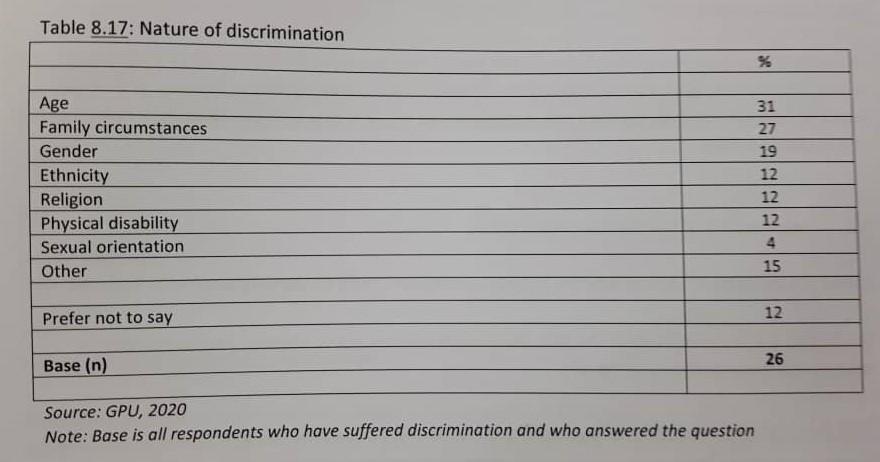 Looking at the type of discrimination which is most meted out on Media Practitioners it can be seen that 31% of respondents surveyed out of 26 indicated that they had faced age discrimination in their work place. This was followed by “Family Circumstances” and “Gender”.

Madi Jobarteh: What does Barrow Understand or Not Understand?

Covid-19 and Farmers: The Impact of the Pandemic on Horticultural Women in Bakau