The Gambia’s former Majority Leader called for the resignation of the Minister for Youth and Sports after his wife was reported to have been paid per diem of £2,800 (approx D170k) for a fourteen-day trip to the United Kingdom and Turkey from July to August 2022. Minister for Youth and Sports, Hon Bakary Badjie was also paid per diem of £4,200 for attending the Commonwealth and All Islamic Games.

Hon Kebba K Barrow called for the Youth Minister’s resignation on Monday 19th September 2022 during Parliament’s debate on President Adama Barrow’s 2022 State of the Nation Address. Hon Barrow who won re-election under a United Democratic Party (UDP) ticket was adamant that “the Minister of Youth and Sports should resign”.

In his brief argument, Hon K K Barrow as he’s fondly called believes that the Minister for Youth and Sports “defrauded the country of over three thousand euros (€3,000) giving it to a wife who is not a member of the delegation and estimate nonresident of the republic of the Gambia, taxpayers’ money one hundred and seventy thousand Dalasis (D170,000)”.

In his view, Minister Badjie “should be ethical [and] come forward and resign if the President or the Executive does not want to sanction him,” said the Kombo South Parliamentarian. 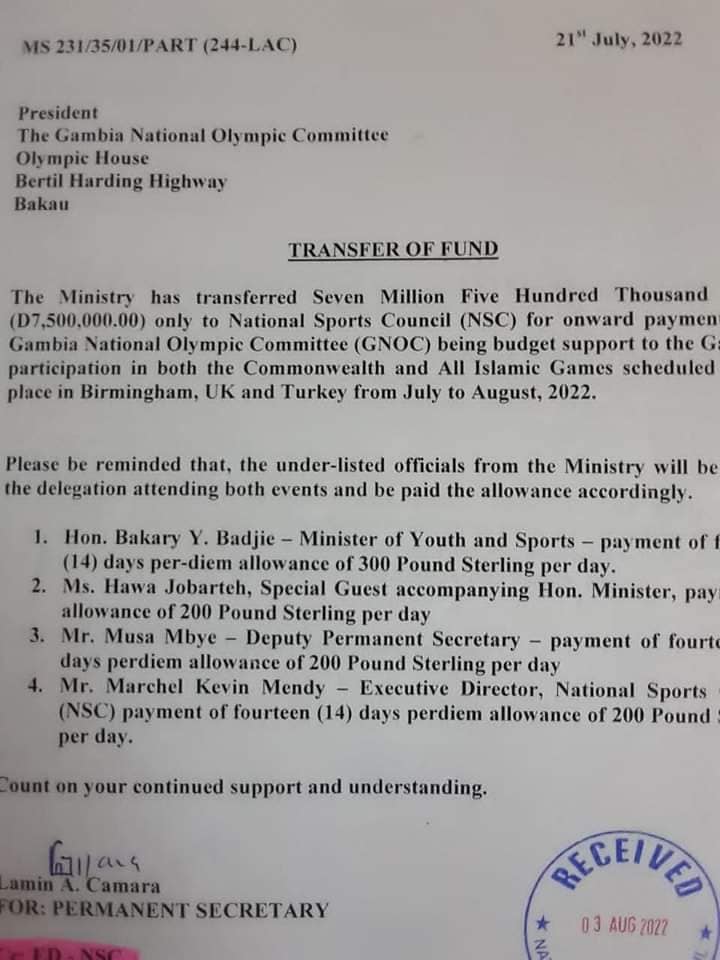 A letter leaked towards the end of August 2022 highlighted that D7.5 million had been paid to the “National Sports Council for onward payment of the Gambia National Olympic Committee (GNOC) being budget support for the GNOC participation in both the commonwealth and all Islamic games scheduled to place in Birmingham, UK and Turkey from July to August 2022”.

The letter also instructs two more payments of £200 per day for 14 days, putting them on par with the amount received by the Minister’s Wife. The two Government Officials identified in the memo are Deputy Permanent Secretary Mr Musa Mbye and Executive Director of the National Sports Council Mr Marchel Kevin Mendy.

Besides not being a staff to be eligible for per diem payments, it was revealed that the Youth and Sports Minister’s wife didn’t travel to the United Kingdom to attend the Commonwealth Games in Birmingham. However, she was still paid for the trip despite not travelling to the United Kingdom.

Speaking to journalist Omar Wally, Minister Badjie confirmed that his wife “was paid [but] she didn’t go. Per diems or allowances are not paid after the event they are paid prior to the event”. During his interview, Hon Badjie explains that his wife’s visa was delayed similar to Gambian Trackstar Athlete Gina Bass.

Given the public outcry, the Minister released a statement responding to the public’s concerns. In his letter Minister Badjie claims that he is aware that “some people are disappointed by news making the rounds about me. You do not have to be. I am being wrongly judged. This message is to clarify and clear my name of any wrongdoing”. In his view, he “acted in good faith”.

“From the onset, neither I nor the Ministry engaged in any clandestine or fraudulent transaction. This process was transparent and that is why the said letter in circulation was not treated with confidentiality,” said Hon Badjie.

“Secondly, the inclusion of my wife to the event was not a personal choice. I neither ask from nor did I impose it on any person or authority. It was a privilege extended to me and other invited dignitaries by the Commonwealth Secretariat”.

Arguing that he sought advice, Hon Badjie noted that he “made consultations with relevant and competent authorities and have been assured that paying allowance to my wife under the circumstances is justified and not at variance with law or acceptable practice”.

However, he agreed to return the payments after conducting wide consultations “on this issue and [he has] come to the conclusion that the right thing to do is for my wife to refund the entire money paid to her”.

A defiant Minister Badjie called for an investigation on the matter and says he’s ready to face the consequences if found wanting. He concluded his statement by inviting “the state or any competent authority to launch an independent investigation into my conduct. I have zero doubts about my innocence and I am ready and willing to face the consequences if I am found guilty of any wrongfully”.

Below is the interview conducted by Omar Wally with the Minister for Youth and Sports Hon Bakary Badjie.