Between 2008 and 2009, Gambia’s Former President Yahya Jammeh launched an assault on the rights and dignities of innocent citizens, mostly the elderly, by accusing them of being witches and wizards.

Those accused of being either witches or wizards were forced to drink a poisonous herbal concoction. Some died as a result.

While the exercise was widely known at the time, to be going on, the extent of the damage caused and the massive human rights violations allegedly committed, were exposed by The Gambia’s Truth Commission (the TRRC) between 2019 and 2021.

The former President has a strong belief in superstition, supernatural activities and practices witchcraft.

His assault on the elderly started in his home village, Kanilai, believed to have been initiated in response to his aunt’s death which he attributed to witchcraft.

The “witch-hunting exercise” as it was called, formed part of the TRRC’s major investigations establishing the causes and nature of massive human rights violations allegedly committed by Jammeh, members of government and security forces.

According to findings by the Truth, Reconciliation and Reparations Commission (TRRC), the witch-hunting exercise which started in Kanilai, targeted villages like Sintet, Jambur, Essau, Barra, Mankumbaya, Galoya and other settlements across the country.

The victims were forcibly removed from the security, privacy and comfort of their homes, offices, and communities and taken to unknown destinations and detained by the “witch hunters” and security personnel.

It was also gathered that the witch-hunt was used to oppress personal enemies and execute personal battles against individuals. The non-institutional witch-hunting exercises generally targeted older persons and less privileged members of society.

These victims were forced to drink bitter or unpleasant herbal concoctions thought to be sourced from “Kubejera” and “Talo” local plants identified as toxic to the body that causes hallucinogenic reactions when taken.

WAVE: “We Were Accused” Stories to Build Broken Dignity of Witch hunt Victims

Testimonies received established that the witch-hunt was used to persecute personal enemies and execute personal vendettas against individuals with impunity as seen in Sintet where the village chief (Alkalo) was targeted, and in Jambur, which was considered an opposition territory.

To instil fear and ensure full compliance with the witch-hunting exercises, victims were threatened with guns and ammunition, tortured, and subjected to other inhuman and degrading conditions including the deprivation of food and medical attention.

“I was selling peanuts in the village when one man held my hand and asked me to get into a bus. I asked them where we were being taken but they did not respond,” Masirending Bojang, one of the victims told the Truth Commission.

As she testified, her oldest son, Abdoulie Bojang, a private security consultant, sat by her.

The Commission found that the incident continues to have serious impacts on the lives and livelihood of victims and their families. Many victims also lost their means of earning a living because they were no longer fit to work. They were forced to spend the little money they had on medical treatment but it didn’t alleviate their suffering.

The main perpetrator behind the “witch-hunting exercise” is Yahya Jammeh.

On his orders, so-called “witch doctors” from Guinea or Mali forcibly abducted Gambians with the help of the following:

The Truth Commission as spelt out in Section 30, sub-section 1 and 2 of the TRRC Act submitted its reports and recommendation to the government on 25th November 2021.

Up to 1000 or more people are believed to have been abducted and inhumanely treated on allegations that they were witches and wizards.

The government after receiving and reviewing the reports and recommendations, published a White paper on 25th May 2022.

The government has since accepted almost all the recommendations in relation to the witch-hunt. Below are some of the notable ones accepted: 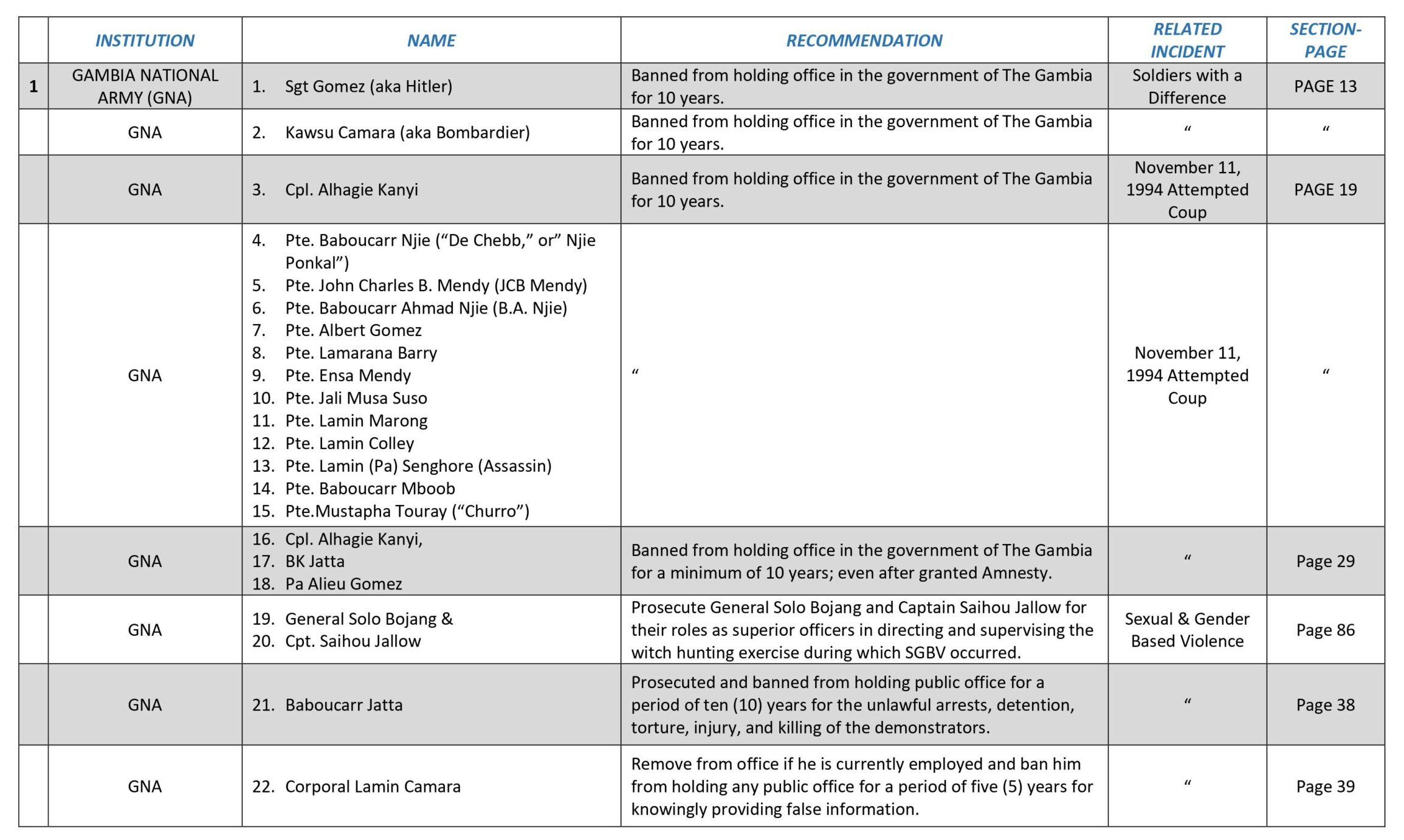 The TRRC also recommended for security personnel to be trained.

Responding to the TRRC in its white paper, the government said: “security personnel were not solely responsible for perpetrating the witch-hunt as these also included a section of the public”.

The White Paper added that “the Government will not only conduct training for the security personnel but also work with the National Council for Civic Education (NCCE), CSOs, religious leaders and community heads to spread awareness and sensitisations on the negative impact of branding individuals as witches and wizards”.

This article was first published on FactCheckGambia.Org on the link below.

FACTSHEET: What You Should Know About Yayha Jammeh’s Witch-Hunting Exercise