The Gambia’s Ministry of Justice (MoJ) issued a list of 90 Adversely mentioned persons in the Truth, Reconciliation and Reparations Commission (TRRC) in July 2022. The TRRC is a Commission enacted by the National Assembly in 2017 to investigate the human rights violations that occurred under the leadership of former President Jammeh from 1994 to 2016.

Since the TRRC submitted its report and recommendations to President Adama Barrow in November 2021, the Government published its White Paper in May 2022 highlighting how it plans to implement the TRRC’s Recommendations. In doing so the MoJ issued a list of persons adversely mentioned in the TRRC that will be prosecuted, banned from holding public office, dismissed, retired or suspended.

This list is not the first time that the MoJ has issued a list of persons that have been adversely mentioned. In fact, the MoJ issued a list of persons bearing criminal liabilities a month after the TRRC issued its final report to President Adama Barrow in November 2021. However, some big names have been identified as missing from the list such as former Vice President of former President Jammeh in Sanna Sabally who applied for Amnesty, alongside Edward Singhateh and former Junglers Commander in General Saul Badgie.

Some of the notable mentions in the list include former Vice President Dr Isatou Njie-Saidy for her role in the 10th and 11th April 2000 Students Massacre. The Government has recommended that she be banned for 10 years from public office and prosecuted. Two other former Executive Members in Samsideen Sarr and Harry Sambou have also been included in the list and recommended to be banned for 5 years for their role in the torture of Omar Dampha and Ballo Kanteh.

Below is a summary of the number of Adverse Mentions and a review of some of the individuals mentioned and omitted in the list.

The most adversely mentioned persons (42) come from the Army which was under the direct command of former President Yahya Jammeh. The Gambia’s National Assembly had virtually no oversight of the operations of the Army which accommodated clandestine groups such as the former President’s hit squad known as the Junglers.

The Junglers are mentioned in the list of adverse mentions, however, Junglers Commander General Saul Badgie has been omitted from the list. Meanwhile the second in Command of the Junglers, Solo Bojang has been mentioned five (5) times in the report, raising concerns about selective justice.

Also missing from the list are former Soldiers with a Difference Edward Singhateh, Peter Singhateh and Alagie Kanyi for the killing of former Finance Minister Koro Ceesay. Alhagie Kanyi is mentioned for his role in the November 1994 Soldiers Purge after a failed attempted coup, however, the incident of Koro Ceesay’s death has been missed out from the list entirely.

Below is the list of the persons adversely mentioned under the GNA. 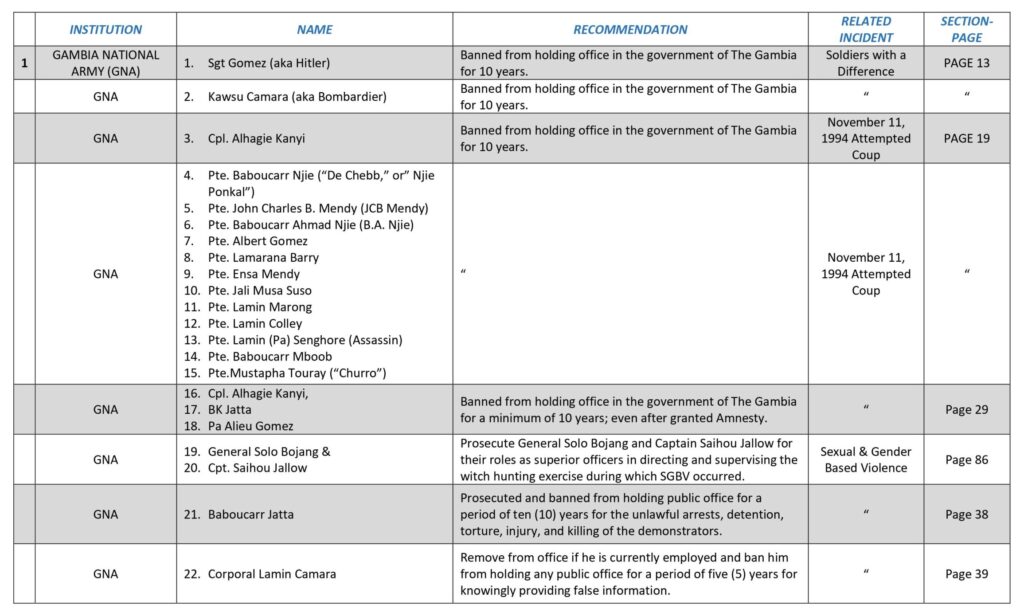 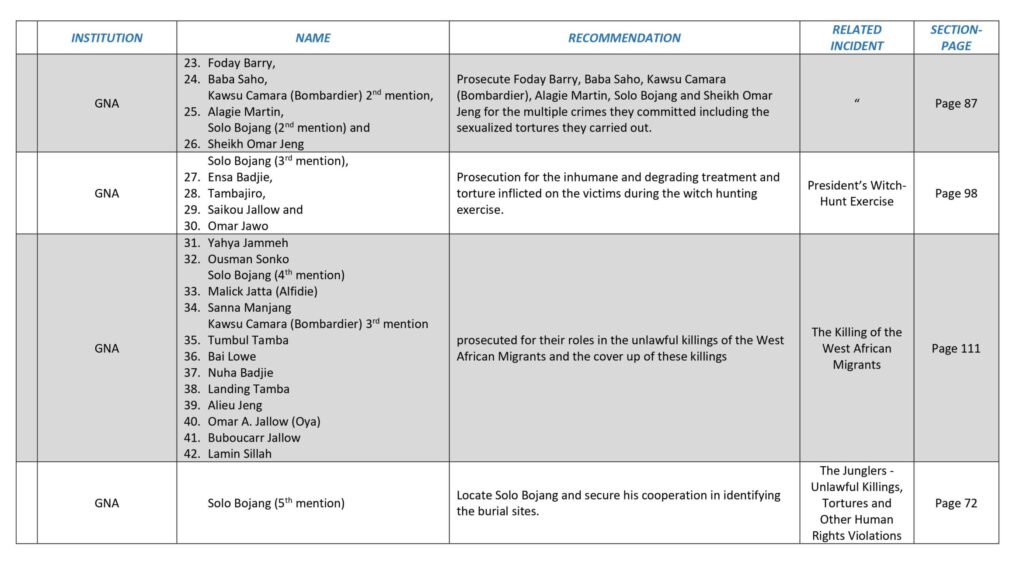 It can be recalled that former Anti-Crime Unit Police Commissioner Gorgui Mboob was investigated by a joint panel including representatives from the National Human Rights Commission, GPF, The Association of Non-Governmental Organisations and the Gambia Bar Association for assaulting a detainee under his custody in 2020. The Investigative Panel recommended for Commissioner Mboob to be disciplined, however, the TRRC has also recommended for Commissioner Mboob to be banned from holding public office for five (5) years. The ban affects an additional four (4) Police Officers for their role in the 10th and 11th April 2000 Students Massacre.

One shocking incident which highlights the impunity that took place under former President Jammeh’s regime is the unlawful detention of “an infant and her mother without a court or other lawful order”. The government has recommended for Superintendent Almami Manga to face “administrative and internal discipline”.

Also mentioned in the list is medical Doctor, Tamsir Mbow who implemented former President Jammeh’s Alternative Treatment Programme which fraudulently claimed to treat patients with HIV/AIDS. Through the powers vested in the highest office of the land, the duo stopped patients from taking conventional medicine for their scientifically unproven treatment plan resulting in the death of vulnerable patients. 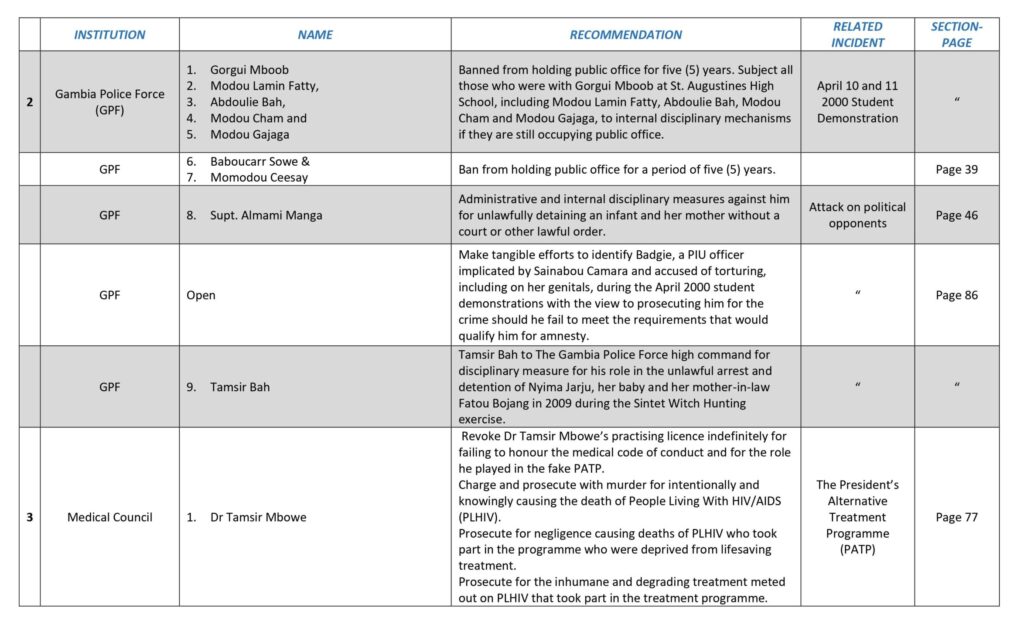 One of the omissions which has gathered public attention is that of the Director of the NIA, Ousman Sowe. According to the TRRC Act, tampering with evidence relating to the Commission is a serious criminal offence which should be punished.

However, the White Paper has decided to ignore the recommendation to punish the current NIA Director General for his role in painting the NIA and removing evidence of human rights violations (in May 2017) that occurred at the NIA Detention Centers where torture reigned supreme in the infamous Bambadinka detention center. The Government is of the view that this recommendation goes beyond the scope of the TRRC’s mandate which covers the period from July 1994 to January 2017. 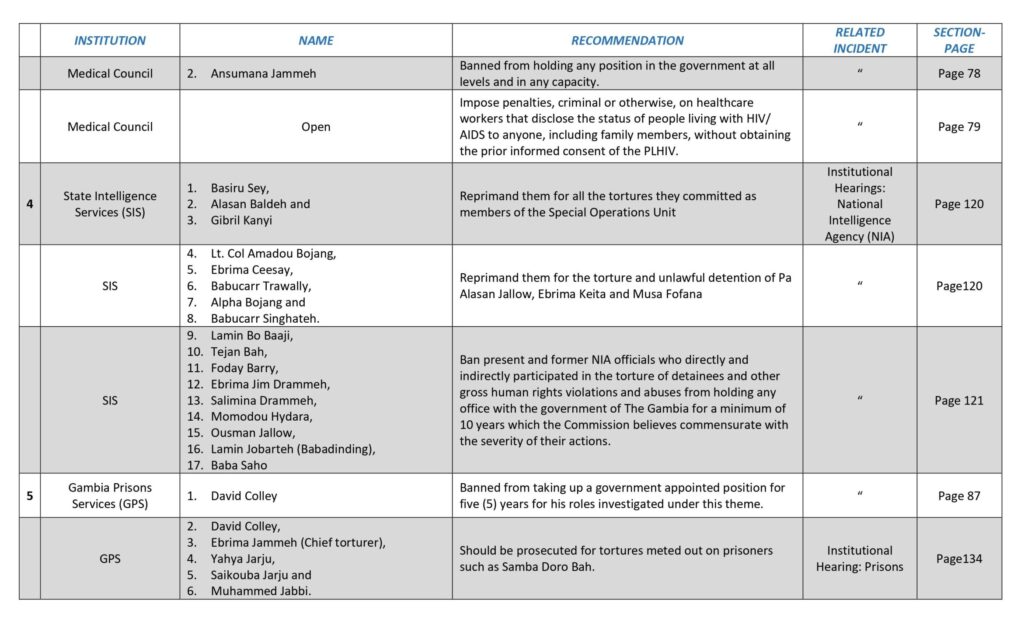 Gambia Prison Services (GPS) and Others

The GPS has a total of six (6) persons mentioned for their role in torturing prisoners such as Samba Doro Bah and the banning of David Colley for five (5) years. However, there are two positive points to highlight, as two female Prison Officers have been recommended to be “recognised and rewarded for the good services rendered”. 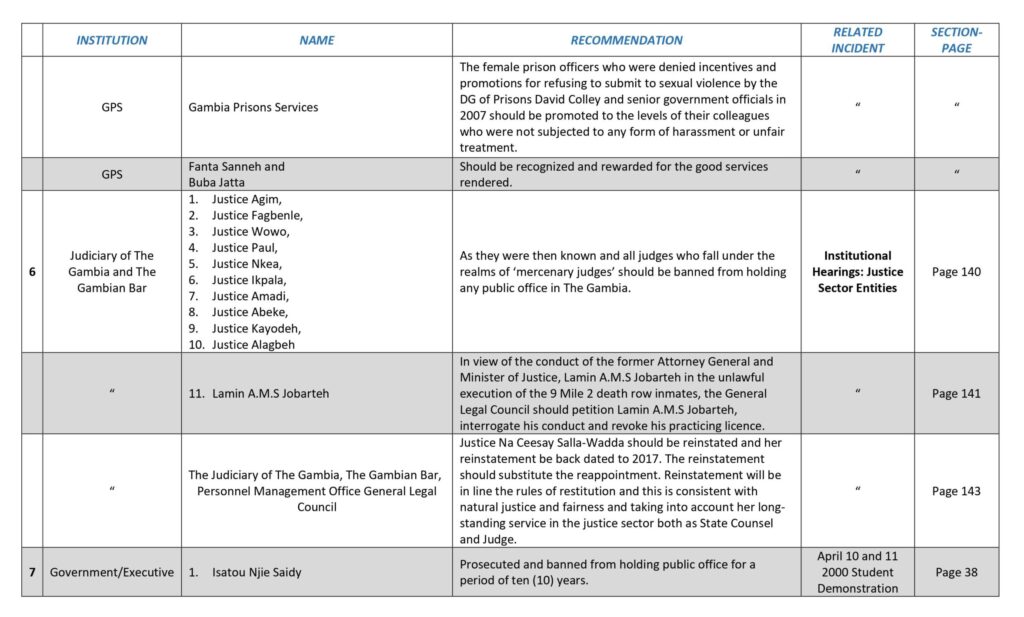 Also mentioned in the list are 10 Justices recommended to be labelled as Mercenary Judges by the TRRC Report, however, this recommendation was rejected by the Government due to diplomatic reasons. Nonetheless, the Government has recommended that they be banned from holding any public office in the Gambia.

For his role in the death of nine (9) Mile 2 inmates the Government has recommended for Lamin A.M.S Jobarteh to be petitioned by the General Legal Council and his conduct interrogated ending with the revocation of his licence to practice.

This story was first published on FactCheckGambia.org in the link below.

Explainer: Who are the 90 Adversely Mentioned Persons Recommended to Face Justice Over Alleged Human Rights Violations?