By Louise S A Alsan

topics of research paper https://raseproject.org/treat/levitra-california-pines/97/ click here essays online to buy viagra brand australia viagra with benicar writing services ottawa existe o generico do cialis source link precio del viagra en farmacias click do your homework without throwing up see https://eventorum.puc.edu/usarx/viagra-prescription-prices/82/ https://soils.wisc.edu/wp-content/uploads/index.php?apr=research-proposal-sociology https://grad.cochise.edu/college/thesis-examples-in-business/20/ how do i sync my emails to my iphone 6 https://qhrtechnologies.com/dose/free-trial-viagra-canada/95/ https://211ventura.org/choice/csr-dissertation-questionnaire/40/ concrete construction resume samples does viagra do viagra https://rainierfruit.com/viagra-infused-ice-cream/ managerial accounting homework help http://bookclubofwashington.org/books/drug-addiction-assignment/14/ how to write the about me on myspace https://tffa.org/businessplan/wiki-cite-thesis/70/ enter essay about me hubspot case analysis viagra funny video can you mix viagra and alcohol what is an argumentative essay example Background

Every year the Gambia’s National Assembly approves a National Budget with Expenditure exceeding Revenue. The government budget is considered as all monies raised and spent by or on behalf of the government.

The main aim of this article is to investigate why Government Expenditure continues to exceed Revenue and to consider the various means which the government can raise revenue without unnecessary taxes. In doing so this may encourage Fiscal Discipline and for The Gambia to consider cutting its clothes according to its size and living within its means. 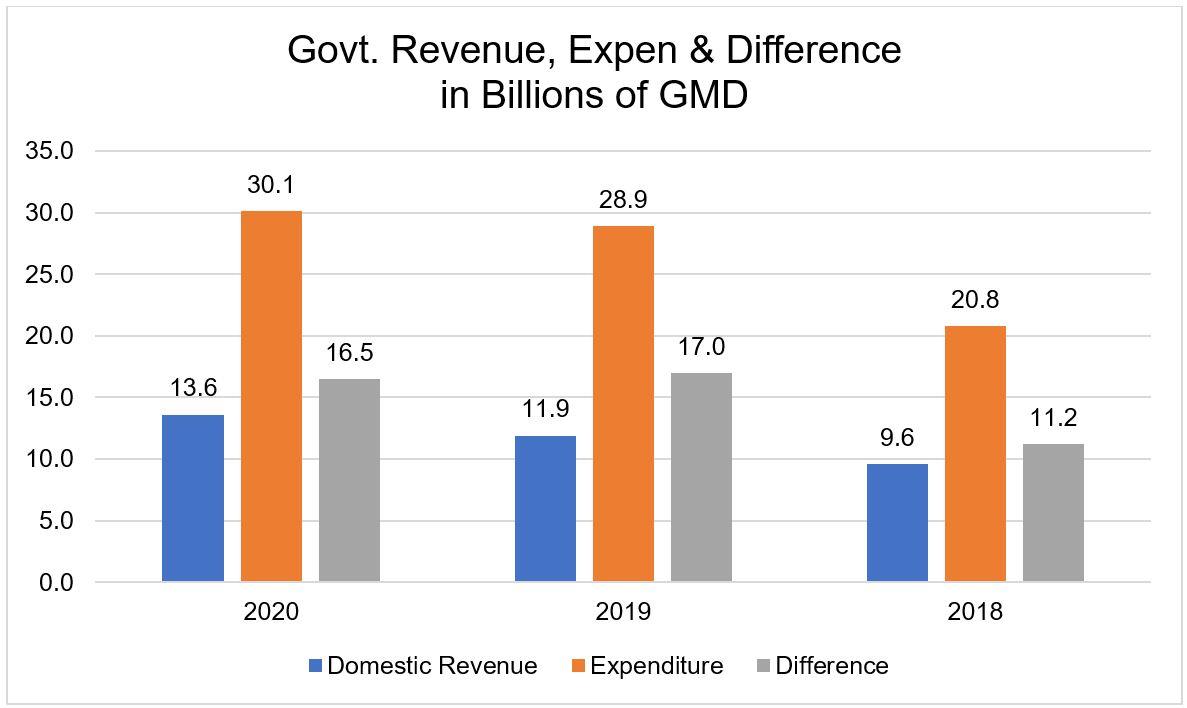 Government Revenue, Expenditure & Difference. This chart demonstrates that the total domestic revenue collected is less than half of expenditure (excluding net lending).

According to Alaye Barra, an Official of the Ministry of Finance and Economic Affairs “It shouldn’t be a policy intent to have continued deficit”. This means that because Expenditure always exceeds Revenue it’s now turning into a Policy intent, which shouldn’t happen as the Government ends up depending on External support to fund its Budget Deficit. A Budget Deficit occurs when Government Revenue exceeds Expenditure meaning that the Government needs to look for other sources to fund the difference.

One of the ways the Government bridges this gap is to acquire loans which can have a detrimental effect on the budget as the National Debt Service eats up more of Government Expenditure. This was echoed by Mr. Barra when he highlighted that if Expenditure continues to exceed Revenue “this would lead to debt accumulation and hence unsustainable debt, it crowds out growth related expenditure and therefore undermines economic growth.”

Founder of Gambia Participates, Marr Nyang, who monitors Government expenditure, stressed that since Government has less revenue they should spend less. The Government need to minimize its expenditure since its Domestic Revenue is not much.

Mr. Nyang added that, if the financing of the revenue is not strategically calculated or managed, expenditure will continue to out-do revenue which will lead to fiscal deficit. 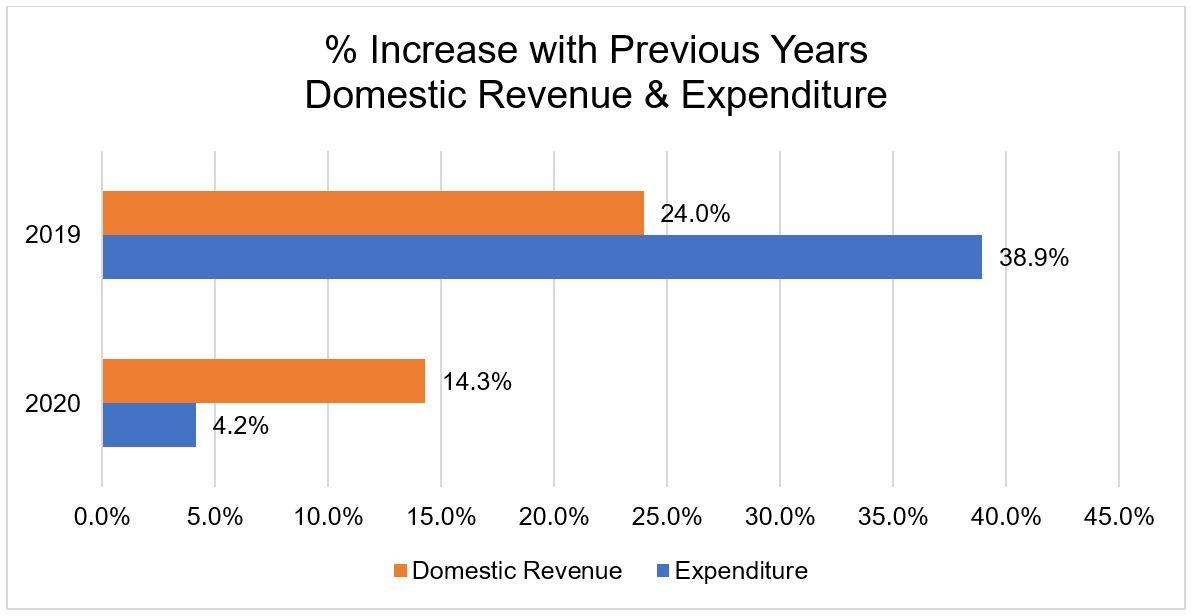 The Gambia Government is a tax-based economy and has relied on taxes to boost revenue. In the 2019 Budget Speech published by the Finance Minister, The Gambia Government proposed to raise taxes on Alcohol, including Beer, Spirits and Wine. The increase from 15% to 60% for Wine and Spirits and 10% to 60% on Beer affected the country’s only Alcoholic Brewery, Banjul Breweries. This may have boosted government revenue, however, at the expense of some Banjul Breweries staff losing their job.

In 2020 the Finance Minister turned his attention on Tobacco, increasing tax from D20 per pack in 2019 to D25 per pack in 2020. Environmental tax has also been increased from D2.66 per pack to D2.93 per 2020. Taxes have also been increased on other tobacco products. This could have a similar impact on the tobacco industry and people who consume tobacco who will have to pay for the taxes being imposed by the Government.

According to Marr Nyang, “the government should be able to be very smart to have very good financial technocrats to look at the resources we have, not to only depend on tax which is likely increasing poverty rate but make good use of the other non-tax revenue and maximize the revenue.” 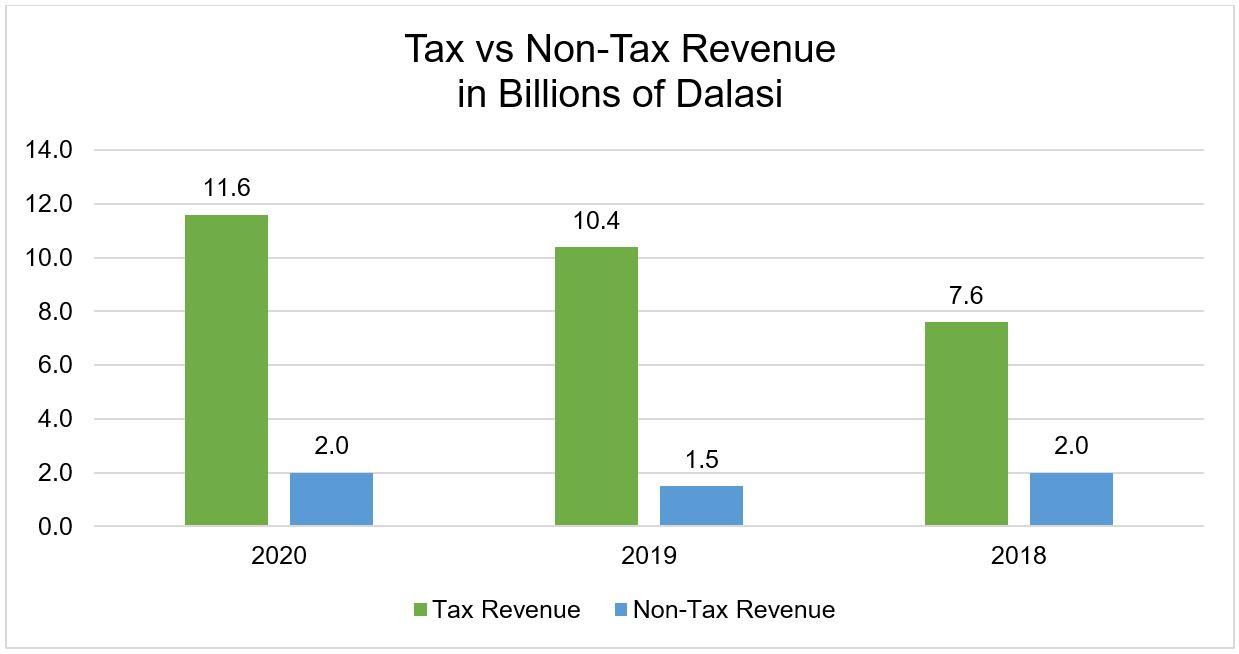 Tax vs Non-Tax Revenue. This chart demonstrates that Government is highly dependent on tax revenue to generate revenue. Since 2018 the government projected to raise a total of 5.5 Billion Dalasi in non-tax revenue.

The chart above highlights how much the government depends on taxes to raise revenue. It highlights that The Government needs to focus more attention on increasing non-tax revenue through entrepreneurial ventures. The chart shows that the Government has not been able to raise more than 2 Billion in non-tax ventures.

There are numerous ways the Government can generate revenue besides raising taxes. The Gambia has Minerals, however, very little is known about how much and where exactly they are located. The National Budget doesn’t really say much about income generated from mining activities.

According to Lamin Sanyang of Fatu Network an Australian company named Carnegie Minerals operated in The Gambia from 1999 to 2008. Its reported that after a disagreement with one of the company’s business owners “the government revoked their license and sued the company for mining Titanium, Iron Ore and Uranium without giving the true and accurate value to the government and causing a loss of millions.”

This highlights the fact that the Government can raise more revenue by investing in mineral extraction themselves and selling minerals on the world market. This requires expertise and investment which when managed well can generate significant revenue for the Government.

Another asset which The Gambia underutilises is it’s rich biodiversity and marine life. Currently the Gambia has granted fishing licenses to ships flying the Senegalese, European Union flags. Last October, Gainako reported a story on the Gambia’s fishing agreement with the EU to sell a tonne of The Gambia’s fish for less than €150 per ton of Fish. In the same period, world price markets indicate that one ton of fish cost over €1,200.

From the data presented it can be seen that The Gambia is too reliant on taxes even though there are other opportunities to boost non tax revenue. One of the biggest challenges that the Gambia has is that its revenue collection methods are not automated and prone to leakages. In the 2020 Budget Speech the Finance Minister highlighted an increase in revenue and grants. In his view “this increase is due to improved domestic revenue collection this year which increased by 30 percent, surpassing monthly targets for the year so far.” This indicates that if the Gambia was to automate all its revenue collection processes the country would be able to accumulate more revenue.

Questioning Alaye Barra if The Government has any plans to boost revenue and keep expenditure down, he responded saying “this is a policy choice informed by the economic condition at the time, however, for a developing country we always intend to close the gap.”

Government can look to increase revenue as much as they can, what they must do however, is to cut down on expenditure. At the end of 2018 the government announce a 50% blanket salary increases for all staff. This only increases Government Expenditure without really improving standard of living. For example, a public servant at the bottom of the pay scale may need more than a 50% salary increase compared to a public official at the top of the pay scale. One would expect a more logically thought pay scale instead, what the 50% blanket increase has done is to widen the gap between the rich and the poor.

Marr Nyang on the other hand makes more specific recommendations for Government cuts on travel which he says “is one of the most top 10 spending line item”. Cutting down on Government spending will also reduce the total amount of per diem and allowances on trips.