You are at:Home»Business Economy»Debt Service projected to consume over half of Government Revenue in 2020

Over half (57%) of The Gambia’s 2020 domestic revenue has been allocated to debt service in the 2020 Budget (MoFEA, 2020 Budget). Revenue is all the domestic tax and non-tax funds that the Government aims to acquire in 2020 and debt service is the yearly National Debt Service allocated to pay off the country’s loans. Last year The Gambia allocated D4.8 billion to the National Debt Service and this year saw a meteoric rise to D7.7 billion.

The increase would have been much higher if the National Assembly had approved the Draft 2020 Budget Estimate tabled by the Finance Minister, Hon. Mambury Njie in November 2019 which appropriated D9.4 billion to debt service. After the National Assembly’s amendments, debt service was reduced by D1.7 billion. This was confirmed by the National Assembly member from Fulladu West, Hon. Sanna Jawara, who informed his followers on social media that “D1.7 billion is trimmed off the financing gap through debt restructuring bringing both total debt interest and domestic borrowing down.”

The purpose of this report is to provide some post budget analysis on The Gambia’s debt which also impacts on how much can be used on other priority sectors which could eliminate poverty and hunger. The country’s debt burden is continually increasing and often information on debt is not readily accessible. According to Hon. Sanna Jawara, The Gambia is still paying off debts from the first republic. This highlights the inter-generational aspect of debt burden as one generation places a huge debt burden on future generations due to unsustainable debt practices. 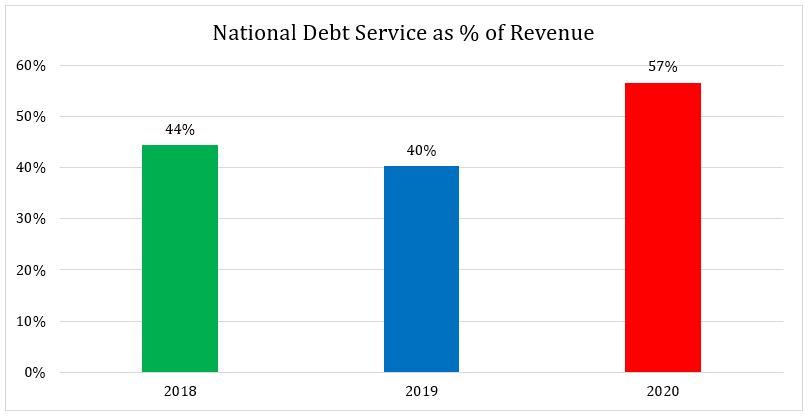 The increase of D2.9 billion on National Debt Service from 2019 to 2020 represents an increase of 61%, the highest increase since President Adama Barrow won elections in late 2016. Meanwhile, total domestic revenue is increasing at a very slow pace of 15% between 2019 and 2020. This trend was highlighted by the International Monetary Fund (IMF) who issued a press release in May 2019 highlighting that “debt sustainability continues to pose a major challenge, given the high public debt and debt service, with the latter absorbing more than half of domestic revenue.” 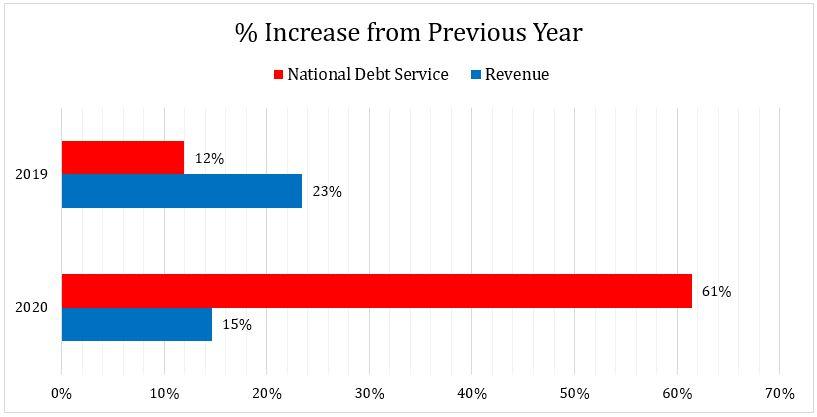 According to the Finance Minister’s 2020 Budget Speech “the stock of public debt in the first three quarters of 2019 stood at D71.3 billion compared to D65.9 billion in the same period in 2018. Of the total public debt stock in 2019, domestic debt accounts for D32.9 billion whilst external debt constitutes D38.4 billion of the stock. Over the period under review, the stock of domestic debt decreased by 5.2 percent while external debt increased by 23 percent.” This indicates that the Government is still accumulating more funds outside the country leaving it vulnerable to external creditors when they demand for loan repayments. 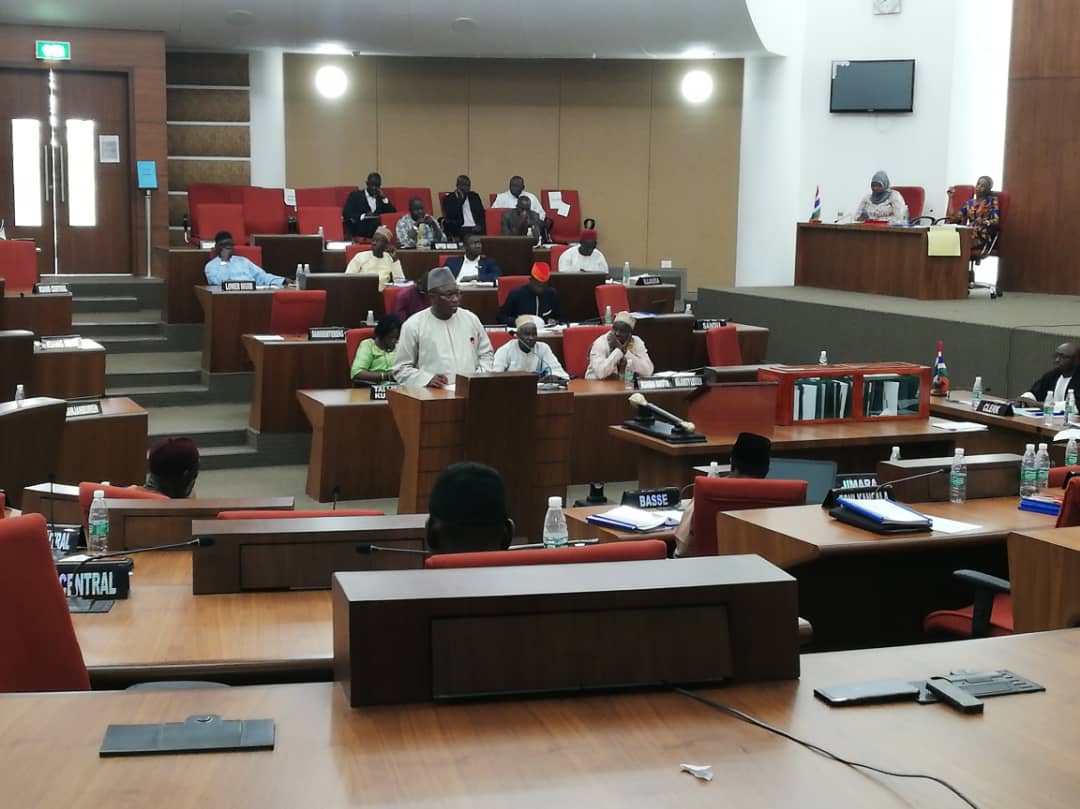 During the 2020 Budget Speech, the Finance Minister highlighted that The Gambia requested “from its external creditors for debt restructuring to defer, for a period of 5 years, both interest and principal payments on loans owed by Government.”

Debt restructuring in this context is a process which allows The Gambia Government to reduce and renegotiate its outstanding debts. This process is usually employed by entities facing cash flow problems and financial distress to enable them continue operations.

The Draft 2020 Budget Estimates includes a D2 billion budget entry for Debt Restructuring as an income. To clarify this, Hon. Sanna Jawara confirmed that the amount allocated for debt restructuring is not an income but a debt which The Gambia was due to pay in 2020, however, negotiations have been advanced for additional time to complete repayments. Meaning that the debt which will have to be paid eventually at a later date agreed with creditors.

One impact of the spiraling debt service according to an IMF Assessment on Public Investment Management is that “domestic resources for investment are limited, with funding for the capital program coming primarily from donors.”

Earlier in August 2019, Gainako reported that a $93 Million USD Loan and Grant agreement was signed with the Saudi Fund for Development for Infrastructural upgrades in preparation for the Organisation of Islamic Countries conference scheduled to take place in The Gambia. Questioning if such loans ratified by the National Assembly are justified, Hon. Sanna Jawara explained that they could be justified if the construction of such roads will drive enough economic activity for The Gambia to generate enough revenue to pay off its debt.

According to Civil Society advocate, Marr Nyang, founder and CEO of Gambia Participates, if more funds are allocated to debt service, this will  “increase poverty instead of the contrary because if 36% of the budget is going to pay loans meaning the remaining percentage are going to be spent on different sectors … like health, agriculture, roads, etc. this is not going to be enough.” Gambia Participates engages in public sensitisation on the National Budget and usually organise pre-budget round-table engagements with the Ministry of Finance and other Civil Society partners.

According to a retired government economist, mounting debt service will increase poverty only if “the net benefit, mainly economic and social benefits of the loan is negative. The general case is when contracted loans are utilised mainly for consumption rather than for productive ends. However, the exception is when loans are used as social overhead capital to build capacity for enhanced production in the long-term.”

According to Mr Nyang “if you empower farmers by giving them support you are providing the means to minimize poverty but instead if you take a good chunk of that money to pay debts it’s like you are working for your debtors.” In his view not only will it have a “negative impact on our people” it will also have a negative impact “on our economy”,  adding that “it is going to decrease the value of the [Dalasi] currency and if we keep having the economy going down that will also promote fluctuation of prices so there is going to be price inflation in our goods.” This is simply the undesired or unintended inflationary effect. 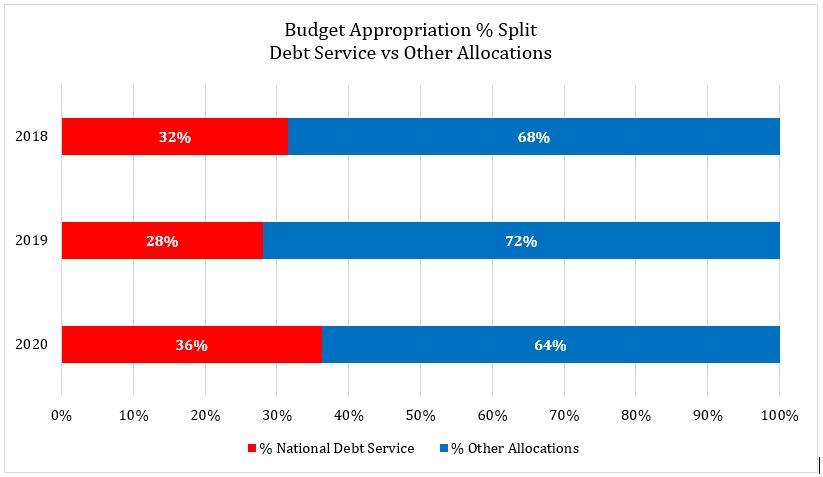 Budget Appropriation percentage split by Debt Service and Other Allocations. This demonstrates how much of Government spending is on other sectors such as agriculture, health, education etc vs debt repayments. © Author. Source data MoFEA, 2020 Draft Estimates and 2019 Approved Budget

Speaking to a retired government economist confirmed Mr Nyang’s claims, adding that payment of external loans is usually done in foreign currency meaning that anytime the government looks to pay off its loans it needs to acquire foreign currency and this could have a detrimental impact on the dalasi.

Calling examples like Sri Lanka, Mr Nyang highlights that creditor organisations could seize The Gambia’s assets, like Gambia Ports Authority when Gambia defaults in its payments. Mr Nyang warns that “what you have seen in other countries, the Chinese have confiscated their ports because they were unable to pay the loan they have from China. So, the same thing is going to happen to The Gambia if they keep taking loans and they don’t pay the loans on time.”

What stood out the most from my engagement with Mr Nyang is his assertion that “the 36% percent that has been allocated to finance debt is only for some identified creditors that the government is paying but there are other domestic companies like Pristine Consulting that government is owing $68 million US Dollars that have not in fact received a single penny from the government of The Gambia.” In his view Gambians are not seeing the benefit of these loans and that taking more loans will see debt service “outdo all the other budget entities and the debt stock will continue to increase.” 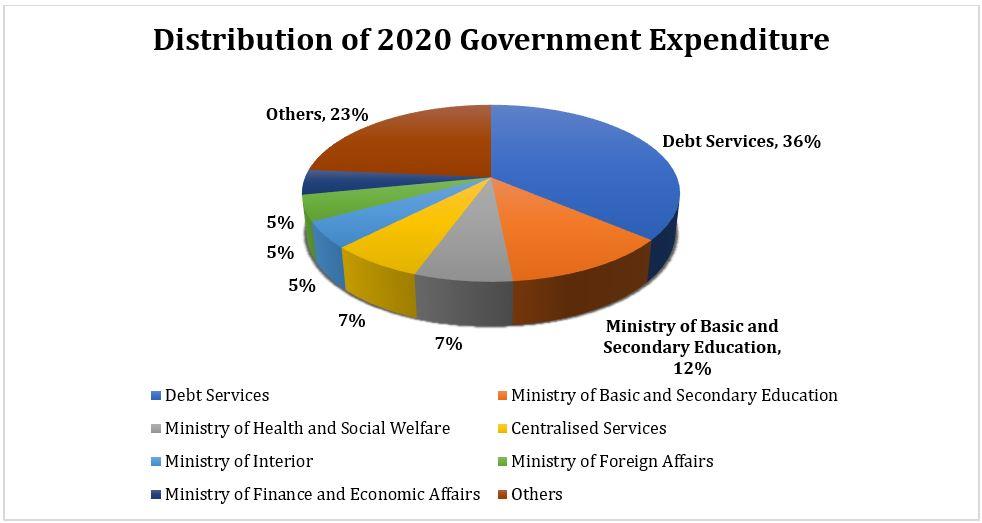 According to Mr Alaye Barra, of the Finance Ministry the best way to alleviate The Gambia’s Debt Stress situation is to borrow money “mainly for capital investment that has the potential of self-financing i.e. investment that could yield return to ease out repayment difficulties once they fall due.”

Marr Nyang, however, believes this should go further, he recommends “that is not only by allocating budget to pay them [outstanding debts]but if you are paying debts and you are also continuously taking loans simultaneously everything is going to increase meaning the debt that you are paying is going to be nothing if you are still taking loans.” In his view the only way Government could reverse this trend is to “pay loans and to stay away from taking loans because the more you take loans the more the debt burden increases.”

On the other hand, Hon. Sanna Jawara explained that no country can avoid taking loans, what is important is how the loans are spent. In his view loans should only be spent on sectors which have the potential to generate income to repay the debt. In his view sectors like Agriculture and Fisheries should be invested in as they have the potential to generate revenue to pay off their debts.