You are at:Home»News»CRC Chair “there is a view that Diaspora Gambians are elitist”

Constitutional Review Commission Chairperson (CRC), Justice Cherno Jallow revealed during today’s Right2Know Diaspora Conference with the CRC that the deadline for the end of public consultations is the 15th of June. At the start of his submission Justice Jallow highlighted that “just for the information of our brothers and sisters, it seems to be male dominated I assumed from the Diaspora well hopefully you’ll have some [gender balance]”.

Explaining why we cannot simply codify nor legislate the type of character criteria for elected Gambian leaders he opined that “what builds a character is more than what is written”. Highlighting one of his findings on the general perception between Diaspora and Resident Gambians he stated “there is a divide between Resident and Diaspora Gambians. There is a view that Diaspora Gambians are elitist”.

Responding to questions on continued voters registration he highlighted that it was important, however, a cut off point will be included before elections, how long should that be before elections? 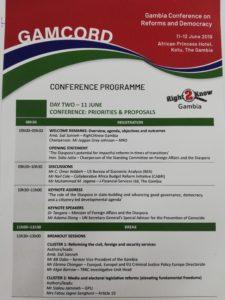 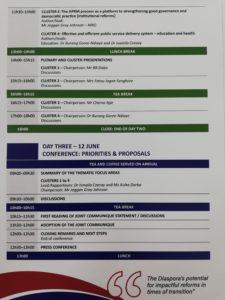 Coach Pa Samba Jaw, a well known Gambian Diaspora Activist with the Democratic Union Gambian Activists (DUGA) recommended that Gambians should have a one term presidency. His justification is that “we have been taken back by people who never wanted to leave power. We have Barrow who can potentially try to go for 15 years to what end? We’ve had independence for what 54 years, three presidents.

“I believe that 5 year Presidency would at least focus whoever becomes President on the task at hand. If you do good your Party will be re-elected. If you do bad we’ll move on to somebody else.

He also advocated for ‘Life Term Limits’ meaning that President’s can only serve for one term, ever. “If you’ve ever been a President for one term you cannot serve again. Lets have a country of former Presidents.

According to Coach ‘I don’t think we need an Army in the Gambia I think what we need is an effective security force that could be the Police. Even if we have an Army what are we going to do, we cannot fight against anybody. Its just eating up into our budget for no reason”.

Asked if the Army can go into farming Coach responded “that’s nonsense, first of all is they cannot carry out their regular job what makes you think they can do a better job with farming”. The danger of the Army engaging in the Agriculture sector was widely denounced with reference to Egypt’s Military which has a tight grip on their market.

On Security Sector reforms, Gainako’s Flex Dan recalled that last year a flooding disaster had destroyed many homes in Kuntaur, can the Military engage in disaster preparedness for future floods. In so doing the Military can conduct rebuilding and venture into construction.