Earlier in the day, President Goodluck Jonathan visited President Barrow’s private residence in Mankamang Kunda. President Adama Barrow’s Official State House Facebook page wrote that “the former Head of State is in the country on the invitation of President Barrow and was accompanied by the Ministers of Foreign Affairs and Justice, Dr Mamadou Tangara and Hon. Dawda Jallow, respectively”.

According to an attendee, Journalist Abubacarr Saidykhan, an evening dinner meeting took place around 7 pm in the evening with Political Party leaders and Stakeholders at Coco Ocean. Mr Saidykhan said that “what I understand is that the Ministry of Justice is working in collaboration with International IDEA”.

According to Mr Saidykhan, Dr Goodluck Jonathan made it clear that he was not there to force anybody to accept or not to accept the Draft Constitution. Learning from other African countries Constitutional crisis does not actually mean war between people killing each other. 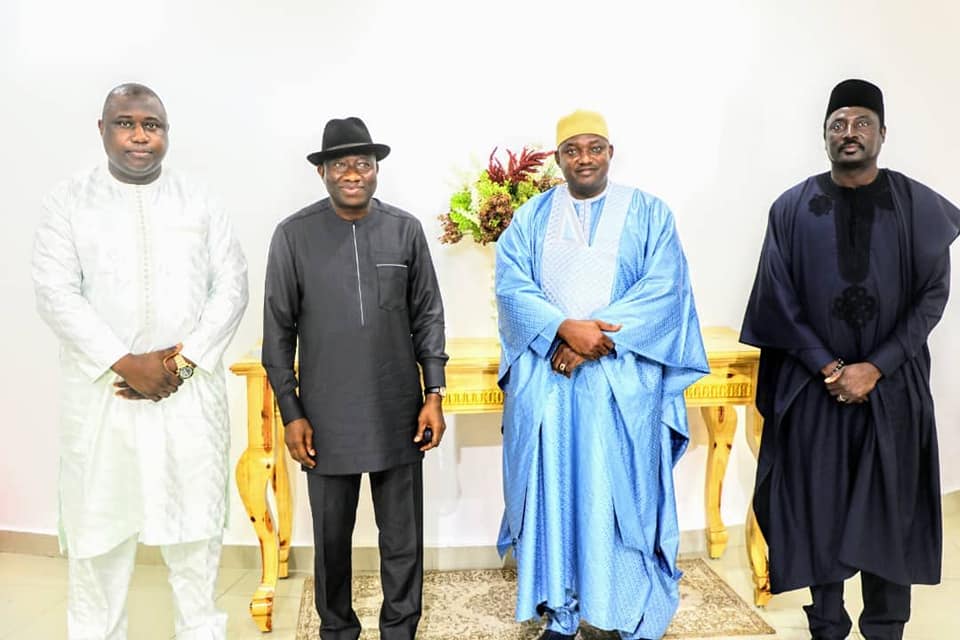 National Assembly member for Banjul South, Hon. Touma Njie took to social media to declare her support for the Constitution Building talks saying “I welcome the intervention of Int IDEA and in extension welcome HE Goodluck Johnathan and the move to have him mediate. Welcome to The Gambia HE and I wish you successful deliberations. I urge and appeal to the people of Banjul South to also do so.”

Civil Society Leaders, members of the Media and members of the TRRC were also present. TRRC Deputy Lead Counsel, Dandeh Jabbie highlighted that the 1997 Constitution cannot be used going forward.

However, there were some notable omissions as Hon. Halifa Sallah of the PDOIS, Hon. Hamat Bah of NRP and Mai Ahmed Fatty of the GMC were not present at the meeting.

Mr Saidykhan noted that the event concluded around 12:00 midnight. A number of political actors present raised concerns that President Adama Barrow was not present at the meeting. Stressing the importance of President Barrow’s appearance at the event, GAP Party Leader, Ousainou Batchilly emphasized that it would have been a milestone for the event had President Barrow graced the occasion.

Bilateral meetings between Dr Goodluck and Political Actors are expected to take place today, 19th December 2020 and it’s expected that the Consultations will continue. Six of the contentious topics which have been identified are on Presidential term limits, retirement benefits for Judges, President’s low impeachment threshold, Parliamentary confirmation of Ministers, Citizenship and the Justiciability of Economic rights.

Speaking to Regional Director for International IDEA, Professor Adebayo, he informed me that at the end of the Consultation process another Bill will be prepared taking into consideration the consensus-building exercise while ensuring that the Constitution passed at the National Assembly also gains popular support at the referendum.

Our first publication on former President Goodluck Jonathan’s trip to The Gambia is available below.