United Democratic Party lawmaker, Hon. Sanna Jawara of Upper Fulladu West has accused President Adama Barrow of bribing National Assembly Members (NAMs) with D10,000.00 monthly payments in “brown envelopes”. In the space of two weeks, now emboldened President Barrow has seen two NAMs raise impeachable concerns about his conduct. Exactly two Saturdays past Hon. Touma Njie of Banjul South took to social media to “call upon every Gambian to call on their respective MPs to ask the president to step down” over the Semlex ID controversy.

This Saturday Hon. Sanna Jawara confirmed to Gainako news that the approach to bribe him with a monthly salary was made by Lamin Cham currently assigned at State House. Asking the whistleblower to confirm if the social media post actually originated from him he said “all I said is true and I have no concrete evidence to support my case. So far I don’t want to comment on issues”.

In a counter statement Hon. Omar Ceesay of Niamina East took to social media challenging the UDP whistle blower to a debate to clarify the bribery allegations. “On a more serious note, I am calling on him for a debate to clear the following: 1. When has that started and on what ground? 2. Who are the NAMs involved in receiving the said sum? 3. Why he has never disclose this matter to the National Assembly during the passed sittings?”

Speaking to Gainako News the lawmaker from Opposition party Gambia Democratic Congress (GDC) explained that “when this allegation was posted on social media I gathered all my fellow colleagues in the same party, that’s GDC. I asked them about the allegations. All that they told me is they have never received such an amount from the President.” When questioned if GDC NAMs have received an offer from the President he denied that out of hand.

When questioned if he is denying that NAMs are receiving bribes he explained that “I am not sure of [other NAMs]but for the people that belong to my party the GDC those people they are never and ever involved in such. That I can defend to any level.” Turning the focus on to him I asked if he has taken any money to which he responded: “I am part of them who are not involved in such”.

On the alleged five UDP NAMs who accepted the D10k monthly bribe, he stated that they are investigating the matter. Asked if he took a vehicle from the President last year, he confirmed that he has accepted the vehicle in order to be mobile. When pressed further on the anonymous donor source he retorted “all that I can say is that the source of the vehicles for me is from the National Assembly and that I can say anywhere.”

“The NA made an assurity to come and hand over this vehicle to me and I am there to take it but I don’t want to know where actually obtained this vehicle. I think this is a question that he answer for [President Barrow] but not me.” 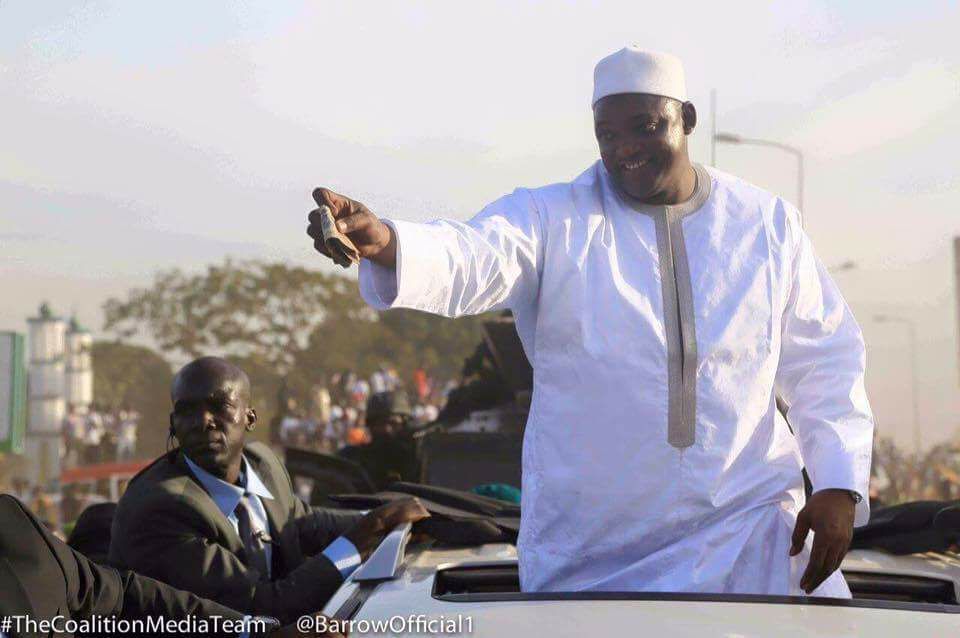 According to an unconfirmed list published by Wandifa Sanneh he lists the alleged five NAMs that have taken “brown envelopes” from the President. “This is [the]list of UDP MPs who are alleged to have been recipients of an amount of D10k as bribery from President Barrow. Bilay G Tunkura of Kantora, Saikou Marong of Latri Kunda, Fatoumata Jawara of Tallinding, Saikouba Jarju of Busumbala and Alagie Jawara of Lower Badibu.”

Gainako will aim to contact the above named NAMs and all other NAMs to confirm if they have been approached by President Barrow or his entourage with an offer. If these allegations are true then the words of Hon. Jawara must trigger some deep soul-searching for the two branches of Government. Even more concerning is the question he poses “I wonder if the same offer is made to the Judiciary?”

“Instead of holding every Executive Public Office accountable, is this what we resort to? We are on the verge of betraying the trust and confidence of the Gambian people by sacrificing every fiber of our being.” ~ Hon. Sanna Jawara