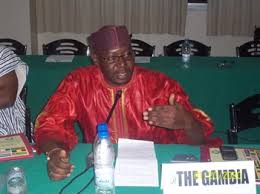 Mutual recriminations are decimating our resolve against tyranny. At the heart of this folly is the unbridled positioning and jostling within the struggle for personal and group advantage for what is often described as ‘post Jammeh era’. Well Jammeh will not just disappear by hoping that he does. While some continue to indulge in this fanciful inclination of hoping against hope, only concrete action will get us there. Instead of closing ranks to end Jammeh’s rule, some are engrossed in assuming the role of self ‘anointed’ transition leaders at the end of a dispensation that is prodigious at reinventing itself. Misplaced priorities, self before country and fierce antagonism in out-performing each other particularly in the art of the negative, seriously threaten the unity and progress of all opposition forces, both at home and in the diaspora. These are dangerous vices we cannot afford to entertain any longer.

To quote a young lady who sent an email from Bristol, UK, “there is prevailing personal attack-fatigue”. She underscored that “something be done to stop it so that we can make real progress”. Similar sentiment was conveyed to me during a Skype communication from another Gambian youth in Madison, USA. We concur. They urged leaders not to allow individual differences to prolong their destiny and negatively impact their future for a peaceful, democratic and prosperous Gambia. Clearly they speak the minds of most young Gambians yearning for a radical break with politics as usual. These are the voices – the youth – the future leaders of our Nation that truly inspire us, and it is for them that we are in public affairs. Being the most youth oriented and gender sensitive political entity, we are determined to work with like- minds across the board in building a Gambia of their dreams. We believe that all areas of government must reflect the intrinsic values of women and the youth in policies and programs. As a father, there cannot be a more imperative plea than expressed by these Gambian youths.

From inception, we committed ourselves never to pander to irresponsible politics. Our record shows that issues most dear to Gambians have always characterized our political discourse and will continue to influence our approach to public policy. This is partly because the youth look up to all of us for guidance and as role models. Ideas do matter, but most of all, enduring values are what will direct our national compass. These are what will sustain the foundations of our existence. For the sake of The Gambian youths, we must strive to be better parents and role models first, then good public figures. The best way to do this is by according priority to their aspirations; by putting public interest above the personal; by uniting for a common cause and at the instant, ending tyranny.

Those who seek to hit below the belt are often barren of ideas, cannot hold themselves in the contest and conquest of ideas, thereby resorting to the cowardice of divisive politics or subjecting others to public opprobrium. Those in power and authority resort to censorship, political persecution and tyranny. Our Nation must not grant credence to such an incongruous community of pretentious individuals as they seek to distract, set us backwards or scavenge at elusive relevance.

For us, the wheel of change has no reverse gear, and that is why our transformational agenda provides for a stronger nation – indivisible, prosperous and free. We cherish the inherent value in open debate, free expression and the exchange of ideas on fundamental national exigencies. Our position remains that free speech should not be policed or legislated against. Yet, we ought not to encourage vitriol, excesses or malicious propensity in the guise of tolerance and diversity inimical to the overriding goal of ending tyranny or contrary to national unity and social stability. We must summon the courage to condemn

irresponsible speech, for we believe that demanding sanity in public discourse is not at variance with the sublimity of free speech. We know too well the vitality of free expression, and will go to all lengths to preserve it. Notwithstanding, in the exercise of this noble right, we ought to advert our minds to the public good and the monumental historic task at hand – the struggle.

The repugnance of decent voices against unrelenting personal attacks from quarters that are expected to know better, but know nothing better can no longer be silenced. Voices of conscience must be unanimous and decisive in heaping down the voices of division and recrimination among us, for that is what true leadership demands. The relevance of any individual or leader in public affairs will be determined not by the character of sonorous speeches, but by the defense of the truth, objectivity and principle. This too will constitute solid record with tangible results in the service of The Gambian struggle.

Those with no ideas or agreeable results to offer, conveniently resort to trivializing the sacrifice and industry of others, while attempting to cast fishing nets in different tantalizing political ponds. Deceit cannot be dissolved in vile and blank rhetoric for too long.  Gambians are no fools and no individual, politician or civil society leader should anticipate thriving by playing with the intelligence of Gambians. Those who practice this will usually stop at nothing unless they feel secure in fabricating and totally annihilating the personal character of the few they deem threats to their personal ambition for fame, power and greed. One can no longer hedge the art of divisionary and diversionary tactics against the prospects of public gullibility. Not anymore. As we confront forces of disunity, they must be compelled to the resignation that those days are done with for good.

Most societies that failed were caught up at the cross-road between two choices – the pursuit of individual ambition versus the public good; between forces of continuity and change; between the lures of appearance and the starkness of reality. This is where we are approaching, though we are not there yet, and God forbid. When individuals, politicians and civil society leaders in their reckless pursuit for power, grandeur and public relevance jettison basic principles of decency in their own dealings or in the conduct of public affairs, significant national priorities become the inevitable casualties. This is how the greatest promise of people-power since the last decade, was prodigalised with the hopes of millions of citizens in the Arab Spring nations frustrated. Nearly two decades earlier or beyond, failed nations were erected on the foundations of the very characteristics upon which we are now tethered.

Failed nations are created by the failed leaders and individuals who charismatically bait hordes of millions into disastrous dreams for personal political profit. Failed nations are produced by selfish civil society and political elites with their allies by exploiting the vulnerability, gullibility and ignorance of the masses with astounding ingenuity.  They start with personal attacks and ethnic bile to distract the political debate from core issues where they are intellectually deficient; balkanize, then seek to control the political agenda by captivating the arteries of the polity. To the youth, be assured that we will not permit them; we will stop them in their tracks in whatever guise they may appear. There will be no room for those who seek to divide us; those who transact and thrive only if issues were removed and personality attacks become the attractive stock-in-trade.

Echoing the voice of the youth from Kartong to Koina and across the waves in foreign shores, there is growing despondence with the politics of personal attacks, bickering, disunity or the infantile penchants of some individuals, civil society and political leaders. We are at the brink of a new era. With history as a guide upon the advent of a new dispensation, we in The Gambia have the opportunity to get it right at the first go! It is time to put emphasis from the personal to the collective. Let us embrace our commonalities; Let us embrace unity. Let us allow progressive ideas to flourish and overwhelm riotous proclivity; Let us transition from diatribe to dialogue, enabling us to animate fruitful Gambian family conversation. Let us work together, fight together and win together by accelerating the demise of tyranny. Every Gambian has a role and a place in a New Gambia. To get there, we must as a matter of urgent primacy work together to eradicate the only element between us and freedom. Let us strive together to take back our country and take back our lives. Let’s get to work! God Bless the Republic of The Gambia.