You are at:Home»Editorial»Opinion»A Government That Lies and threatens Citizens Endangers Human Rights! 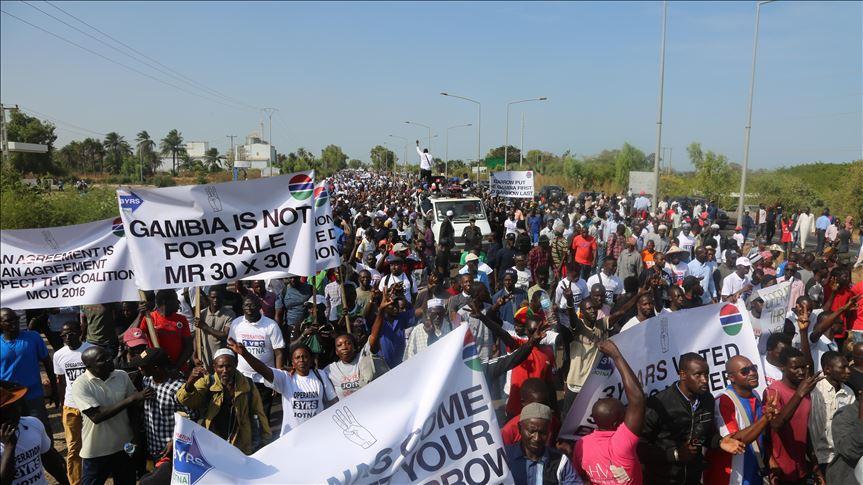 The Jotna Movement staged their protest on December 16 in peace and calm and in total obedience to the requirements of the police permit. Not a single report of violence or hate speech was reported. Yet before the protest, The Gambia Government at all levels continuously spewed lies that this public assembly will bring conflict in our society! For that matter they have caused so many citizens to forego going to work or school, or open their businesses today hence causing huge economic loss to the country.

Human rights cannot be achieved in the absence of openness, accountability and the Government’s expressed commitment to the Constitution and the rule of law. When a Government chooses to deny rights the first thing they do is to concoct lies and misinformation and then issue threats in order to circumvent the Constitution and the rule of law. They do this to generate fear and anxiety in citizens in order to control and contain the people and therefore prevent the people from holding the Government accountable.

Since the Barrow Government was established it appears this act of lying and threats was the first lesson it borrowed from the Jammeh Regime which they seem to be perfecting everyday even though they always get exposed, even if they do not get ashamed or afraid of lying and threatening citizens again.

The Brikama Rally of the President in June 2018 could be descried as the first major platform where they launched intercontinental ballistic lies and threats when the President of the Republic himself fabricated the falsehood that the Three Years Jotna protest will bring chaos in the country. It was at this same rally where the former Interior Minister Ebrima Mballow and the so-called Youth Adviser Henry Gomez and series of other speakers took turns to either lie or threaten citizens about the Three Years Jotna protest.

The next major platform of lies and threats was the propaganda television show dubbed ‘National Dialogue’ hosted by the President’s Press Secretary Amie Bojang Sissoho in September where her panelists were military, law enforcement and intelligence chiefs among others. In the show, hosted on GRTS top security chiefs concocted lies and threats that the protesters will be on drugs and will burn down this country. The Army General Mamat Cham went even further to say that the army was ready to confront citizens as if the Gambia was facing a foreign invasion!

At various other times the Minster of Information Ebrima Sillah and the Government Spokesman Ebrima Sankareh also joined the lying and threats jamboree to claim that this protest will cost the country dearly given the festive season in December. Because of these lies and threats we saw the Ministry of Youth and Sports go to the ridiculous height of postponing the NAYCONF which was to be held at this time. Continuously we saw this Government use every opportunity to scare citizens by highlighting security concerns with the NIA even going bonkers saying social media is a challenge to national security.

Because of these lies and threats they have managed to influence and scare so many citizens to the point that citizens began to engage in severe infighting among themselves. Some strongly believed the lies of the Government that the protest will undermine the economy, destroy tourism and cause conflict in the country. Those who support the protest are vilified as unpatriotic while they also in turn would severely caricature other citizens who oppose the protest. In the end the Government’s lies only succeeded in dividing the society thereby undermining national unity, peace and progress of the country.

Such a situation only helps to undermine democracy and injure human rights because when people are preoccupied with lies and threats they tend to not realize how their best interests are being eroded. If only citizens could see through the lies and threats of the Government we would have realized that we should rather unite and demand honesty and truth from the President and his Government. By failing to reflect on the statements from the Government but rather swallow those lies and threats hook, line and sinker the people only succeeded in dividing and weakening themselves.

But today we have all witnessed the protest and no one saw any single incidence of violence and hate speech. The protesters respected the permit even though that permit was utterly unreasonable, ridiculous and intended only to suppress the protest. The Government only gave that permit because they realized that, after all, their lies and threats were unsuccessful and so they decided to issue a permit intended to further weaken and derail the protest. But they failed.

Therefore, if there is any lesson to learn is that citizens must become vigilant and smart so that we listen carefully to what the Government tells us so that they do not divide and weaken us with their lies and empty threats. This Government led by Adama Barrow is a Champion of Lies and Threats next to only Yaya Jammeh’s Regime if not higher. And this is where citizens must be concerned and become even more vigilant. When a Government is ready to lie and threaten its citizens then such a Government is not committed to democracy and the protection of human rights. This is the fact of history.

Let us defend our Republic. Let us not sit by and taking things for granted as we have been doing for more than 50 years. Let us not underrate any word or action from the President and his Minsters and Generals. When we ignore or take things for granted or merely underrate the State rest assured we will soon find ourselves in a sea of tyranny. Mark my words!

Don’t accept a Government that lies like a passerby!

For the Gambia Our Homeland