The Gambia’s Independent Electoral Commission (IEC) has announced the results of the 9th April 2022 National Assembly Elections indicating that 33 new National Assembly Members (NAMs) have been elected and 20 incumbent NAMs have retained their seats.

After comparing the election results from 2017 and 2022 it can be seen that the biggest increase is by the NPP who has accumulated a total of 17 new NAMs. NPP’s first NAM, Hon Birom Sowe who was elected after a By-Election in November 2020, brings the total number of NPP NAMs to 18. NRP and APRC have gone into an Alliance with NPP, however, both of them combined lost a total of 4 seats.

APRC is going through a transition after the Party aligned itself with President Barrow’s NPP against the approval of former President Yahya Jammeh currently in exile in Equatorial Guinea. This has led to a breakaway APRC group known as the No to Alliance Movement. Foni, which was previously an APRC stronghold has been taken over by five Independent Candidates including one of the three winning women candidates, Amie Colley of Foni Brefet Constituency.

The remaining two winning women candidates are Hon Fatoumatta Njie of Banjul South who went Independent after a fallout with the People’s Progressive Party. Completing the list is UDP’s Fatou Cham who defeated Hon Baba Galleh Jallow of the NPP in Sanneh Mentereng. Hon Baba Galleh Jallow was one of 8 UDP NAMs who defected to the NPP. The lone person living with a disability, Lamin Manneh also lost in Sanneh Mentereng.

Similarly, another three UDP NAMs who defected to the NPP have also been voted out and replaced with UDP candidates. The NPP NAMs who lost their seats include Hon Alagie Jawara of Lower Badibu, Hon Fatoumatta Jawara of Tallingding Kunjang and Hon Saikou Marong of Latrikunda Sabijie. Hon Saikouba Jarju of Busumbala also lost his seat to independent candidate Muhammed Kanteh who is affiliated to the UDP.

The UDP who won 31 seats in 2017 has lost a total of 16 seats this year while GDC lost all the 5 seats they won in 2017. Both UDP (8) and GDC (2) had a total of 10 NAMs defect to President Barrow’s NPP. Out of those candidates who defected only 5 of them retained their seats. NAMs who retained their seats include two former GDC NAMs in Kebba Jallow of Jarra Central and Salifu Jawo of Jokadu who both won for NPP. Meanwhile, three former UDP Parliamentarians in Hon Abdoulie Ceesay of Old Yundum, Hon Omar Darboe of Upper Nuimi and Hon Billay Tunkara of Kantora have all retained their seats for the NPP. 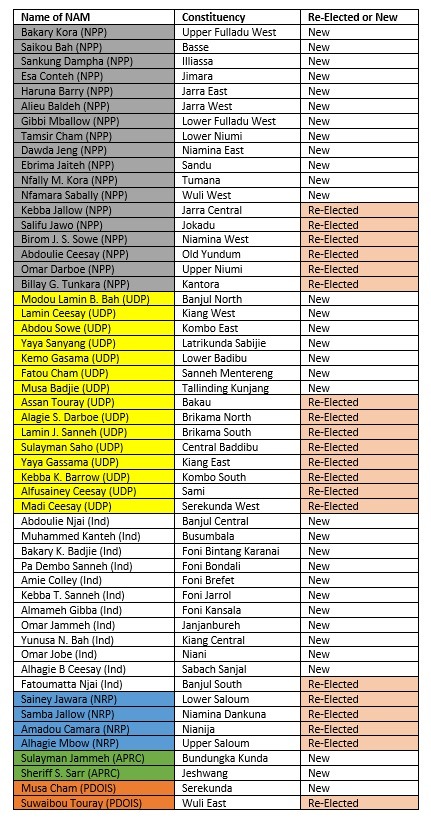